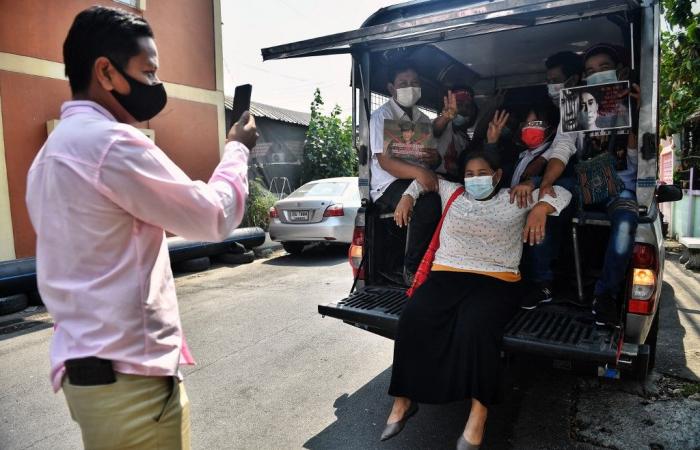 Hello and welcome to the details of ‘Can’t stay quiet’: Thailand’s Myanmar migrants rise up against coup back home and now with the details

SAMUT PRAKAN (Thailand), Feb 9 — Organising protests, gathering supporters and distributing posters of their beloved leader Aung San Suu Kyi, Myanmar workers in Thailand are adding to a chorus of dissent against a coup that has upended their home country.

Thailand’s economy is reliant on millions of low-wage labourers—mostly from neighbouring Myanmar—who largely toil behind the scenes to keep the kingdom’s industries humming.

They live a precarious existence and largely distrust Thai authorities, due to widespread discrimination and frequent crackdowns against illegal workers, and usually keep to themselves.

But a military coup that deposed Suu Kyi has sent shockwaves through the normally quiet community, who have begun staging near daily protests across Bangkok.

“We Burmese who live abroad can’t stay quiet. We all need to go demand justice in front of our embassy and stage protests,” said Kyaw Thu Ya, a worker living in Samut Prakan province, an hour south of the capital.

“I feel uncomfortable because I’m not living in my country and I understand my limits,” he said.

“If I were in Myanmar right now, I’d go out and protest everyday.”

‘No chance to live’

For now, they do what they can.

In a small house, Kyaw Thu Ya gathers with friends to plan a protest in front of the UN office, preparing posters of Suu Kyi, and also some of coup leader General Min Aung Hlaing — superimposed with a large “X” across his face.

“Min Aung Hlaing doesn’t know the word ‘enough’,” said Pu, a Myanmar street vendor who told AFP she hasn’t been able to sleep or eat properly since she learned of the putsch.

Myanmar endured nearly five decades of military rule until beginning an uneasy move towards democracy in 2011, and the 48-year-old said access to education was limited when she was growing up.

“The military didn’t give us a chance to live... so I made up my mind and moved (to Thailand),” she said.

She said the fact that millions move to Thailand to seek work and better lives was an indictment of military rule, under which the country’s economy sharply declined.

“Myanmar has never had a chance to progress due to all the military’s interference,” she said.

“Now that this coup has happened again, I’d fight all the way against it.”

‘The coup ruined everything’

In the protest outside the United Nations building over the weekend, the Myanmar workers sang an old revolutionary song, Kabar Ma Kyay Bu, or We Won’t Forget Until the End of the World.

The song was popularised during a 1988 uprising against army rule, which came to a brutal end when the military gunned down thousands of people in the streets.

The waves of protests now taking place across the country, with some drawing hundreds of thousands in major cities like Yangon, bring back the same fears for the Burmese community.

“When the National League for Democracy (Suu Kyi’s party) won the election, I had hoped that I might be able to go back to Myanmar and start some kind of business of my own,” said Kyaw Thu Ya.

“But the coup has ruined everything. Our future in Myanmar is no longer safe.”  — AFP

These were the details of the news ‘Can’t stay quiet’: Thailand’s Myanmar migrants rise up against coup back home for this day. We hope that we have succeeded by giving you the full details and information. To follow all our news, you can subscribe to the alerts system or to one of our different systems to provide you with all that is new.