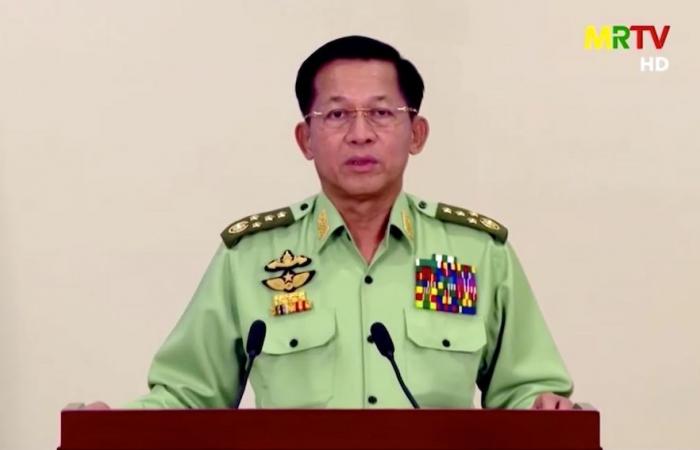 YANGON, Feb 8 — Myanmar’s military leader said today his junta would hold a new election and hand power to the winner as tens of thousands of people took to the streets for a third day to protest against the coup that overthrew Aung San Suu Kyi’s civilian government.

Senior General Min Aung Hlaing was speaking in a televised address, his first to the country since last Monday’s military takeover. He did not say when the election would be held, but repeated claims that last November’s poll, won by Suu Kyi’s National League for Democracy, had been fraudulent.

In the capital Naypyitaw, crowds of protesters chanted anti-coup slogans and told police they should serve the people not the military, according to media and a live feed of events.

Police turned water cannon on protesters and warned that they might use live fire if the demonstrators did not disperse, but the protests ended without bloodshed.

Demonstrations also took place in the commercial capital Yangon and elsewhere. Gatherings have so far been largely peaceful, unlike bloody crackdowns on previous protests, in 1988 and 2007 in particular when hundreds were killed.

The US Embassy said it had received reports that a curfew had been imposed in Yangon and Mandalay, the second-biggest city, from 8 p.m. to 4 a.m. local time.

The generals had already tried to justify their takeover on the grounds of election fraud - rejected by the election committee - and had promised a new poll.

Min Aung Hlaing reiterated that position in his address today, saying the junta would form a “true and disciplined democracy” different to previous eras of military rule.

The election committee must be reformed, he said. He accused it of using the coronavirus pandemic as an excuse to prevent fair campaigning.

“We will have a multiparty election and we will hand the power to the one who wins in that election, according to the rules of democracy,” he said.

He gave no time frame but the junta has said a state of emergency will last one year.

Upping the stakes in the crisis, state media had earlier signalled possible action against protesters.

“We, the whole people who value justice, freedom, equality, peace and safety, not only refuse to accept the lawless wrongdoers but also request that they be prevented and removed through cooperation,” the MRTV television station said in a comment that was later read out on a military-owned network.

Calls to join protests and to back a campaign of civil disobedience have grown louder and more organised since the coup, which drew widespread international condemnation.

“Our message to the public is that we aim to completely abolish this military regime and we have to fight for our destiny,” Aye Misan, a nurse at a government hospital said at a protest in Yangon.

Thousands also marched also in the southeastern city of Dawei and in the Kachin state capital in the far north, the massive crowds reflecting a rejection of military rule by diverse ethnic groups.

In Yangon, a group of saffron-robed monks marched in the vanguard of protests with workers and students, flying multicoloured Buddhist flags alongside red banners in the League’s colour.

The protests are the biggest since the “Saffron Revolution” led by monks in 2007, which led over subsequent years to the military’s gradual withdrawal from politics after decades of direct rule.

Some government workers have joined doctors and teachers in rallying to the call for civil disobedience and strikes.

“We request government staff from all departments not to attend work from Monday,” said activist Min Ko Naing, a veteran of the 1988 demonstrations that brought Suu Kyi to prominence.

Suu Kyi won the Nobel Peace Prize in 1991 for campaigning for democracy and spent nearly 15 years under house as she struggled to end almost half a century of army rule.

Suu Kyi faces charges of illegally importing six walkie-talkies and is being held in police detention until Feb. 15. Her lawyer said he has not been allowed to see her.

The daughter of the former British colony’s independence hero Aung San, Suu Kyi remains hugely popular at home despite damage to her international reputation over the plight of the Muslim Rohingya minority.

While Western governments have condemned the coup, there has been little in the way of concrete action to press the generals.

The UN Security Council has called for the release of Suu Kyi and other detainees and the United States is considering targeted sanctions. Britain and the European Union requested a special session of the UN Human Rights Council be held to address the crisis.

In a letter today, a senior NLD member asked UN Secretary-General Antonio Guterres to “use all available means...to ensure a swift reversal of the coup”.

A UN spokesman confirmed receipt of the letter. Guterres last week pledged to mobilize international pressure on the military to make sure the coup failed. — Reuters

These were the details of the news Myanmar general repeats pledge of new election as thousands join protests against coup for this day. We hope that we have succeeded by giving you the full details and information. To follow all our news, you can subscribe to the alerts system or to one of our different systems to provide you with all that is new.