In thrice-demolished village, a Mideast battle of wills 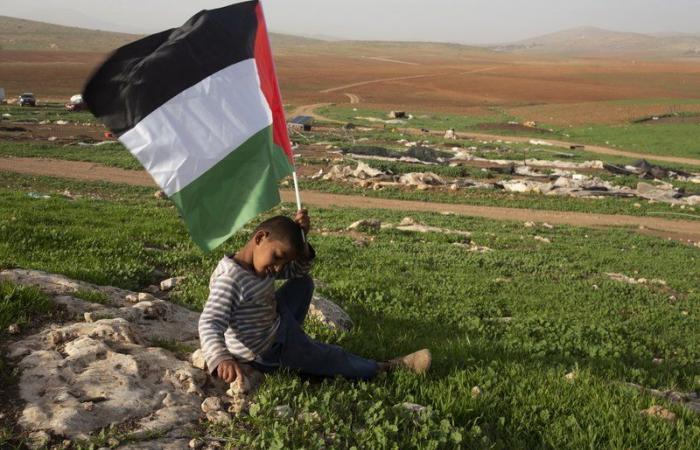 You are now following the details of the In thrice-demolished village, a Mideast battle of wills news and now we leave you with the details

Mohamed Nass - Cairo - KHIRBET HUMSU, West Bank (AP) — It looks like the aftermath of a tornado.

There are dirt plots where there used to be makeshift homes; tent poles stacked like firewood; fencing and scrap metal scattered across a desert valley greened by winter rain; a cold firepit and a pile of kitchen essentials where a cooking tent once stood.

This is what remains of the herding community of Khirbet Humsu in the occupied West Bank, after Israeli forces demolished it for the third time in as many months. On Wednesday, just minutes after the army left, Palestinian residents were at work repairing their fences — hoping to gather their sheep before dark, knowing the army might return the next day.

“We build it up and they tear it down,” said Waleed Abu al-Kbash as he stretched fencing between two posts. “Where am I supposed to go? I have a thousand head of sheep.”

Israel captured the West Bank in the 1967 war, and the Palestinians want it to form the main part of their future state. Khirbet Humsu, perched on the rolling highlands above the Jordan Valley, is part of the 60 percent of the West Bank known as Area C, which is under full Israeli military control as part of interim peace agreements from the 1990s.

Israel planned to annex the Jordan Valley and other parts of the occupied West Bank last year after getting a green light from the Trump administration, but it put annexation on hold as part of a US-brokered normalization agreement with the United Arab Emirates.

It still maintains complete control over the territory, leaving Bedouin communities like the one at Khirbet Humsu at constant risk of displacement. Shepherds who rely on seasonal rains and scattered springs are also at the mercy of an arbitrary cycle of demolition and rebuilding.

The first time Israel demolished Khirbet Humsu was in early November, as world attention was focused on the US election.

B’Tselem, an Israeli human rights group, said Israeli forces demolished 18 tents and other structures that housed 74 people, including many children. They also demolished livestock pens, storage sheds, cooking tents, solar panels, water containers and feeding troughs, and confiscated 30 tons of livestock feed, a vehicle and two tractors. The U.N. said it was the single largest demolition of its kind in the past decade.

Israeli forces returned on Monday and again on Wednesday, using bulldozers and heavy equipment to demolish structures that had been rebuilt and carting away others on large trucks. Most of the families have stayed in the area through each demolition, quickly setting up tents with the help of activists and aid workers after the soldiers leave.

Israel said in November that the structures were built without permission, which the Palestinians and rights groups say is almost never granted. Just a few kilometers (miles) away on either side are two large Jewish farming settlements, with rows of greenhouses, animal enclosures and irrigated fields.

COGAT, the Israeli military body that oversees civilian affairs in the West Bank, said it informed residents of Khirbet Humsu that the area is in a military firing range and reached an agreement with them to move the community to another area. It said residents voluntarily dismantled structures on Monday but then refused to move, leading the military to confiscate them.

Residents who spoke to The Associated Press seemed unaware of any agreement with the military.

Amit Gilutz, a spokesman for B’Tselem, said that even if there were an agreement, it would have been made under duress as Israel controls the area and can demolish at will. Either way, he says it amounts to forcible transfer, a war crime under international law.

Gilutz said the displacement was a test for the new US administration. President Joe Biden has vowed to adopt a more even-handed approach to the conflict and hopes to revive peace talks. Gilutz said Israel would view the administration’s silence as a “green light.”

“This is not an isolated case,” he said, referring to other Bedouin communities across the West Bank where residents are unable to build and have little if any access to electricity or water because of Israeli restrictions.

“For the most part, Israel avoids actually loading people up on trucks and dumping them elsewhere,” he said. “Rather, what it does is it makes life impossible for these people so that they leave, as if by their own choice.”

The displacement has broader implications. Area C encompasses most of the agricultural land in the West Bank, including the Jordan Valley, which the Palestinians say they would need to develop a viable, independent state. Rights groups say that by consolidating its grip on the land — with or without formal annexation — Israel puts a two-state solution even further out of reach.

Israeli leaders have long argued that the keeping the Jordan Valley is essential for protecting Israel’s narrow coastal heartland.

Nidal Abu al-Kbash, another member of the extended family in Khirbet Humsu, believes the military wants to clear them away so it can build settlements and training bases on the land, which is fertile and has a freshwater spring. He too was at work Wednesday repairing fences.

“We have no alternative, he said. ”We’re not leaving.”

Image; A Palestinian Bedouin boy holds a Palestinian flag after Israeli troops demolished tents and other structures of the Khirbet Humsu hamlet in the Jordan Valley in the West Bank, Wednesday, Feb. 3, 2021. A battle of wills is underway in the occupied West Bank, where Israel has demolished the herding community of Khirbet Humsu three times in as many months, displacing dozens of Palestinians. Each time they have returned and tried to rebuild, saying they have nowhere else to go. (AP Photo/Maya Alleruzzo)

These were the details of the news In thrice-demolished village, a Mideast battle of wills for this day. We hope that we have succeeded by giving you the full details and information. To follow all our news, you can subscribe to the alerts system or to one of our different systems to provide you with all that is new.