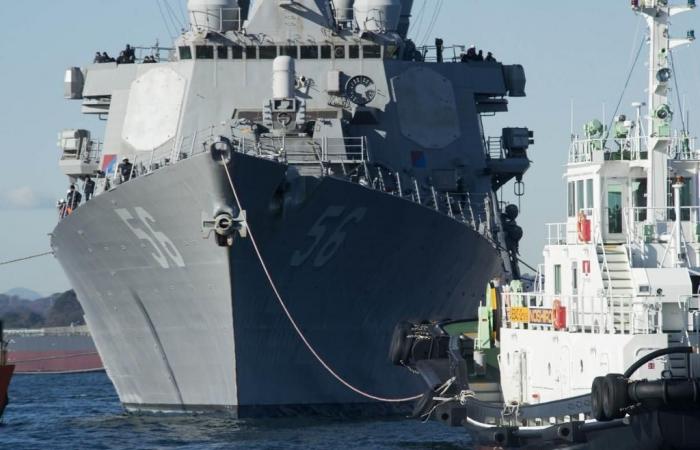 Jeddah - Yasmine El Tohamy - TAIPEI: A US warship sailed through the Taiwan Strait on Thursday, the American navy said, in the first such voyage since the inauguration of President Joe Biden.
The Arleigh Burke-class guided missile destroyer conducted a routine transit through the waterway separating the Chinese mainland and Taiwan, the US Seventh Fleet said in a statement.
US warships periodically conduct navigation exercises in the strait, often triggering angry responses from China which claims self-ruled, democratic Taiwan as part of its territory.
Beijing views any ships passing through the strait as essentially a breach of its sovereignty – while the US and many other nations view the route as international waters open to all.
The voyage by the USS John S. McCain “demonstrates the US commitment to a free and open Indo-Pacific,” the Seventh Fleet statement said.
“The United States military will continue to fly, sail and operate anywhere international law allows.”
Taiwan’s defense ministry confirmed the journey without identifying the vessel.
The transit comes after two US reconnaissance planes and one jet tanker flew near Taiwan’s airspace on Monday, according to the ministry, which did not disclose their routes.
China has stepped up military, diplomatic and economic pressure on Taiwan since the election of President Tsai Ing-wen in 2016, as she refuses to acknowledge Beijing’s stance that the island is part of “one China.”
Last year Chinese military jets made a record 380 incursions into Taiwan’s defense zone, with some analysts warning that tensions between the two sides were at their highest since the mid-1990s.

These were the details of the news First US warship transits Taiwan Strait since Biden inauguration for this day. We hope that we have succeeded by giving you the full details and information. To follow all our news, you can subscribe to the alerts system or to one of our different systems to provide you with all that is new.