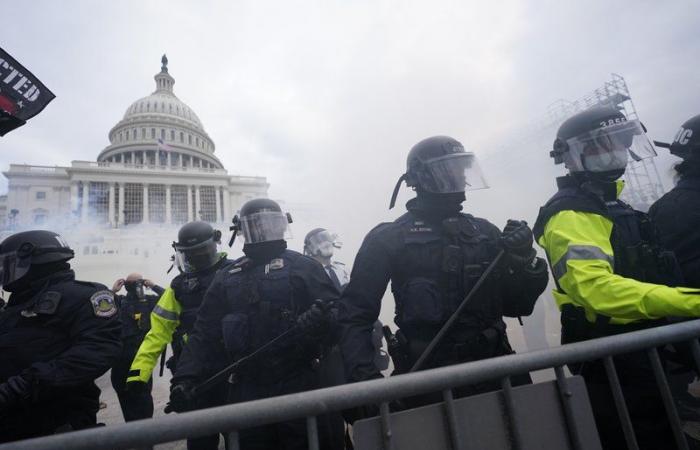 Mohamed Nass - Cairo - CHICAGO (AP) — As federal officials grapple with how to confront the national security threat from domestic extremists after the deadly siege of the US Capitol, civil rights groups and communities of color are watching warily for any moves to expand law enforcement power or authority.

They say their communities have felt the brunt of security scrutiny over the last two decades and fear new tools meant to target right-wing extremism or white nationalists risk harming Muslims, Black Americans and other groups, even if unintentionally.

Their position underscores the complexity of the national debate surrounding how to balance First Amendment expression protections with law enforcement’s need to prevent extremist violence before it occurs. In particular, many Muslim advocates oppose the creation of any new domestic terror statute modeled after existing laws that criminalize support for foreign terror organizations.

“The answer ought to be to sort of pause. Because the instinct to do something is something I’m really quite afraid of,” said Maya Berry, executive director of the Arab American Institute, one of more than 130 civil and human rights organizations that say the FBI already has the tools it needs.

“There’s an entire federal code in place that allows you to successfully go after this violence before you need to sort of say, ‘Oh, wait, you know, there’s this existing gap and we need more power,’” she added.

The debate over how to prevent extremist violence, and whether new domestic terrorism laws are required, has surfaced before, including after rampages that targeted Jews in a Pittsburgh synagogue and Latinos in a Texas Walmart.

The Jan. 6 attack, when an overwhelmingly white mob of Donald Trump supporters and members of far-right groups violently breached the Capitol, has refocused attention on white extremism and prompted questions about whether a racial double standard exists in investigating and countering violence.

President Joe Biden moved swiftly to declare domestic extremism an urgent national security concern, tasking the Office of the Director of National Intelligence to create a threat assessment. The Department of Homeland Security issued a terrorism bulletin warning of the prospect of additional violence. Even before the riot, FBI Director Chris Wray said domestic extremism was responsible for the deadliest violence over the last year and had been elevated as a priority to the same level as international terrorism.

The debate now is how to address the rise of white supremacist violence while not targeting the same people white supremacists seek to harm. Not only that, law enforcement officials pressured to crack down more on domestic extremists have to do so while staying mindful of broad First Amendment protections that prevent the arrests of people for abhorrent or hateful speech short of threatening violence.

“White violence is consistently perpetuated and then used as justification for increased surveillance or increased state power against communities of color,” said 26-year-old Iranian American activist Hoda Katebi, who is Muslim, wears a headscarf and grew up defending herself against harassment and being called a terrorist in the years after Sept. 11, 2001.

The Justice Department has not said publicly if it intends to seek any additional powers, or whether it even needs new ones to deal with domestic extremism. Though there is no federal law that explicitly charges crimes as domestic terrorism, prosecutors have successfully used other statutes to cover conduct that might reasonably be seen as terrorism, including at the Capitol.

There are, however, additional legal tools available for countering international terrorism. Federal law makes it a crime to give support to designated foreign terror groups, giving law enforcement greater flexibility to arrest people who donate money or otherwise aid such an organization, even if they haven’t harmed anyone or threatened violence themselves.

The current concern from civil rights groups stems from the way communities of color, notably Black Americans and Muslims, have been affected over the decades by law enforcement scrutiny, though the FBI has significantly tightened its policies in ways that require a credible basis for suspicion to launch an investigation or apply for surveillance of a particular individual.

In a statement, the FBI said it has a dual, but not contradictory, mission of protecting the American people and upholding the Constitution and that it will defer to Congress to work with the Justice Department on assessing whether any additional authorities are needed. It says it will continue to use all the tools it has.

“The FBI investigates and responds to incidents only when an individual’s activity crosses the line from ideas and constitutionally protected activity to violence,” the statement said.

Still, in the early years of the bureau’s history, it targeted “movements that sought to liberate Black people from the continued oppression that they suffered post-slavery and post-Reconstruction,” said Janai Nelson, NAACP Legal Defense Fund associate director-counsel.

FBI surveillance of civil rights leaders and infiltration of Black organizations continued into the 1950s and 1960s, most infamously through the COINTELPRO program created to disrupt activities of the Communist Party. Martin Luther King Jr. was monitored by the FBI beginning in 1955 during his involvement with the Montgomery bus boycott.

In the last decade, as protests swept the US after the police killings of Black people, Black Lives Matter grew in prominence as a slogan and an organization. The FBI at one point created a domestic threat category called “Black Identity Extremists,” though Wray has said the bureau no longer uses the term.

“Surveillance tactics and the eye of our law enforcement have always been trained on communities of color. Particularly Black communities,” Nelson said.

Muslim Americans believe they’ve felt particular scrutiny since 9/11, including after the Patriot Act, legislation that afforded law enforcement new counterterrorism authority, as well as less intrusive initiatives like the Obama-era program designed to counter violent extremism across different movements. Counterterrorism experts defend the Patriot Act and similar investigative tools, including sting operations, as having prevented an untold number of attacks. Yet many Muslims still regard those actions as having unfairly infringed upon the privacy of many Americans.

All the while, the threat of white nationalism continued to grow inside the US, prompting debate over a perceived double standard when it comes to the terrorism label, and tough questions for law enforcement about whether it has been sufficiently attuned to a domestic extremism surge that has been recently responsible for greater casualties in the US than international terrorism.

Mindful of the complexity of the debate, one legislative proposal would create not additional law enforcement tools or even a new definition of domestic terrorism, but simply mandate that the FBI and Department of Homeland Security make periodic reports to Congress about the extremist threat.

“Anytime you shine a light on an issue, on an action, you get more accountability and better outcomes,” said Rep. Brad Schneider, an Illinois Democrat and a co-sponsor of the measure.

By NOREEN NASIR and ERIC TUCKER

Nasir reported from Chicago and Tucker from Washington.

Image; FILE – In this Jan. 6, 2021, file photo, police stand guard after holding off Trump supporters who tried to break through a police barrier at the Capitol in Washington. As federal officials grapple with how to confront the national security threat from domestic extremists after the deadly siege of the US Capitol, civil rights groups and communities of color are watching warily for any moves to expand law enforcement power or authority. (AP Photo/Julio Cortez, File)

These were the details of the news Activists wary of broader law enforcement after Capitol riot for this day. We hope that we have succeeded by giving you the full details and information. To follow all our news, you can subscribe to the alerts system or to one of our different systems to provide you with all that is new.