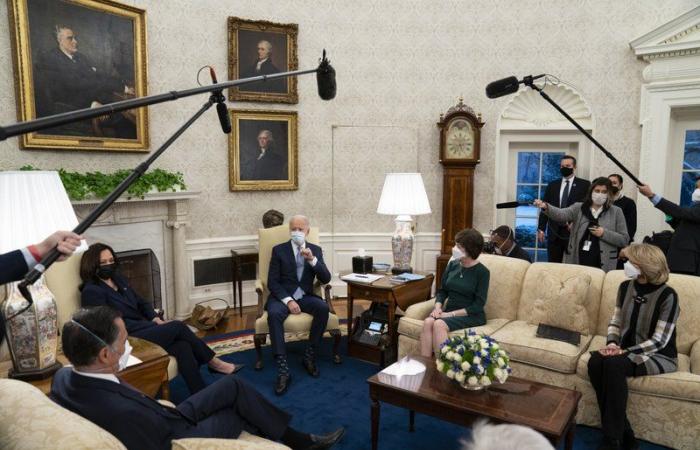 You are now following the details of the Biden, Yellen say GOP virus aid too small, Democrats push on news and now we leave you with the details

Mohamed Nass - Cairo - WASHINGTON (AP) — President Joe Biden panned a Republican alternative to his $1.9 trillion COVID rescue plan as insufficient as Senate Democrats pushed ahead, voting to launch a process that could approve his sweeping rescue package on their own, if Republicans refuse to support it.

Biden and Treasury Secretary Janet Yellen joined the Democratic senators for a private virtual meeting Tuesday, both declaring the Republicans’ $618 billion offer was too small. They urged big fast action to stem the pandemic crisis and economic fallout.

As the White House reaches for a bipartisan bill, Democrats marshaled their ever-slim Senate majority, voting 50-49, to start a lengthy process for approving Biden’s bill with or without GOP support. The goal is to have COVID-19 relief approved by March, when extra unemployment assistance and other pandemic aid expires.

“President Biden spoke about the need for Congress to respond boldly and quickly,” Senate Majority Leader Chuck Schumer said after the lunch meeting.

“If we did a package that small, we’d be mired in the COVID crisis for years.”

The swift action from Democrats on Capitol Hill underscores the urgency of delivering Biden’s top legislative priority even as talks are progressing privately between Republicans and the White House, as well as with centrist Democrats, on potential changes to the package to win over broader bipartisan support.

Biden framed his views during the virtual lunch meeting with Democrats by talking about the need not to forget working and middle-class families — even those like nurses and pipefitters making $150,000 for a family of four — who are straining during the crisis, according to a person granted anonymity to discuss the private call.

The night before, Biden met with 10 Republican senators pitching their $618 billion alternative, and let them know it was insufficient to meet the country’s needs. The president made it clear that he won’t delay aid in hopes of winning GOP support.

While no compromise was reached during the late Monday session, White House talks with Republicans are privately underway.

The outcome will test the new president striving to unify the country but confronting a rising COVID-19 death toll and stubbornly high jobless numbers, with political risks for all sides. Vaccine distributions, direct $1,400 payments to households, school reopenings and business aid are all on the line.

Senate Republican leader Mitch McConnell criticized the Democrats for pressing ahead on their own. He said he had spoken to Biden ahead of his meeting with the 10 GOP senators.

The two sides are far apart, with the Republican group of 10 senators focused primarily on the health care crisis and smaller $1,000 direct aid to Americans than the $1,400 payments Biden proposed, while the president is leading Democrats toward a more sweeping rescue plan to shore up households, local governments and a partly shuttered economy.

At the White House, press secretary Jen Psaki reiterated Biden’s view that the risk is not in crafting too large a package, but in providing too little aid. She said the president was hopeful GOP ideas will be brought forward, and said nothing precludes Republicans from participating in the process.

“We need to make sure people get the relief they need,” she said.

White House officials have previously cited the U.S. Chamber of Commerce as evidence of broad support for their plan, but the nation’s most prominent business group issued a letter Tuesday that urged a bipartisan compromise.

“There ought to be common ground for a bipartisan proposal that can become law,” Neil Bradley, executive vice president and chief policy officer, said in an interview.

The cornerstone of the GOP plan is $160 billion for the health care response — vaccine distribution, a “massive expansion” of testing, protective gear and funds for rural hospitals, similar to what Biden has proposed.

But from there, the two plans drastically diverge. Biden proposes $170 billion for schools, compared to $20 billion in the Republican plan. Republicans also would give nothing to states, money that Democrats argue is just as important, with $350 billion in Biden’s plan to keep police, fire and other workers on the job.

The Republicans offer $40 billion for Paycheck Protection Program business aid. But gone are Democratic priorities such as a gradual lifting of the federal minimum wage to $15 an hour.

According to Schumer, Biden told Democratic senators he had let the Republicans know “he’s willing to make some modifications.”

But both Biden and Yellen recalled the lessons of the government response to the 2009 financial crisis, which some have since said was inadequate as conditions worsened. Biden said he told the Republicans their offer was “way too small,” Schumer said.

Winning the support of 10 Republicans would be significant, potentially giving Biden the votes needed in the 50-50 Senate to the 60-vote threshold typically required to advance legislation. Vice President Kamala Harris is the tie-breaker.

Wary Democrats pushed ahead with Tuesday’s vote, unwilling to take too much time in courting GOP support that may not materialize or may lead to too meager a package.

The procedural steps are groundwork for eventual approval under the budget reconciliation process that would allow the bill to pass with a 51-vote majority in the Senate, rather than the 60 votes typically needed.

The vote Tuesday opens 50 hours of debate on a budget resolution, with amendment votes expected later this week. The House is poised to launch a similar process.

By LISA MASCARO and JOSH BOAK

These were the details of the news Biden, Yellen say GOP virus aid too small, Democrats push on for this day. We hope that we have succeeded by giving you the full details and information. To follow all our news, you can subscribe to the alerts system or to one of our different systems to provide you with all that is new.