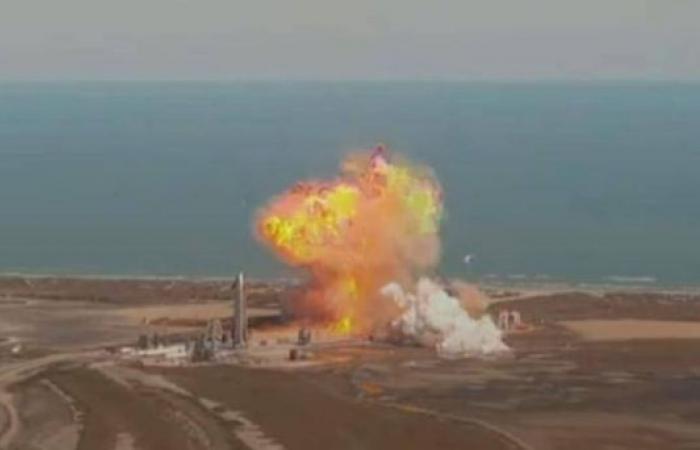 We show you our most important and recent visitors news details SpaceX Mars rocket prototype explodes on landing, again in the following article

Hind Al Soulia - Riyadh - AUSTIN, Texas — Starship SN9, SpaceX's early prototype for a rocket the company hopes will carry the first humans to Mars, launched a high-altitude test flight on Tuesday that saw the vehicle travel a few miles up in the air, hover for a moment, and then conduct a belly flop-like maneuver on the descent before making an explosive landing back on the launch pad.

The rocket's three engines ignited, turned off, and then re-ignited for the landing as planned, however, the rocket burst into a fireball when it returned to the launch pad. It was not immediately clear what went wrong.

The test launch comes after the 160-foot tall rocket prototype had been stranded on its launchpad in Texas over the weekend. It was poised to take off for the test launch last week, but it stayed grounded because SpaceX violated a public safety agreement it had with federal regulators during a previous test launch, according to the Federal Aviation Administration.

Last Thursday, With Starship SN9, fueled and able to launch at any momen, the FAA sent out a surprising advisory that said the launch had been scrubbed.

The FAA, which oversees US airspace as well as licenses rocket launches, ordered SpaceX to halt operations at its testing facilities in South Texas "that could affect public safety," the agency said. After previously declining to comment on its investigation, which was first reported by The Verge, the FAA said Tuesday that it concluded this week that SpaceX took "corrective action" and is now complying with public safety rules. The agency did not disclose the nature of the public safety issue or what corrective action was undertaken.

The FAA reinstated SpaceX's authorization to launch its rocket prototypes late Monday, according to a statement from the agency.

These were the details of the news SpaceX Mars rocket prototype explodes on landing, again for this day. We hope that we have succeeded by giving you the full details and information. To follow all our news, you can subscribe to the alerts system or to one of our different systems to provide you with all that is new.