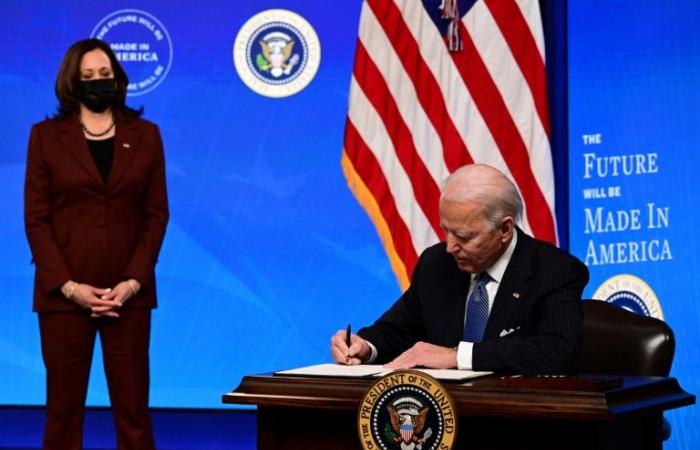 Joe Biden signed an executive order on Monday to urge the federal government to buy more goods and services from US companies, at the risk of upsetting some trading partners like Canada.

“We can create more jobs” in the manufacturing industry, assured Joe Biden at a press conference. “I do not accept the idea that the vitality of the US manufacturing sector is a thing of the past,” he added.

Existing law, the Buy American Act of 1933, already requires the government to contract with American companies when possible, but there are many exceptions and waiver opportunities, which many small and small have long denounced. medium-sized enterprises.

Certain products are thus stamped “Made in USA” although a major part of their components come from foreign countries.

The federal government spends approximately $ 600 billion annually on the security of the country. “”We have to make sure that this money goes to American companies,” said Joe Biden.

The new host of the White House thus takes up a theme dear to his predecessor Donald Trump.

However, the new provisions could irritate allies and strategic partners of the United States, such as Canada and European countries, who already felt that the “Buy America” provisions prevented their companies from having access to certain tenders. from the US government.

Joe Biden further points out that after four years of Donald Trump’s protectionist trade policy, it is not time for all-out liberalization.

The Canadian Foreign Minister has already warned Washington against “Buy American“”, according to local media.

“”It is obvious that if we find that the + Buy American + policy is detrimental to our business, we will let it be known,” Marc Garneau said on CBC while stressing that “President Biden has indicated that he is open to us. hear whenever we have concerns “.

Canadian Deputy Prime Minister Chrystia Freeland acknowledged that “the devil often lurks in the details” while stressing that the job of the Canadian government would be to work for a balanced, “win-win” bilateral trade relationship.

For his part, Joe Biden explained that the United States is committed to working with its trading partners “to modernize the rules of international trade, including those related to public procurement” so that taxpayers’ money stimulates investments that promote growth and “resilient supply chains”.

Supporting the American industry is not a surprise, it was even an election promise of Joe Biden which must seduce the base electorate of his predecessor.

Less than a week after his inauguration, Joe Biden thus unfolds his priorities even before his government team is in place.

While Lloyd Austin, the Minister of Defense, was confirmed by the Senate on Friday, key ministries, such as Foreign Affairs, are still awaiting their officials.

Janet Yellen, she was confirmed Monday as Secretary of the Treasury, by a very large majority. Its mission will be to pilot in particular the rescue plan of 1.900 billion dollars to get the country out of the crisis.

The executive order echoes measures that Donald Trump himself had taken to push the federal state to buy more American products. He then made tariffs a weapon against imports, with mixed results.

Instead of a trade war, Joe Biden favors, him, a hardening of the rules of the “Buy American” and will use the strike force of purchase of the federal government.

However, companies have already warned that overly restrictive rules could cause costs to skyrocket, making it difficult to buy parts made outside the United States.

But the government highlights the shortages caused by Covid-19, which have shown the weaknesses of the system, and explains wanting to avoid being “put in a position where we depend on countries that do not share our interests to deliver materials essential “.

A veiled way of attacking China whose products are flooding the world.

These were the details of the news Biden wants to encourage purchases of American products, like Trump for this day. We hope that we have succeeded by giving you the full details and information. To follow all our news, you can subscribe to the alerts system or to one of our different systems to provide you with all that is new.