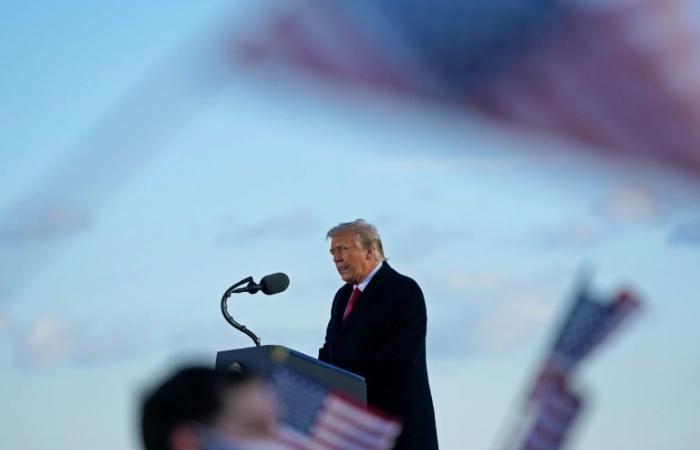 Democrats deliver the indictment of Donald Trump to the US Senate on Monday evening, ringing the formal opening of the historic impeachment trial for “inciting insurgency” of the former president, still strong in the support of some senators republicans.

After this solemn ceremony, the impeachment trial, a first for a former US president, will not start until February 9.

Behind this deadline, on which Republicans and Democrats have agreed: the desire to give the Republican billionaire more time to prepare his defense. But also to Joe Biden to start his presidency, seeing more members of his cabinet confirmed by the Senate and, he hopes for the first major bills adopted.

In the meantime, the new president is increasing the number of decrees to try to restore the world’s largest economy and fight against the epidemic.

After a weekend of silence contrasting greatly with the tweets that punctuated Donald Trump’s weekends, the Democrat will sign a new decree on Monday afternoon strengthening the “Made in America“”.

With his indictment for “inciting insurgency” passed in the House of Representatives on January 13, Donald Trump became the first president of the United States to fall twice under the blow of an “impeachment”.

Around 7:00 p.m. (00:00 GMT Tuesday), the Democratic House “prosecutors” will walk through the long, richly decorated corridors that separate them from the Senate to present the indictment of the 45th President of the United States.

Then they will read it in front of the senators.

Donald Trump is accused of having incited his supporters to launch an assault on the seat of Congress on January 6, while parliamentarians certified the victory of his rival Joe Biden in the presidential election.

“You will never take back our country by being weak. You must show strength and you must be strong,” he told protesters shortly before the attack on Capitol Hill, which left five dead.

These scenes of violence have upset America, and pushed several big names in the Republic to denounce the behavior of the stormy billionaire.

But a Senate conviction appears unlikely at this stage, with the real estate mogul, still very popular with his constituents, still counting on key supporters in the upper house.

Before the ceremony, the Senate must approve Monday afternoon the appointment of Janet Yellen as Minister of Economy and Finance.

The confirmation vote of the future head of American diplomacy Antony Blinken could intervene Tuesday.

Drawing a grim picture of the health and economic crises hitting the United States, Joe Biden proposed a titanic plan to revive the economy and fight the pandemic of 1.9 trillion dollars.

But its adoption in Congress seems for the moment compromised by the strong opposition of Republicans, but also the reluctance of moderate Democrats.

Democrats have certainly taken control of the Senate in addition to the House. But their majority is extremely fragile: they occupy 50 seats in senators, against 50 for Republicans. In the event of a perfect tie in a vote, Vice President Kamala Harris has the power to add her voice to tip the scales on the Democratic side.

But they will need 60 votes to put the major reforms to a vote. And two-thirds of the Senate to condemn Donald Trump.

A goal that seems difficult to achieve, even if their influential leader Mitch McConnell did not rule out voting for his conviction.

The country is already in flames and it is like pouring gasoline on this fire.”

Others even hope to block the holding of the trial altogether, by declaring it unconstitutional to try a former president.

A great critic of Donald Trump, Senator Mitt Romney is one of the few Republican voices to support the procedure, without however commenting on the meaning of his vote.

This ex-presidential candidate was the only Republican to condemn the real estate mogul during his first impeachment trial, in February 2020 in the Ukrainian case.

The president was then acquitted.

Among Democrats, however, the votes are almost unanimous. “He must be faced with his responsibilities.

The future of this country is at stake,” said the head of the House Judiciary Committee Jerry Nadler on Monday.

Beyond Congress, the judicial future of the ex-president remains threatening, with multiple lawsuits initiated across the country.

But the Supreme Court lightened its horizon Monday by ordering to close those relating to the income of foreign origin drawn from its large hotels.

These were the details of the news Trump indictment awaited in Senate, Republicans divided for this day. We hope that we have succeeded by giving you the full details and information. To follow all our news, you can subscribe to the alerts system or to one of our different systems to provide you with all that is new.