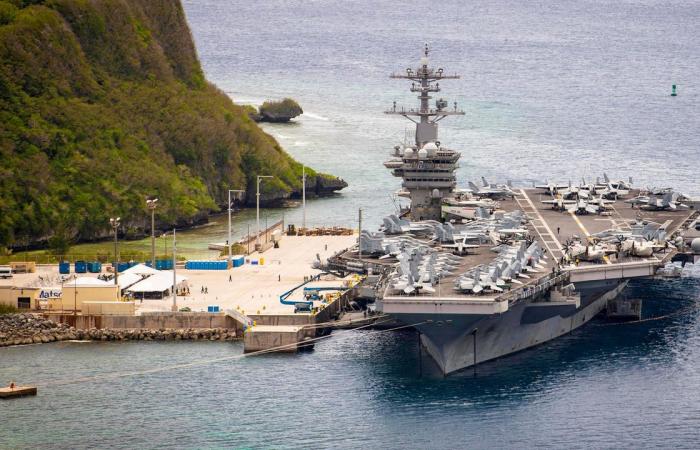 A group of US aircraft carriers sailed the South China Sea as part of a so-called “freedom of navigation” exercise, the first routine operation in the region under the leadership of new President Joe Biden.

“It’s great to be back in the South China Sea again, to conduct routine operations, to promote the freedom of the seas and to reassure allies and partners,” said Rear Admiral Doug Verissimo, commander of the Carrier Strike Group 9.

Beijing claims almost all of the South China Sea – although Taiwan, the Philippines, Brunei, Malaysia and Vietnam also say parts are theirs.

The spokesman for the Chinese Foreign Ministry described the routine American exercises as “a show of force and not conducive to peace and stability in the region”.

The South China Sea is a strategic waterway and it is also believed to have valuable oil and gas deposits.

Beijing has moved aggressively to turn the reefs into man-made islands capable of accommodating military planes, angering nations who are also making claims in the region.

The US operation comes days after Washington said its engagement in Taiwan was “rock solid,” the Biden administration’s initial comments on Democratic Island.

Taiwan separated from China at the end of a civil war in 1949 and exists under the constant threat of invasion by the mainland, whose rulers have vowed to take it one day.

Beijing is reluctant to make any official contact with Taiwan and tries to keep the island diplomatically isolated.

However, the United States remains Taiwan’s most important unofficial ally and is bound by an act of Congress to sell it weapons in defense.

President Donald Trump embraced warmer ties with the island as he feuded with China over trade, and his successor is expected to stay tough on Beijing as well.

These were the details of the news U.S. warships conduct exercises in the South China Sea for this day. We hope that we have succeeded by giving you the full details and information. To follow all our news, you can subscribe to the alerts system or to one of our different systems to provide you with all that is new.