Earthquakes more numerous than average in Switzerland in 2020 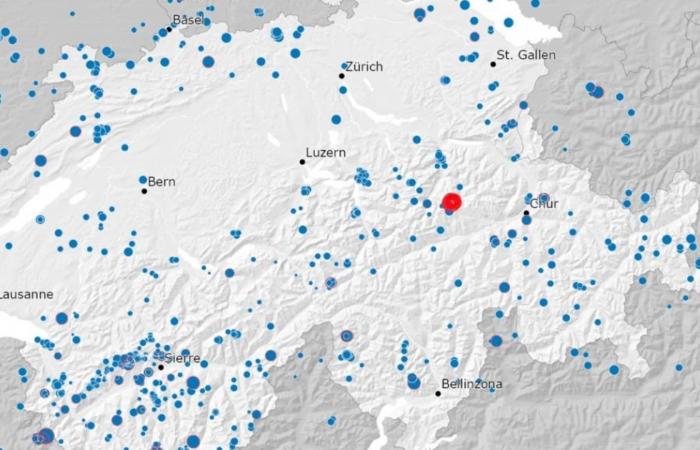 In 2020, the earth trembled 1,400 times in Switzerland and the neighboring regions, a number slightly higher than normal, the Swiss Seismological Service communicated on Monday. One hundred and six were felt by the population.

With a magnitude of 4.3, the strongest earthquake occurred on October 25 near Elm, in the Glarus region, said Monday the Swiss Seismological Service at the Polytechnic School of Zurich (ETHZ). It was partly felt as far as Ticino and Lake Constance and was followed by more than 250 aftershocks, some of which reached a magnitude of 3.9 on the Richter scale.

An earthquake with a magnitude of 3.1 had already occurred in the same fault system on May 26. It had been followed by dozens of aftershocks.

In total, the Glarus seismic sequence has caused more than 350 earthquakes and “contributes significantly to the number of earthquakes above the average observed in 2020”, according to the press release. No significant damage was recorded.

French-speaking Switzerland especially felt the earthquake with a magnitude of 3.8 that occurred near Vallorcine (F), in border Haute-Savoie. Ticino was shaken by earthquakes in Milan (magnitude 3.9), Italy, Bellinzona (TI) (2.9) and south of Arolla (VS) (3.5 ).

The one, with a magnitude of 6.3, which hit Croatia on December 29, moved some high-rise buildings in Switzerland, 600 kilometers from the epicenter, assures the Swiss Seismological Service. Thirty reports have been recorded.

Out of a total of 1,400 earthquakes in Switzerland and the border areas in 2020, 106 were felt by the population. Seven tremors were each reported by more than 100 people. 2019 was also an exceptional year in this area: 1,670 earthquakes were recorded.

The influence of the coronavirus

In addition to seismic waves, stations in Switzerland also measure “background noise”, originating from natural vibrations caused by wind or waves, for example, but also by human activities, such as automobile traffic or construction.

The semi-containment of the spring resulted in “a significant reduction in this background noise”, notes the Swiss Seismological Service.

This period of calm is the longest on record. In mid-June, the noise increased again.

In Switzerland, the last strong earthquake – with a magnitude of 5.8 – took place in Valais on January 25, 1946. It left four victims, many injured and 3,500 buildings damaged.

These were the details of the news Earthquakes more numerous than average in Switzerland in 2020 for this day. We hope that we have succeeded by giving you the full details and information. To follow all our news, you can subscribe to the alerts system or to one of our different systems to provide you with all that is new.