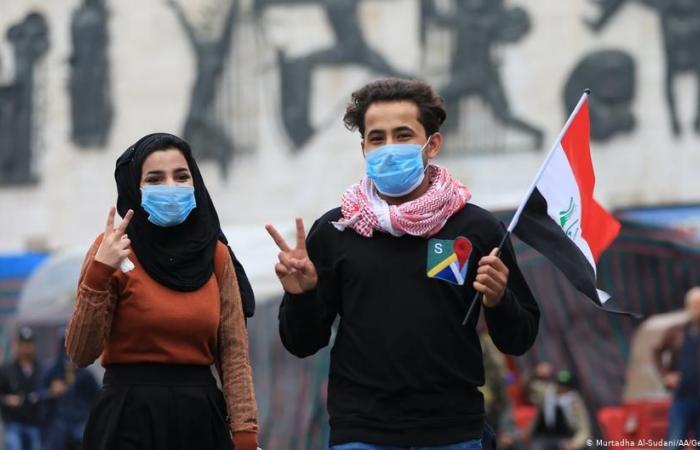 Mohamed Nass - Cairo - Over the past few weeks, Iraq’s anti-government demonstrators have been moving from protest into politics, and analysts say they have the potential to bring meaningful change to Iraq’s flawed political system despite ongoing violence against them.

Election officials told local media that 260 political parties had registered to compete in the upcoming elections and that around 60 of them were new. Iraq’s federal elections were originally planned for June but this week were moved to mid-October to give electoral authorities more time to enroll voters and register candidates.

Although the identities of the new parties have not been revealed, locals believe that many of them will have some connection to existing political networks.

However, there are also some genuinely new parties planning to contest the October 10 ballot. These have been formed by younger Iraqis who took part in anti-government protests that started in October 2019 and that eventually forced the resignation of the sitting prime minister.

Over the past 15 months, these nationwide protests have been dying down. Protesters have been arrested, beaten and killed both by Iraqi security forces and by armed militias who oppose their demands for a new start. Amnesty International estimated that over 600 were killed, with tens of thousands more injured. The COVID-19 pandemic has seen protests dwindle further.

With the protests on the wane, some of those behind them are seeking to further their cause by official political means. One of the best-known of the activists, Alaa Rikabi, who hails from the southern city of Nasiriyah, held a press conference last Friday to announce the founding of a party called Imtidad (English: Extension). Rikabi, a pharmacist, became well-known for helping injured protesters, and after the December 2019 resignation of then-Prime Minister Adel Abdul-Mahdi, many of the protesters thought Rikabi should have that job.

A few days earlier, Baghdad-based activist Tallal al-Hariri started campaigning for his new party, called “October 25” after the day of the largest anti-government protests in 2019.

A third Baghdad-based organization called National Home also exists but does not classify itself as a political party yet. Protesters have told local media that another two parties are likely to be launched this month in Nasiriyah and Baghdad and that overall they expect about 10 parties to come out of the protest movement before the elections.

Compared to the larger, long-established parties in Iraq, these new entrants are small, inexperienced and underfunded. But thanks to a change in Iraq’s electoral rules, they may have a chance.

Ratified in November last year, the new electoral law divides each of Iraq’s 18 provinces into 83 different electoral districts. Whereas in the past, one party could win larger electoral districts — that is, whole provinces — then simply select candidates from their party lists, now the seat in parliament will go to whoever wins the most votes in their more localized district.

The new law was part of the reason for the founding of the October 25 party, activist al-Hariri told DW. “The new law and narrower districting offers a greater opportunity to win a seat,” he explained. “Our candidates — mostly young liberals — won’t have to compete in the traditional way, which has seen the [larger] Islamic parties unchallenged since 2005.”

End of the peaceful revolution

Another reason for the founding of the October 25 party is what al-Hariri describes as the collapse of the peaceful revolution due to attacks on protesters. It is true there is debate among the protesters as to whether they should become part of the system they were fighting. But al-Hariri believes contesting the election is the best way forward. “We want to invest in democracy and lay the foundations for major change from within the system, without losing more lives” he reasoned.

Like most of the new protest groups, his party regards itself as secular and opposed to Iraq’s existing ethno-sectarian political system, set up in 2003 to peacefully share power between the three main populations in Iraq: Sunni Muslims, Shiite Muslims and the Kurds. Al-Hariri and other anti-government protesters have also spoken out against Iranian influence in Iraqi politics.

This has earned them the wrath of armed groups supported by Iran, who are strongly suspected of being behind deadly violence during the protests as well as ongoing harassment of activists.

For example, the launch of the Extension party had to be held in the neighboring province because of all the threats against it back home, members said at the event. Shortly before the launch, a grenade was thrown at one Nasiriyah activist’s house. Elsewhere, well-known activists have suffered everything from online hate campaigns to kidnappings, beatings and assassinations.

The new parties’ candidates have yet to be announced, and there is some concern that violence against them will ramp up once their names are public.

“How do we expect activists to go out there, and campaign with a bull’s-eye on their heads?,” asks Ruba Ali al-Hassani, a Canada-based fellow at the Tahrir Institute for Middle East Policy. “By not providing protections for activists at risk, the government allows campaign suppression.”

Al-Hariri says October 25 party candidates will use social and other media as much as possible, rather than campaigning in person. “We believe that’s the best way for our candidates to avoid direct risks,” he noted.

As Mustafa Habib, a journalist and political analyst based in Baghdad, points out, the protesters are already very adept at using social media after their experiences in utilizing them to organize their demonstrations. “So they could definitely motivate people to vote that way,” he says, referring to the fact that turnout for Iraq’s last federal elections in 2018 was historically low, at 44.5%, and that many Iraqis no longer have much faith in their democratic system.

That may also be why widespread support for the anti-government protests is ongoing. According to a survey by Chatham House on the protests’ anniversary in October last year, 83% of locals thought the demonstrations were totally or partially justified.

So could these new protesters’ parties make a difference? They have great promise but it’s “a David versus Goliath situation,” al-Hassani told DW. “Popular mobilization is necessary to challenge the established parties.”

“They can if they unite,” Habib argued. “Their internal disagreements are the biggest problem right now,” he says, adding that he’s heard that protester parties are currently holding meetings to find some consensus before October.

The new election rules do work in their favor, Habib continues, especially if they agree to field one candidate in each of the different districts and don’t compete against each other. Then, if they win more than 30 seats in Iraq’s 329-seat parliament, they have a genuine chance of making a difference, he suggests. “I am sure the Iraqi people are with them,” Habib concludes. “They just need to have a plan.”

These were the details of the news Iraq’s new protester parties plan to change the country for this day. We hope that we have succeeded by giving you the full details and information. To follow all our news, you can subscribe to the alerts system or to one of our different systems to provide you with all that is new.