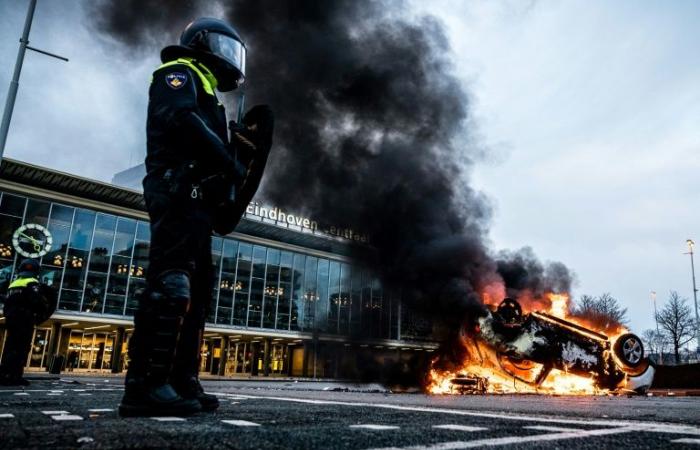 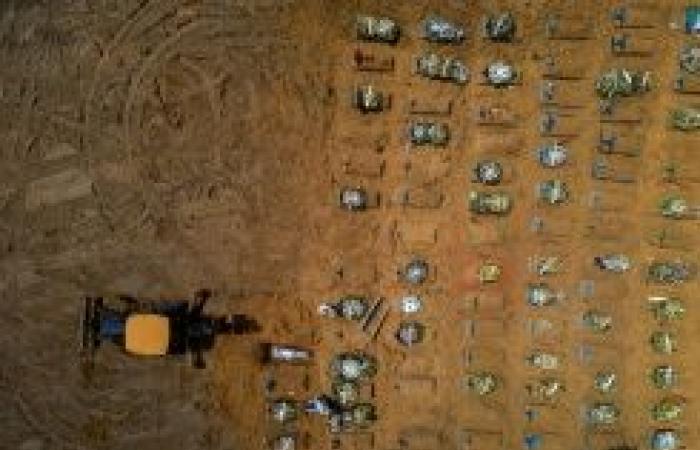 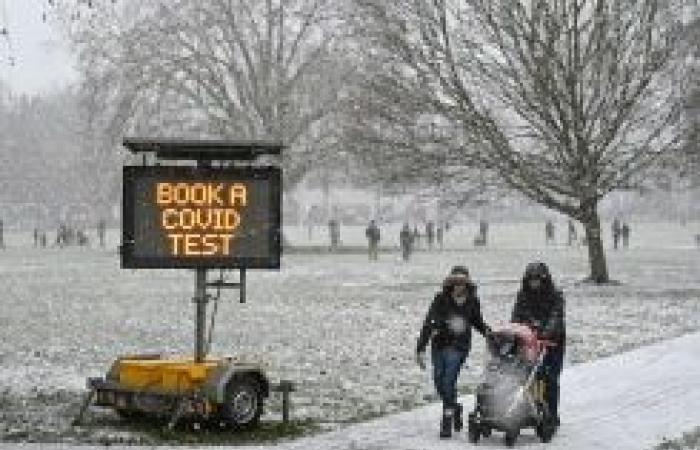 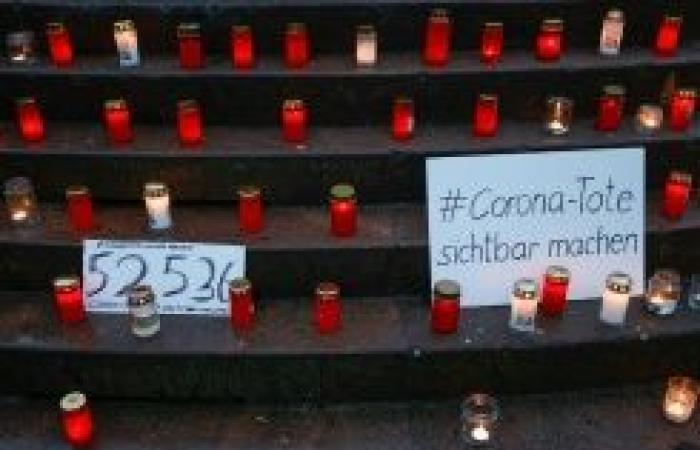 Worried about the spread of new variants of the coronavirus, several countries, such as the United States, France or Israel, have imposed entry restrictions on their territory, a tightening of health measures which is causing protests, especially in the Netherlands where clashes have pitted opponents of the curfew and the police.

President Joe Biden will restore restrictions on entry to the United States on Monday, especially for foreigners who have stayed in Britain and South Africa, where more contagious variants of the coronavirus have appeared.

The ban on entering the United States will apply to most non-American citizens who have visited Britain and much of Europe, as well as Brazil and South Africa, a said a White House official.

The United States officially passed the 25 million Covid-19 case mark on Sunday. More than 419,097 people have succumbed to the virus in the country, the most affected in the world in absolute terms, and whose new president Joe Biden wanted to make the fight against the virus his priority.

The pandemic has killed at least 2,121,070 people worldwide and infected more than 98.6 million people since its onset at the end of 2019, according to an AFP report on Sunday.

Concern about the new variants has led to the tightening of restriction measures in many countries, arousing opposition from a section of the population.

In several towns in the Netherlands, clashes with the police and looting broke out on Sunday during protests against the curfew introduced the day before, and dozens of people were arrested across the country.

The Hague as in Eindhoven, vehicles and businesses were set on fire. On Saturday, a Covid-19 screening center was set on fire in Urk, a village in the north of the country.

In Denmark, police arrested three people suspected of torching a model bearing the image of the Prime Minister during a demonstration on Saturday night in Copenhagen. Thousands of people also demonstrated on Saturday in Madrid, denouncing the “deception” of a virus which, according to some demonstrators, “does not exist”.

– In Manaus, the cemetery is enlarged –

The second most affected country (at least 217,037 dead) after the United States, Brazil is just starting its vaccination campaign. After 10 days of nighttime curfew, the state of Amazonas will institute a one-week lockdown from Monday.

Capital of this state in the northwest of the country, Manaus has already experienced more than 3,000 burials during this disastrous month of January, the deadliest since the start of the pandemic, where the outbreak of contaminations has overwhelmed hospitals. 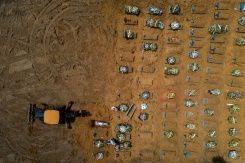 Officially, the virus is responsible for almost half of these deaths and it was necessary to launch extension work in the Nossa Senhora Aparecida cemetery, the largest in the city, to accommodate 2,000 to 3,000 more dead.

In Mexico, where the pandemic has killed more than 146,000, President Andres Manuel Lopez Obrador, 67, announced on Sunday that he had tested positive for Covid-19, but only suffered from “mild symptoms”.

New restrictions are being imposed in many countries to address concern over variants of the coronavirus. 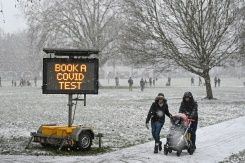 France, already under strict curfew, tightened its border controls on Sunday and presenting a negative PCR test has become mandatory for travelers from the EU.

The measure had already applied since mid-January to travelers from other countries.

But “it will probably be necessary to go towards containment”, to face the variants which “completely change the health situation” in France, said the president of the scientific council Jean-François Delfraissy.

Sweden banned entry to its territory from Norway for three weeks on Sunday after an outbreak of an English variant of the coronavirus appeared near Oslo, while extending the same measure with regard to the United Kingdom and from Denmark.

Norway announced on Saturday semi-containment measures in Oslo and its region, the most stringent since the start of the epidemic. In Austria, wearing the FFP2 mask will become mandatory on Monday in public transport and shops.

Israel, which has already vaccinated 2.5 million of its inhabitants (out of 9 million) decreed Sunday evening the suspension of international rapes until January 31.

Egypt began its vaccination campaign on Sunday, starting with health professionals. People with chronic diseases and the elderly will follow.

The country, second in Africa to launch large-scale vaccination after Seychelles, has opted for the Chinese vaccine from Sinopharm. Doses of the AstraZeneca-Oxford vaccine are also expected.

The Moroccan authorities have, for their part, opened appointments for vaccination, the first step of a free and “gradual” national campaign scheduled for next week.

More than 63.5 million doses of the vaccine have been administered in at least 68 countries or territories, according to an AFP count.

In Europe, discontent is mounting over the delivery delays announced by AstraZeneca and Pfizer.

The President of the European Council, Charles Michel, called for pharmaceutical companies to be “transparent”.

Italian Foreign Minister Luigi Di Maio said on Sunday that future lawsuits announced by Italy will aim to “recover the doses” promised by the two laboratories.

Hit hard by the resurgence of the pandemic, Germany will for its part next week be the first EU country to use the experimental antibody-based treatment administered to former US President Donald Trump when he had been contaminated.

For its part, Australia has issued its first authorization for a vaccine, that of Pfizer, Prime Minister Scott Morrison announced on Monday.

The first doses should be administered from the end of February.

Confined for a week, Portugal, which this weekend recorded records of contaminations and deaths, voted on Sunday in an extraordinary presidential election which saw the re-election in the first round of outgoing President Marcelo Rebelo de Sousa. 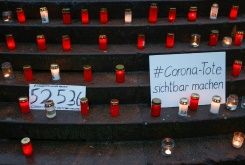 With more than 85,000 contagions and nearly 1,500 deaths, Portugal occupies over the past week the first world rank in number of new cases and deaths in relation to its population, exceeded only by Gibraltar.

While the Covid-19 pandemic continues to disrupt economies, depriving millions of people of work or resources, the richest have so far emerged unscathed or even strengthened from the health crisis, according to the NGO Oxfam, which published on Monday. its annual report.

Globally, billionaires saw their fortune increase by 3,900 billion dollars between March 18 and December 31, 2020, according to the NGO which renews its call to tax wealth in order to fight “the virus of inequalities”.

© 2021 AFP. All rights of reproduction and representation reserved. All the information reproduced in this section (dispatches, photos, logos) are protected by intellectual property rights held by AFP. Consequently, none of this information may be reproduced, modified, redistributed, translated, exploited commercially or reused in any way whatsoever without the prior written consent of AFP.

These were the details of the news 4:11 am – Virus: concern mounts over variants, the United States reinstates entry restrictions for this day. We hope that we have succeeded by giving you the full details and information. To follow all our news, you can subscribe to the alerts system or to one of our different systems to provide you with all that is new.