“Global Industry 4.0 Conference“, a boon for “Made In Morocco” 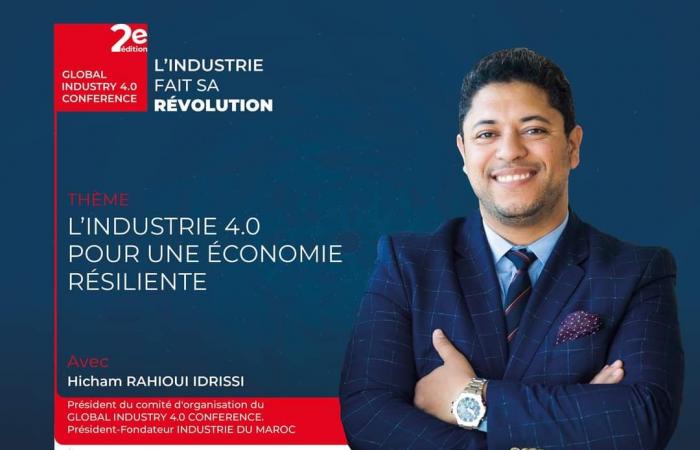 Industries.ma : Today, the concept of Industry 4.0 is gaining popularity in business circles, the world of industry and of course the press… In a very simple way, what does this concept mean?

The concept of Industry 4.0 can be defined as the integration of digital technologies into means of production, as well as products. These are the internet, wireless sensors, artificial intelligence, big data, etc. Thus, the application of these technologies to the existing automation of the existing means of production makes it possible to lead to a new type of factories called “smart factories”, that is to say intelligent factories, or connected. This concept has arisen in Germany since 2011 where it was presented for the first time, and repeated on a loop from around the world …

The excitement that there is around is explained by the fact that, just like the three great industrial revolutions known to mankind: the first in the 1760s which saw the appearance of the mechanization of production thanks to the steam engine whose main source was coal, the second which led to the production of mass through standardization under the impetus of electricity and petroleum in 1870, then the recent one in the middle of the 20th century with automated production thanks to computer technologies and electronics, we are in a new era of industry .

And that will undoubtedly generate new business models and work processes. It is because we are still in the early days that we are talking about a concept, otherwise it is a real industrial revolution that is underway.

The question that burns the lips then is to know what pushes a press group like INDUSTRIE DU MAROC to organize an event around Industry 4.0.

Hicham RAHIOUI : I will answer you quite simply that it is our very role of press which pushes us to this type of action, because it is not only the «Global Industry 4.0 Conference» to our credit. Since as you know, the mission assigned to the press is to provide information. So by already bringing this information on the progress to our target community, we are fully assuming our role. Furthermore, MOROCCO INDUSTRY is a specialized press, the first in Morocco, moreover, in industry, investment and innovation. This shows very clearly that in all respects we are challenged and we are doing «Global Industry 4.0 Conference» to sensitize the entire Moroccan industrial community, which nevertheless represents one million jobs and almost 23% of GDP, of this important change which is underway and which is completely disrupting the value creation chains. You know, today with this industry 4.0, the industrial company is able to react more quickly to market changes, increase its operational efficiency and increasingly personalize the product. All this while significantly reducing production costs while maintaining practically the same levels of earnings. Professionals place these margins in the order of 25 to 30%.

You will then have understood that the manufacturers who will have quickly taken the train will derive a huge profit, in terms of competitiveness and market share. On the other hand, those who will have remained on the platform, will simply bite their fingers. And rightly so «Global Industry 4.0 Conference» constitutes an alert to our industrial community so that Industry 4.0 is not considered as a distant concept, but rather that it realizes that it is a current reality in which it must engage without delay. In short, the «Global Industry 4.0 Conference» because INDUSTRIE DU MAROC, in addition to fulfilling its role of press, remains convinced that this new industrial revolution is a great opportunity for our country which is now embarking on a major industrial shift aimed at reducing its imports by stimulating local production, and increase its exports. We said it yesterday, we say it again today, Industry 4.0 is a boon for “Made In Morocco”.

Industries.ma: You are in the second edition. Having said that, what conclusions did you draw from the first one?

The 1st edition of “Global Industry 4.0 Conference” which took place on November 13, 2019 in Casablanca on the theme “Industry 4.0 towards a new local and international industrial model” mobilized 500 manufacturers, around twenty speakers and three panels . I can assure you that it was a great success, because we had very good feedback from the industrial community and it helped move the lines.

Industries.ma : And what will be the added value of this edition so that we do not witness the reheating?

Already for the 2021 edition, the figures have practically doubled, we have 8 participating countries which are Germany, China, Japan, Canada, France, Belgium, the Emirates and Morocco, host country of course. We have more than 30 speakers and 4 panels. In terms of participants, the event, which is presented in a hybrid format, has already registered nearly 2000 registrations.

This is already indicative of the interest and international mobilization around this event. But what even makes the charm of this edition is the consistency of the scientific program. This is why renowned speakers, all of high rank and endowed with world-renowned expertise in the field, from all over the world, have not hesitated to grant their contribution to a theme, the fruit of ‘careful consideration, namely: “Industry 4.0 at the service of a resilient economy” which will be broken down into 04 Panels, each as relevant as the next.

The first, which is “Industry 4.0 for a resilient economy, the ins and outs”, will deal with the inputs and outputs allowing Industry 4.0 to contribute to the resilience of the economy.

The roles of industry 4.0 technologies for a resilient company” will deal with the technologies used, and ensuring the industrial company a lasting resilience. And the last two panels will be, in a way, benchmarks on the successes in the field of Industry 4.0 in the countries of Germany, China, Canada, Japan, France, Belgium, the United Arab Emirates. and of course Morocco. Considering the large number of countries, which is why we held two panels on the same theme which is “The“ Use cases ”at the international level of Industry 4.0”.

And who are these renowned speakers who are expected at this conference?

These speakers, I will not be able to name them all because we have more than thirty of them, but they are all big names. We count among distinguished guests like Messrs Moulay Hafid Elalamy, Minister of Industry, Trade, Green and Digital Economy, Li Yong, Director General of the United Nations Organization for Industrial Development, Prof. Mostapha BOUSMINA , President of EuroMed University, whose institution is a pioneer in research and development and houses the Smart Factory experimental site in Morocco, and Amine Zarouk, president of the digital umbrella in Morocco, APEBI.

Alongside these personalities, we will have experts such as Yoku Yasunaga, Head of UNIDO’s Office for Investment and Technology Promotion in Tokyo, Hajar Musannif, Laureate and Expert in Artificial Intelligence, Omar Fergani, Executive Partner at Stratfield in Berlin, Abderrahmane Kheddar, Researcher at the Institute of Science and Technology attached to the Robotics Laboratory in Tokyo, Eric Lepine, Industry 4.0 expert and Yves Dandurand, CEO of Adfast of Canada, and many others. Manufacturers, flagships of Industry 4.0, some others in the process of being implemented, specialists at the heart of the development of applications and transformation processes.

Industries.ma : A word to the expected audience?

Hicham RAHIOUI : To the members of our target community, I will simply say that the event is hybrid, which facilitates their presence at this business-forum which is very important for their activity and the performance of their company. We also want to reassure them that the distance will not detract from the special cachet of this business forum. Thus, they will be able to benefit from BtoB exchanges with stakeholders via UNIDO’s ITPO Run

The World Today platform. To do this, they can register for free on the link https://industry4.ma/#register to register on the BtoB platform, or subscribe to our YouTube page to have access to the 2nd “Global Industry 4.0 Conference ”.

It is certain that those for whom all this still seems vague will be able to better understand the challenges of Industry 4.0, while those who are willing to get involved but do not know what to do will, at the end of it, have answers and solutions to their concerns. As for those who are already involved, they will be served with the latest innovations in the field. To all of them, we invite them to meet this Wednesday, January 27 at 9 a.m.

These were the details of the news “Global Industry 4.0 Conference“, a boon for “Made In Morocco” for this day. We hope that we have succeeded by giving you the full details and information. To follow all our news, you can subscribe to the alerts system or to one of our different systems to provide you with all that is new.