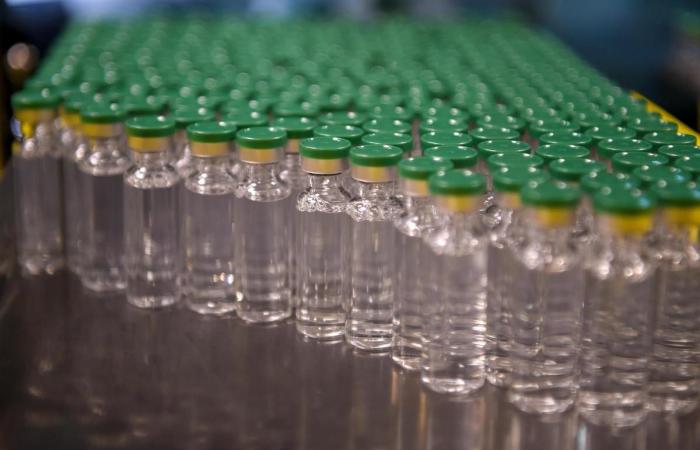 The European Commission had initially reserved up to 400 million doses of this vaccine. A vaccine manufacturing site faces a “drop in yield”.

Deliveries of the AstraZeneca / Oxford vaccine in Europe – subject to its approval, scheduled for January 29 – will be smaller than expected, due to a “drop in yield” at a manufacturing site, the group said Friday evening British to AFP.

The European Commission had initially reserved up to 400 million doses of this vaccine.

“Very, very bad news,” lamented Austrian Minister of Health Rudolf Anschober. “We are not prepared to accept it and we will fight” so that the deliveries are “caught up as quickly as possible”, he said. According to him, Austria should receive in February only “340,000 doses” of the AstraZeneca vaccine, against 650,000 initially expected.

Lithuania, for its part, has estimated the reduction in doses of AstraZeneca vaccines for the first quarter at 80%.

Less direct, the French and German officials tried for their part to reassure populations already on edge because of the slowness of the vaccination campaign.

The vaccination plan is not called into question by the announced delivery times, assured the Minister for Industry, Agnès Pannier-Runacher on Saturday. “We have new vaccines arriving, we have Pfizer which is increasing its production capacity,” she said on France Inter radio.

In Germany, the Minister of Health Jens Spahn was also reassuring: after the authorization of the vaccine in the EU expected in a week, “there will be deliveries of AstraZeneca in February,” he said. said. “How much, we still have to clarify it with AstraZeneca and the European Union in the coming days”, he added however.

In Sweden, national immunization coordinator Richard Bergström said he expects his country to receive around 700,000 doses in the first month after the vaccine is approved, up from 1 million expected doses.

Norway, not a member of the EU but which follows EMA decisions on authorizations, has expressed its “disappointment”.

The country’s main health authority, FHI, now expects to receive only 200,000 doses of AstraZeneca vaccine for the month of February, up from 1.12 million doses initially expected.

The delays announced last week in deliveries of the Pfizer-BioNtech vaccine have already aroused the wrath of European countries.

“We believe that Pfizer is currently at fault,” lambasted in the Stampa Saturday the leader of the Italian crisis cell for the pandemic, Domenico Arcuri, confirming that Italy intended to attack the American laboratory in justice. “

The 20% reduction in Pfizer vaccine supplies is not an estimate, but a sad certainty,” he said, insisting that Italians’ right to health is not “negotiable”.

Friday, the French Secretary of State for European Affairs Clément Beaune had asked Pfizer “to honor its commitments” of deliveries.

The AstraZeneca / Oxford vaccine has the advantage of being cheaper to produce than that of its rivals. It is also easier to store and transport, especially that from Pfizer / BioNTech which must be stored at very low temperatures (-70 ° C).

The pandemic has killed more than 700,000 people in Europe (around 50 countries and territories), where more than 32 million people have been infected.

These were the details of the news Coronavirus – After Pfizer, delays in AstraZeneca vaccine deliveries worry Europe for this day. We hope that we have succeeded by giving you the full details and information. To follow all our news, you can subscribe to the alerts system or to one of our different systems to provide you with all that is new.