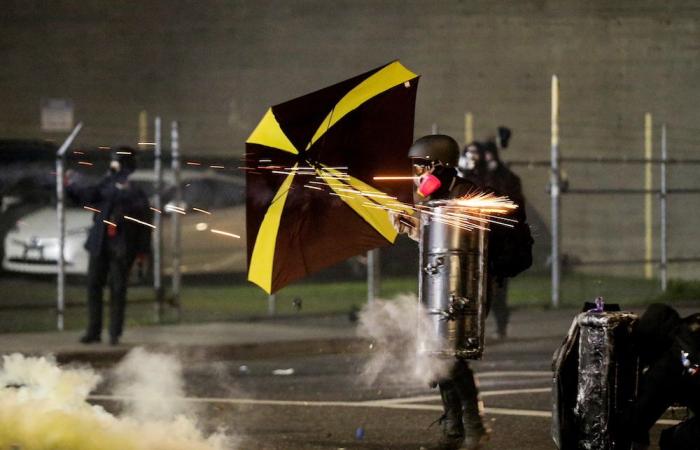 Hello and welcome to the details of Protests hit Portland, Seattle hours after Biden inauguration and now with the details

The Pacific Northwest region emerged as a hotbed of demonstrations last year, but any hopes that the end of Donald Trump’s term in office would quickly halt violent unrest tied to far-left groups were dashed Wednesday.

Local CBS affiliate KOIN 6 News witnessed “what appeared to be tear gas, as well as stun grenades and less-lethal munitions like pepperballs.”

In Seattle, police said they had arrested at least three members of a group who smashed windows, tagged buildings with graffiti and burned a US flag.

Law enforcement did not comment on the nature or political agenda of the protests.

But the violence and vandalism emerged on a day when several far-left demonstrations were planned to put pressure on the new administration to swiftly introduce immigration, racial justice and policing reforms.

According to the New York Times, one flyer handed out at the Seattle demonstration attacked Biden over “his stupid” crime bill passed in 1994, which was blamed for leading to mass incarcerations.

Within hours of taking office Wednesday, Biden signed a raft of executive orders, including measures to give millions of undocumented migrants a path to citizenship that the Trump administration denied.

The Democratic Party of Oregon said in a statement to AFP it was “frustrated and disappointed” by the damage to its offices — which were empty — but would not be deterred “from our important work.”

Protests in the Northwest region were initially triggered last year by anger over killings of Black Americans by law enforcement officers across the country.

Inflamed by the arrival of federal officers and right-wing militias, including the so-called Proud Boys, protests turned deadly over the US summer. — AFP

These were the details of the news Protests hit Portland, Seattle hours after Biden inauguration for this day. We hope that we have succeeded by giving you the full details and information. To follow all our news, you can subscribe to the alerts system or to one of our different systems to provide you with all that is new.