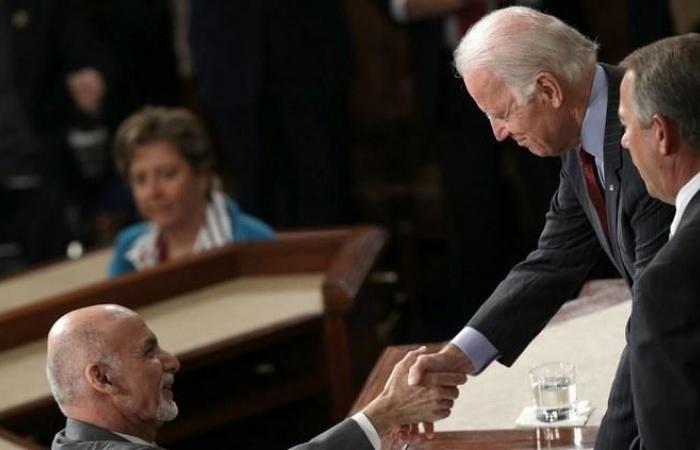 Jeddah - Yasmine El Tohamy - KABUL: Afghan President Ashraf Ghani has expressed hopes of a new chapter in the country’s relationship with the US, describing Joe Biden’s inauguration as a “historic day.”
Experts say that after Kabul’s troubled relationship with the Trump administration, the Afghan leader a “will breath a sigh of relief” as Biden steps into the White House.
Ghani’s ties with Trump soured in recent years over secret talks between Washington and the Taliban.
The negotiations led to a peace deal in February 2020 that paved the way for a complete withdrawal of US-led troops from Afghanistan by May this year. As the US begins the pullout, 2,500 US troops soldiers still remain on Afghan soil.
However, in the face of rising Taliban attacks since the accord, Ghani’s deputies have been pushing the new US administration to review the deal.
“Congratulations, President @JoeBiden, for a new beginning on this historic day,” Ghani wrote in a tweet on Wednesday.
“In these trying times, Afghanistan stands alongside the US — our foundational partner — as it starts anew to restore partnerships for peace and to tackle the multilayered problem of terrorism,” he said.
The US-Taliban deal has also led to talks between the Kabul government and the militants in Qatar in a bid to agree on a cease-fire and a power-sharing arrangement that will end decades of armed conflict in Afghanistan.
Negotiations began in September, but have made no headway as both parties wait to see if Biden will review the deal signed by the Trump administration.
The Taliban made no comment on Thursday about Biden assuming power, but its leaders previously have said they expect him to honor the February agreement.
Ahmad Shah Katawzi, a former Afghan diplomat in the US, said that the Afghan leader will be relieved that Biden has arrived in the White House.
“Ghani can breath a sigh of relief. Hopes are growing that there will be a reassessment of the peace deal, a cautious approach to the troop withdrawal, and more pressure on the Taliban,” he told Arab News.
“Kabul has been angered and alienated in the peace process from the beginning. The government did not favor the hasty military pullout agreed in the February peace deal,” he said.
While there have been few clues about the new US government plans for Afghanistan, Antony Blinken, Biden’s choice for the top diplomatic slot, indicated earlier this week that the deal might be reviewed.
“We have to look carefully at what has actually been negotiated. I haven’t been privy to it yet,” he said during his nomination hearing on Tuesday.
However, some analysts believe that the new US leader faces a difficult task deciding his next step.
“Biden has to decide quickly if he wants to go ahead with Trump’s agreement,” Tameem Bahiss, a regional analyst, told Arab News. “If he does, he has very little time to persuade Kabul and withdraw all US forces before the deadline.”

These were the details of the news Ghani looks to ‘new beginning’ in US-Afghan ties for this day. We hope that we have succeeded by giving you the full details and information. To follow all our news, you can subscribe to the alerts system or to one of our different systems to provide you with all that is new.