On Day One, Biden to undo Trump policies on climate, virus 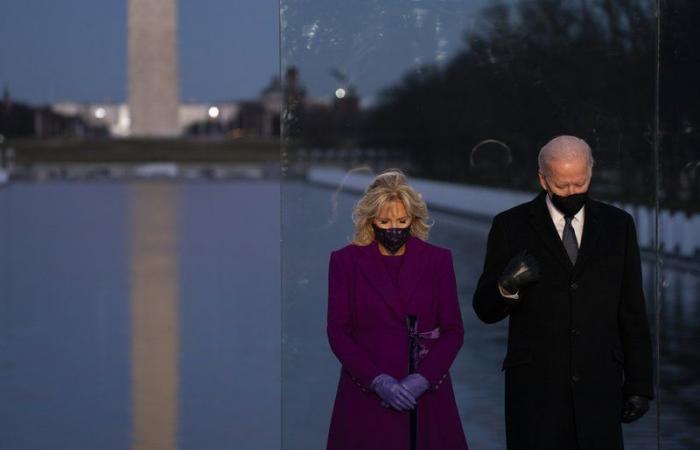 You are now following the details of the On Day One, Biden to undo Trump policies on climate, virus news and now we leave you with the details

Mohamed Nass - Cairo - WASHINGTON (AP) — In his first hours as president, Joe Biden will aim to strike at the heart of President Donald Trump’s policy legacy, signing a series of executive actions that reverse his predecessor’s orders on immigration, climate change and handling of the coronavirus pandemic.

Biden on Wednesday will end construction on Trump’s U.S.-Mexico border wall, end the ban on travel from some Muslim-majority countries, rejoin the Paris Climate Accord and the World Health Organization and revoke the approval of the Keystone XL oil pipeline, aides said Tuesday. The new president will sign the orders almost immediately after taking the oath of office at the Capitol, pivoting quickly from his pared-down inauguration ceremony to enacting his agenda.

The 15 executive actions are an attempt to essentially rewind the last four years of federal policies with striking speed. Only two recent presidents signed executive actions on their first day in office — and each signed just one. But Biden, facing the debilitating coronavirus pandemic, is intent on demonstrating a sense of urgency and competence that he argues has been missing under his predecessor.

“I think the most important thing to say is that tomorrow starts a new day,” said Jeff Zients, Biden’s choice to lead a new White House office that will coordinate the federal government’s revamped response to the pandemic.

The orders reach well beyond the pandemic. Biden intends to order a review of all Trump regulations and executive actions that are deemed damaging to the environment or public health. He will order federal agencies to prioritize racial equity and review policies that reenforce systemic racism. He will revoke a Trump order that sought to exclude noncitizens from the census and will order federal employees to take an ethics pledge that commits them to upholding the independence of the Justice Department.

These actions will be followed by dozens more in the next 10 days, aides said, as Biden looks to redirect the country without having to go through a Senate that Democrats control by the narrowest margin.

Notably, the opening actions did not include immediate steps to rejoin the Iran nuclear accord, which Trump abandoned and Biden has pledged to reimplement. Jen Psaki, the incoming White House press secretary, said that while they were not included in Biden’s Day One orders, the new president will in the coming days revoke the Pentagon’s ban on military service by transgender Americans as well as the so-called Mexico City policy, which bans U.S. funding for international organizations that perform or refer women for abortion services.

Psaki said the actions to be taken Wednesday were focused on providing “immediate relief” to Americans.

In another effort to signal a return to pre-Trump times, Psaki said she would hold a news briefing late Wednesday in a symbol of the administration’s commitment to transparency. Trump’s White House had all but abandoned the practice of briefing reporters daily.

Biden will sign the actions during his first visit to the Oval Office in four years. Since then, presidential order actions were often marked by clumsy announcements and confusion. In their first days in office, Trump’s team was forced to rewrite executive orders by court order and aides took days to figure out how to use the White House intercom to alert press about events. The repeatedly canceled plans to hype new building programs — dubbed “Infrastructure week” — became a national punchline. Biden aides, by contrast, are aiming to demonstrate they are up for the job right out of the gate.

Biden senior aides, led by deputy chief of staff Bruce Reed and campaign policy chief Stef Feldman, began plotting out the executive action plans in November, just days after Biden won the presidency and drafting began in December. The final documents were reviewed by career staff at the Justice Department’s Office of Legal Counsel in recent weeks before Biden’s swearing-in to ensure they would pass legal muster.

Biden’s team was set begin assuming the reins of power even before the Marine Band finished its rendition of “Hail to the Chief” after the new president takes the oath of office.

Aides were due to begin entering the White House complex at the stroke of noon — when Biden officially assumes the office — to begin overseeing national security roles. The urgency was hasten by concerns about security around the Inauguration after the U.S. Capitol insurrection.

COVID-19 restrictions, along with tight security surrounding the Inauguration were severely curtailing the number of aides in Biden’s West Wing. Aides, one official said, were told to pack snacks to eat in their offices because of pandemic protocols.

These were the details of the news On Day One, Biden to undo Trump policies on climate, virus for this day. We hope that we have succeeded by giving you the full details and information. To follow all our news, you can subscribe to the alerts system or to one of our different systems to provide you with all that is new.