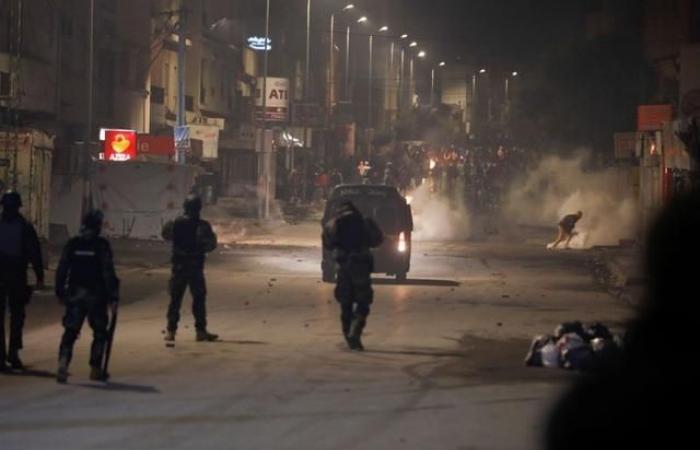 Mohamed Nass - Cairo - Up to 300 young men clashed with police in the capital’s Ettadamon district, Reuters journalists there said, while residents of Kasserine, Gafsa, Sousse and Monastir described street violence in those cities.

Rioting and protests have followed the 10th anniversary of a revolution that brought democracy but few material gains for most Tunisians, with anger growing at chronic joblessness and poor state services.

However, with no clear agenda, political leadership or backing from major parties, it is not clear whether the demonstrations will gain momentum or die down, as many previous rounds of protests have since 2011.

The crowd in Ettadamon on Monday chanted no slogans during their clashes with police who wore body armour and carried batons. Security forces patrolled the area in military-style vehicles.

A decade after throwing off the shackles of autocratic rule, Tunisia was heading towards an economic crisis even before the global coronavirus pandemic struck last year, wrecking the tourism industry and locking down other businesses.

An Interior Ministry spokesman said on Monday that police had detained 632 people on Sunday alone after what it called rioting across the country that included looting and attacks on property. Most of the detainees were aged 15-20, it said.

In Tunis’ central Bourguiba Avenue, a tree-lined boulevard flanked by government offices and colonial-era buildings where the biggest protests in 2011 took place, demonstrators on Monday said they wanted people arrested in recent days to be released.

“They call everyone who protests against the system a thief…We have come with exposed faces by day and not by night to say we want jobs…We want dignity,” said Sonia, an unemployed graduate who did not want to give her family name.

Demonstrators with her chanted “no fear, no fear! The street belongs to the people!”

In his home Mnihla district of Tunis, President Kais Saied addressed a crowd of dozens of people affirming their right to “jobs, freedom and dignity”. He warned that some political forces sought to manipulate the protesters to “sow chaos”.

These were the details of the news Young Tunisians clash with police days after revolution anniversary for this day. We hope that we have succeeded by giving you the full details and information. To follow all our news, you can subscribe to the alerts system or to one of our different systems to provide you with all that is new.