The first storm of winter sweeps across Quebec 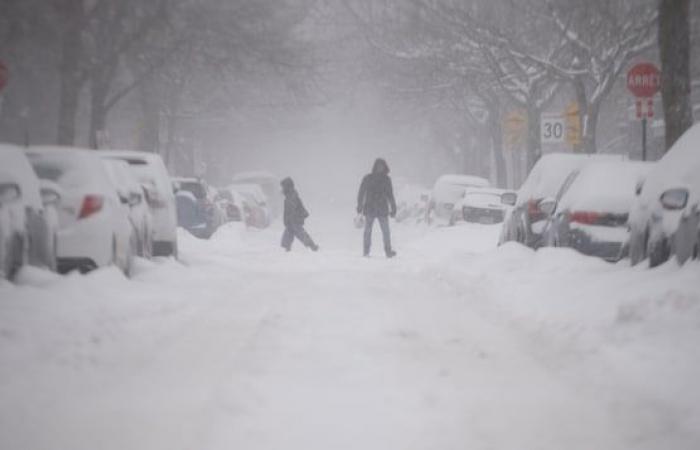 The rapid accumulation of snow is already making it difficult to travel in several places. The roadway was snow-covered before dawn in southwestern Quebec, especially in Montreal, where heavy precipitation was also expected until the afternoon.

Several storm warnings are in effect, due to reduced or almost zero visibility in some areas at times, under heavy snow and blowing snow.

Snow accumulations will average 15 to 35 centimeters by Sunday, according to Environment Canada, and may go up to 50 centimeters in the Gaspé. The snow should stay on the ground with a return to colder temperatures early in the week.

Of course, we are late compared to normal. There are a lot of places where there is less snow than normal. It’s not unheard of, but it’s still exceptional, as a delay , underlines Simon Legault, meteorologist from Environment and Climate Change Canada.

It is because of the softness that we have experienced in recent weeks. Since the end of November, we’ve had a lot of balmy weather, he recalls.

This first snowfall will cover much of the province and should gradually move east into the Maritimes.

The portrait by region

In the greater Montreal area, snowfall amounts should total between 15 to 20 centimeters by Sunday morning, according to Environment Canada forecasts.

The biggest accumulations of snow are still north of Montreal, where we will have 25 to 35 centimeters of snow, perhaps, in the Laurentian mountains and as far as Charlevoix.

In Mauricie, the rapid accumulation of snow could particularly make travel difficult, as the region expects to receive up to 35 centimeters of snow by Sunday morning.

It’s going to be windy in the east, along the St.Lawrence River, notes the meteorologist.

In fact, in the greater Quebec City region, strong winds will complicate the life of motorists, causing blowing snow. The forecast calls for between 15 and 30 centimeters of snow.

In the Charlevoix region, snow accumulations will total between 15 and 30 centimeters by Sunday. There too, snow and winds will make travel difficult.

The Outaouais will also receive its first falls, for which the amount of snowfall is estimated at 15 to 25 centimeters.

In the Baie-Comeau region in the evening, because of the snow and the winds, the winter conditions could even become dangerous. In Saguenay, Tadoussac, on the North Shore, in the Bas-Saint-Laurent, in Gaspé and in the Matapedia Valley, the federal agency reports 15 to 30 centimeters of snow.

In the Gaspé, Quebeckers are very likely to go out frequently to shovel since the storm could leave up to 50 centimeters of snow there, starting on Saturday morning. A storm surge warning is in effect for the Percé, Forillon National Park and Gaspé sectors. Higher than normal water levels are forecast as well as big waves near the coast on Saturday.

As for the regions of Abitibi-Témiscamingue, Chibougamau and the Lower North Shore, they should not receive significant amounts of snow at the end of the week.

Back to colder weather

After the snow, the weather is fine, but this beautiful winter landscape will not only capture us with its beauty. A return to seasonal norms is announced for next week and temperatures below seasonal norms are even expected in some areas.

We won’t have extreme cold. It’s just that there will be a contrast between what we are currently experiencing which is sweet. So we’re going to find it cold, after the storm.

For example, in the Quebec City region, where the temperature has been oscillating around freezing for a few days, the change will be striking.

We will still have the sun, but the nights will be below normal, which is below -15 ° C. So we’ll get back to what winter is supposed to be, comments the meteorologist.

These were the details of the news The first storm of winter sweeps across Quebec for this day. We hope that we have succeeded by giving you the full details and information. To follow all our news, you can subscribe to the alerts system or to one of our different systems to provide you with all that is new.