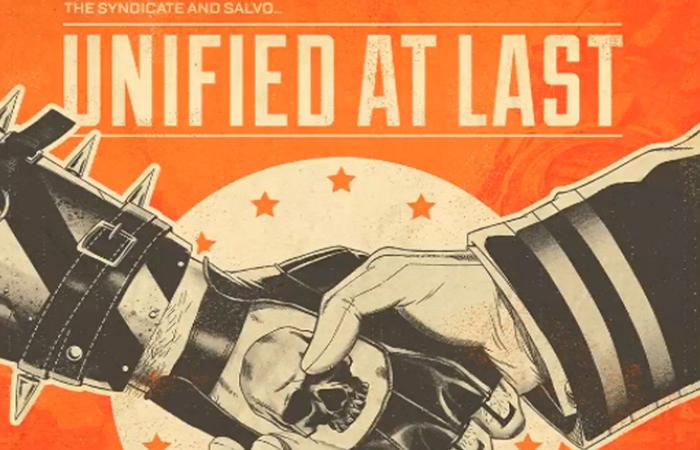 As Apex Legends Season 8 approaches, Respawn has started rolling out teasers regarding the Next Legend, possible new modes, and even another planet.

On January 15, Respawn announced the return of Kings Canyon as well as Mirage’s Voyage, but they didn’t stop there.

Later today, they shared on social media what seems like a first clue as to what’s in store for players in Season 8. This new teaser notably mentions Salvo, whom we’ve heard about in the past.

On the picture we can read “The Syndicate and Salvo… finally united. Approved by the Unification Committee. ” At the end of the animation, a stamp appears with the logo of Salvo MC (presumably Salvo Motorcycle Club).

What is Salvo in Apex Legends?

Salvo is another planet in the Wilderness, which does not depend on the Syndicate, at least until now. The most important information we have on Salvo comes from a letter that was on Wattson’s desk.

The letter on Wattson’s desk spoke of Salvo and the Syndicate.

“I am writing to inform you that Salvo, who rejected the Mercenary Syndicate’s position to join Syndicate Space in 2722, is now being guided by new leaders sympathetic to the cause of peace in the Wildlands.

Discussions with this new administration were prolonged, but ultimately fruitful; As of today, the Mercenary Syndicate Treaty has been amended and Salvo will become the seventh world to join Syndicate Space.

Salvo brings with him [censuré]. In the next [censuré], the Public Relations Office will deploy a social network [censuré] to dispel any inaccuracies regarding [censuré] in order to create a [censuré] appropriate for their integration into the Union, [censuré] including exciting new developments within the Apex Games.

At the moment, do not correspond with the captions on this subject. Expect further instructions [censuré] from our office in the days to come. ”

Salvo, a new map for season 8?

Unfortunately, that’s unlikely, at least for now. On the one hand, Olympus has barely landed on Apex with season 7. On the other hand Salvo is a planet, not a unique place (for example, Olympus is a city on the planet Psamathe).

A link with the legend of season 8?

Still, there’s a good chance Salvo will be the home planet of the new legend, which dataminers say will be called Fuse, and whose abilities revolve around explosives.

Another clue to mention is the spaceship that we can now spot above the Canyon of the Kings and Olympus. On the ship we can read a message that says a lot: “Salvo joins the Union”.

Expect to see more teasers on Season 8, Salvo, and the New Legend in the coming weeks. In all likelihood, season 8 should begin in early February, a good time to blow out the 2 candles of Apex Legends.

These were the details of the news Apex teaser leaks news about new planet Salvo for this day. We hope that we have succeeded by giving you the full details and information. To follow all our news, you can subscribe to the alerts system or to one of our different systems to provide you with all that is new.