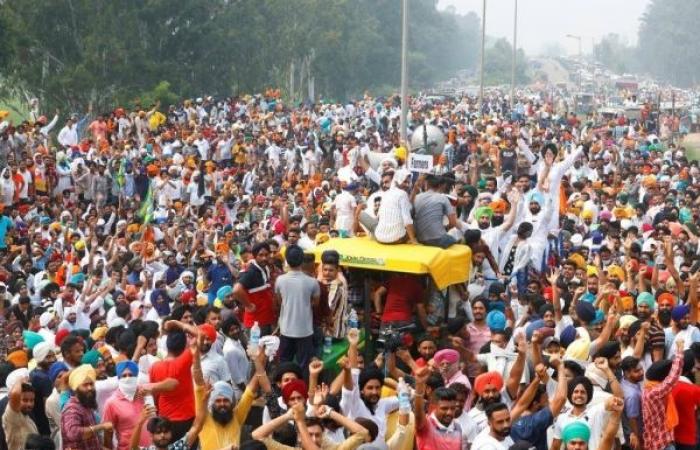 In an order issued Tuesday, the court said that the decision to suspend the laws "may assuage the hurt feelings of the farmers and encourage them to come to the negotiating table with confidence and good faith."

The laws were first passed in September. For decades, the Indian government has offered guaranteed prices to farmers for certain crops, providing long-term certainty that allows them to make investments for the next crop cycle.

The new laws, initiated by the government of Prime Minister Narendra Modi, instead allowed farmers to sell their goods to anyone for any price — giving them more freedom to do things such as sell directly to buyers and sell to other states.

But farmers argued that the new rules would leave them worse off by making it easier for corporations to exploit agricultural workers, and help big companies drive down prices. While farmers could sell crops at elevated prices if the demand is there, conversely, they could struggle to meet the minimum price in years when there is too much supply in the market.

More than 100,000 people have been protesting the laws since late November.

There have been sit-ins lasting days along each of New Delhi's three borders. Farmers have blocked roads and set up makeshift camps, some sleeping on the road or in their tractors. They arrived from numerous different states to participate in the mass protests, at times clashing with police.

All the while, the government has held eight rounds of talks with leaders of more than 30 farmers' unions that are opposed to the laws — but the talks went nowhere.

The stalemate prompted the Supreme Court to suspend the laws on Tuesday and order the formation of a four-member mediation committee to help the parties negotiate in a "congenial atmosphere." The mediation committee must meet within 10 days and submit its first report within two months of that meeting, according to the order.

The court also said on Tuesday that the minimum support price protection would be maintained until further orders — one of the primary points of friction between the government and farmers. Under the court order, "no farmer shall be dispossessed or deprived of his title as a result of any action taken under the Farm Laws."

However, the umbrella group representing farmers' unions, Samyukt Kisan Morcha, has repeatedly said it would not participate in any court-appointed mediation — and reiterated this point after the new order was issued.

"This is the mischief of the government that they want to relieve pressure from their shoulders so they have asked for this Supreme Court committee, to which we are opposed," farmers' leader Balbir Singh Rajewal said at a news conference on Tuesday, adding that the committee members are all pro-government.

The attorney general representing the government in the matter also criticized the Supreme Court order, saying they "opposed vehemently" any interim stay.

The laws have been so contentious because agriculture is the primary source of livelihood for about 58% of India's 1.3 billion population, and farmers have been arguing for years to get the minimum guaranteed prices increased. They are the biggest voter block in the country — making farming a central political issue. — Courtesy CNN

These were the details of the news India puts 3 contentious farm laws on hold following massive protests for this day. We hope that we have succeeded by giving you the full details and information. To follow all our news, you can subscribe to the alerts system or to one of our different systems to provide you with all that is new.