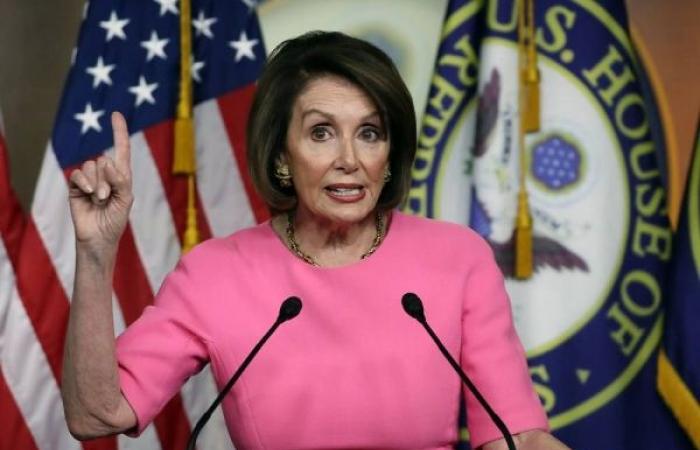 We show you our most important and recent visitors news details US Democrats step up Trump impeachment plan; FBI warns of more armed protests in the following article

Hind Al Soulia - Riyadh - WASHINGTON — Poised to impeach, the House sped ahead Monday with plans to oust President Donald Trump from office, warning he is a threat to democracy and pushing the vice president and Cabinet to act first in an extraordinary effort to remove Trump in the final days of his presidency.

Trump faces a single charge — “incitement of insurrection” — after the deadly Capitol riot in an impeachment resolution that the House will begin debating Wednesday.

The House plans to vote Wednesday to impeach Trump and will vote Tuesday evening on a resolution urging Vice President Mike Pence to invoke the 25th Amendment to remove Trump from power.

Calls for Trump's resignation or impeachment continue to intensify, with a growing number of Republicans saying they want Trump out of office before President-elect Joe Biden is sworn in on Jan. 20.

Meanwhile, Assistant House Speaker Rep. Katherine Clark made a final appeal to Vice President Mike Pence Monday, asking him to “step up to his constitutional duties” and invoke the 25th Amendment, even as Democratic House leadership pursue an impeachment vote as soon as Wednesday.

"We would ask once again that Mike Pence step up to his constitutional duty, invoke the 25th Amendment and remove the President because that is the fastest way to expel him from the presidency," the Massachusetts Democrat told CNN.

Clark's comments came on the heels of new reporting that Pence and President Trump had met for the first time since the Capitol riots.

Trump and Pence spoke Monday for the first time since a deadly riot broke out as Pence was presiding over the Senate last Wednesday, according to two administration officials.

A senior administration official told CNN they met in the Oval Office, had what was described as a good conversation and discussed the week ahead while "reflecting on the last four years of the administration's work and accomplishments."

"They reiterated that those who broke the law and stormed the Capitol last week do not represent the America first movement backed by 75 million Americans, and pledged to continue the work on behalf of the country for the remainder of their term," the senior official said.

In another development, the FBI warned ominously on Monday of potential armed protests in Washington and many states by Trump loyalists ahead of President-elect Joe Biden’s inauguration, Jan. 20. In a dark foreshadowing, the Washington Monument was being closed to the public amid the threats of disruption, Euronews reported.

It all adds up to stunning final moments for Trump’s presidency as Democrats and a growing number of Republicans declare that he is unfit for office and could do more damage after inciting a mob that violently ransacked the US Capitol last Wednesday.

“President Trump gravely endangered the security of the United States and its institutions of government,” reads the four-page impeachment bill. “He will remain a threat to national security, democracy, and the Constitution if allowed to remain in office,” it reads.

House Speaker Nancy Pelosi is summoning lawmakers back to Washington for votes, and Democrats aren't the only ones who say Trump needs to go. A number of House Republicans may vote to impeach him, while others at least want to vote for censure. Former GOP Speaker John Boehner said, “it's time” for Trump to resign.

Republican Sen. Pat Toomey of Pennsylvania, joined GOP Sen. Lisa Murkowski of Alaska over the weekend in calling for Trump to “go away as soon as possible.”

As security tightened, Joe Biden said Monday he was “not afraid” of taking the oath of office outside — as is traditionally done at the Capitol's west steps, one of the areas where people stormed the building.

As for the rioters, Biden said, “It is critically important that there’ll be a real serious focus on holding those folks who engaged in sedition and threatening the lives, defacing public property, caused great damage — that they be held accountable.”

As Congress briefly resumed on Monday, an uneasiness swept government. More lawmakers tested positive for COVID-19 after sheltering during the siege. And new security officials were quickly installed after the Capitol police chief and others were ousted in fallout from the extraordinary attack on the iconic dome of democracy.

Pending impeachment, Democrats called on Vice President Mike Pence and the Cabinet to invoke constitutional authority under the 25th Amendment to remove Trump from office before Inauguration Day.

Their House resolution was blocked by Republicans. However, the full House is to hold a roll call vote on it Tuesday, and it is expected to pass. After that, Pelosi said Pence will have 24 hours to respond. Next would be the impeachment proceedings.

Pence has given no indication he is ready to proceed on a course involving the 25th Amendment and a vote by a majority of the Cabinet to oust Trump before Jan. 20. No member of the Cabinet has publicly called for Trump to be removed from office in that way.

House Majority Leader Steny Hoyer, D-Md., offered the resolution during Monday's brief session. It was blocked by Rep. Alex Mooney, R-W. Va., as other GOP lawmakers stood by him.

Pelosi said the Republicans were enabling Trump's "unhinged, unstable and deranged acts of sedition to continue. Their complicity endangers America, erodes our Democracy, and it must end.”

The impeachment bill from Reps. David Cicilline of Rhode Island, Ted Lieu of California, Jamie Raskin of Maryland and and Jerrold Nadler of New York draws from Trump's own false statements about his election defeat to Biden.

The impeachment legislation also details Trump's pressure on state officials in Georgia to “find” him more votes, and his White House rally ahead of the Capitol siege, in which he encouraged thousands of supporters last Wednesday to “fight like hell” and march to the building.

The mob overpowered police, broke through security lines and windows and rampaged through the Capitol, forcing lawmakers to scatter as they were finalizing Biden’s victory over Trump in the Electoral College.

While some have questioned impeaching the president so close to the end of his term, Democrats and others argue he must be held accountable and prevented from holding future public office. He would be the only president twice impeached.

House Democrats have been considering a strategy to delay for 100 days sending articles of impeachment to the Senate for trial, to allow Biden to focus on other priorities.

There is precedent for pursuing impeachment after an official leaves office. In 1876, during the Ulysses Grant administration, War Secretary William Belknap was impeached by the House the day he resigned, and the Senate convened a trial months later. He was acquitted.

Nebraska Sen. Ben Sasse said he would take a look at any articles that the House sent over. Illinois Rep. Adam Kinzinger, a frequent Trump critic, said he would “vote the right way” if the matter were put in front of him.

Cicilline, leader of the House effort to draft impeachment articles, tweeted Monday that “we now have the votes to impeach,” including 213 cosponsors and private commitments.

Freshman Republican Rep. Peter Meijer said he is seriously considering casting a vote to impeach President Trump. Speaking to CNN, Meijer said Trump's words and actions on Wednesday had disqualified him to occupy the Oval Office.

Meijer, a Michigan Republican who previously supported the president, said he "had a break" on Wednesday when Trump did little to stem the attack on the Capitol.

"The one person who could have put an end to that violence, the President, he put out the video that said, 'We love you, you're special, come home,'" said Meijer. "No condemnation, no urge to bring things back. To me that was an abject failure of leadership and something just broke then."

Meanwhile, New England Patriots head coach Bill Belichick announced that he is declining the Presidential Medal of Freedom, which he was scheduled to receive from President Trump on Thursday. Belichick cites the “tragic events of last week” as leading to his decision.

In a statement released Monday night Belichick said, “Recently, I was offered the opportunity to receive the Presidential Medal of Freedom, which I was flattered by out of respect for what the honor represents and admiration for prior recipients."

"Subsequently, the tragic events of last week occurred and the decision has been made not to move forward with the award. Above all, I am an American citizen with great reverence for our nation’s values, freedom and democracy,” he said.

Also, Amazon said Monday it will withhold future political contributions from US lawmakers who voted against certifying the 2020 election results.

"The Amazon PAC gives to congressional candidates on a bipartisan basis based upon the interest of our customers and our employees," an Amazon spokesperson said.

"Given the unacceptable attempt to undermine a legitimate democratic process, the Amazon PAC has suspended contributions to any Member of Congress who voted to override the results of the US Presidential election.

“We intend to discuss our concerns directly with those Members we have previously supported and will evaluate their responses as we consider future PAC contributions.”

Amazon is the latest company to announce that it is suspending donations to members of Congress who objected to the Electoral College's votes. The list of those corporations, includes American Express, BlueCross BlueShield, Commerce Bank, Dow and Marriott (MAR).

Comcast too later said it is suspending all of its political contributions “to those elected officials who voted against certification of the electoral college votes, which will give us the opportunity to review our political giving policies and practices.”

In a statement to CNN on Monday, the telecommunications company called the rioting at the US Capitol “appalling,” adding that the transition of power this year “will take place among some of the most challenging conditions in modern history.” — Agencies

These were the details of the news US Democrats step up Trump impeachment plan; FBI warns of more armed protests for this day. We hope that we have succeeded by giving you the full details and information. To follow all our news, you can subscribe to the alerts system or to one of our different systems to provide you with all that is new.