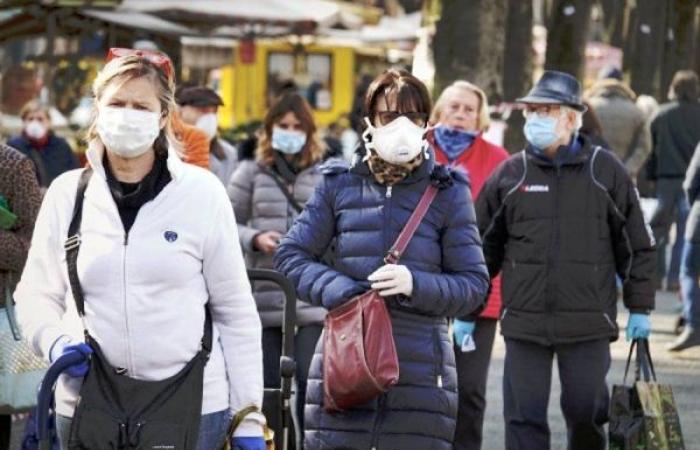 Coronavirus is continuing its spread across the world with over 90 million confirmed cases in 218 countries and more than 1.94 million deaths. The virus is surging in many regions and countries that had apparent success in suppressing initial outbreaks are also seeing infections rise again.

The US recorded Sunday 269,623 new coronavirus cases in the past 24 hours as the confirmed cases nation-wide crossed 26 million. It also recorded 3,655 virus-related deaths according to Johns Hopkins University.

The tally showed that the confirmed cases nationwide reached 22,132,396 and at least 372,428 deaths across US, with the country remaining the world’s worst hit by the pandemic.

Furthermore there were a record 130,777 people currently hospitalized for coronavirus in the US, according to COVID Tracking Project. The US ranks first globally in the number of coronavirus cases and deaths.

India and Brazil have the second and third highest case tallies, recording some 10.3 and 7.7 million cases respectively. Infections have been reported in more than 218 countries and territories since the first cases were identified in China in December 2019.

In London, Britain said that the death toll from coronavirus has risen by 563 to 80,431, the Department of Health and Social Care said on Sunday. As many as 59,940 more lab-confirmed cases raised the country’s overall count to more than three million, according to the department’s daily update.

In Moscow, Russia reported 23,315 new coronavirus cases on Sunday, bringing the total number of confirmed infections to 3,425,269 after it crossed the 3.4 million mark.

Russia's coronavirus crisis center said 436 coronavirus patients had died in the last 24 hours and the overall national coronavirus death toll was at 62,2737. They added 21,786 people recovered from the virus, raising the total number of recoveries to 2,800,675.

In Berlin, German health authorities reported on Monday 343 deaths and 12,497 new coronavirus cases in the past 24 hours. The Robert Koch Institute (RKI) for infectious diseases said the country’s death toll increased to 40,686 cases and the total confirmed cases those to 1,921,024.

In Paris, the French Health Ministry reported 15,944 new coronavirus infections over the past 24 hours on Sunday. France's cumulative total of cases now stands at 2,783,256. The COVID-19 death toll was up by 151 at 67,750. France announced on Friday its approval of the use of Moderna COVID-19 vaccine and to include it in its vaccine program.

In Rome, Italy’s death toll from the coronavirus outbreak hit 78,755 on Sunday after 361 more people succumbed to the disease over the past 24 hours, Health Ministry data showed.

Some 23,427 new cases were logged in the same period to raise the total in one of the world’s worst-affected countries to 2,276,000, according to government figures. It noted 1,618 people recovered from the virus in the past day, taking the tally to more than 1,618,000 recoveries since the outbreak of the pandemic.

In Brussels, total infections of coronavirus cases in Belgium on Monday increased to 664,263 with 1,569 new infections reported by Belgian health authorities. They reported 40 more deaths from COVID-19 in the last 24 hours raising the total death toll to 20,078.

In Vienna, Austrian authorities announced Sunday that they recorded 1,651 new coronavirus cases raising the total number of confirmed infections to 380,772. More than 353,000 cases have recovered since the start of the pandemic, said the country’s Health Ministry.

In New Delhi, India said on Monday that 161 people died due to COVID-19 while 16,311 new cases of the coronavirus were registered in the past 24 hours. The Ministry of Health and Family Welfare said that fatalities due to COVID-19 rose to 151,160 as the total number of positive cases mounted to 10,466,595.

According to the ministry, 10,092,909 people recuperated from the pandemic as it spread to 35 states. India has the world's second-highest caseload, but daily infections have dipped steadily since hitting a peak in September.

Tokyo added a record 1,219 new infections, topping 1,000 for the seventh straight day, which brought the total cases in the Japanese capital to 76,163. In an effort to curb the spread of coronavirus variants, Prime Minister Yoshihide Suga declared a state of emergency for Tokyo and three surrounding prefectures. It had suspended new entries of non-resident foreign nationals from around the world to Japan through Jan. 31.

In Seoul, South Korea reported 451 new coronavirus cases Monday, Yonhap reported in the past 24 hours, bringing the total caseload at 69,114, according to the Korea Disease Control and Prevention Agency (KDCA).

Fifteen people died in the past 24 hours raising the death toll to 1,140. Of the newly identified local infections, 137 cases were reported in Seoul and 142 cases in Gyeonggi Province that surrounds the capital.

In Rio de Janeiro, Brazil has registered more than 7.7 million cases of the virus since the pandemic began, while the official death toll has risen to 195,725, according to ministry data. Brazil ranks third in terms of infection numbers globally, behind the United States and India. On fatalities, Brazil ranks second behind the US.

Africa Centers for Disease Control and Prevention (Africa CDC) reported on Sunday that the total number of COVID-19 cases throughout countries of the African continent amounted to 3,021,769. COVID-19 death toll across the continent reached 72,121, with 2,450,492 recoveries, Africa CDC confirmed.

As for the virus death toll, 35,268 fatalities were registered in South Africa, 25,762 in North Africa, 6,148 in East Africa, 3,435 in West Africa and 1,508 in Central Africa. In terms of countries, South Africa topped the list of countries most impacted by the contagion with infections and deaths.

In Cairo, the Egyptian Ministry of Health and Population said on Sunday that 989 more people tested positive for the novel coronavirus and 57 patients died over the past 24 hours. The figures took the country’s tally to 148,799 infections and 8,142 deaths the ministry said. Another 765 patients have been discharged from the hospitals, bringing the overall recoveries to 118,294.

In Rabat, Morocco on Sunday said confirmed coronavirus cases had risen by 895 over the past 24 hours, while 34 more people succumbed to the disease to up the country’s death toll to 7,743. The North African nation’s caseload has reached 452,532 since the contagion came to light, according to the Health Ministry’s data, which showed the tally of people who have recovered from the virus till date as 424,896.

In Tunis, Tunisia’s Ministry of Health on Sunday announced 62 deaths from the novel coronavirus and 1,762 more infections in 24 hours. The tally of confirmed deaths and infections rose to 5,215 and 159,276 respectively since the outbreak of the virus. Meanwhile, overall recoveries went up to 117,701.

Meanwhile, Mauritania’s Ministry of Health said Sunday that 83 persons tested positive for the novel coronavirus, bringing the country’s caseload to 15,512. One more fatality in the last 24 hours pushed the death toll from the viral illness to 384. The report said, 129 patients have been discharged from hospitals, raising the overall recoveries to 13,435 cases. — Agencies

These were the details of the news Global coronavirus caseload hits 90.7m; death toll hits 1.94m for this day. We hope that we have succeeded by giving you the full details and information. To follow all our news, you can subscribe to the alerts system or to one of our different systems to provide you with all that is new.