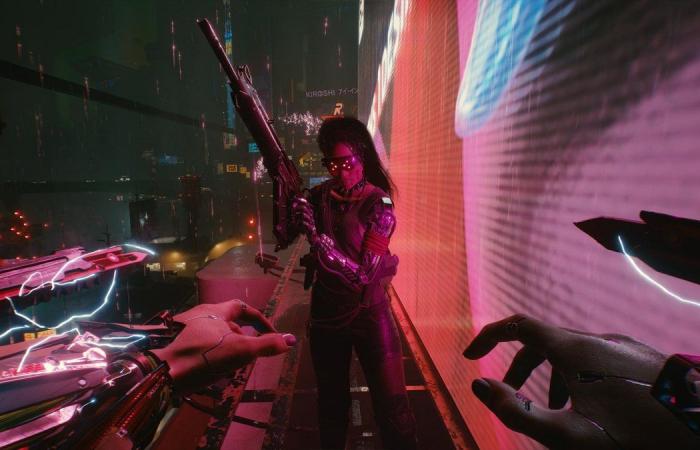 Night City is loud, big and full of freaks. If you explore the “city on the edge of the future” on foot, it takes less than two minutes until you hear the staccato of automatic weapons from somewhere. Opportunities, jobs and side missions await the player on every street corner. With the daring driving style of a madman pursued by the police, it takes just under ten minutes by car to cross the entire “Cyberpunk 2077” map from north to south. The city that CD Projekt Red created as an open game world for the most anticipated game of the year is breathtaking. Like the rest of “Cyberpunk 2077”, Night City is a technical masterpiece, but far from perfect. No simple requirements

CD Projekt Red has not set itself an easy task with its latest blockbuster. The pen-and-paper role-playing game Cyberpunk may epitomize the literary and cinematographic genre of the same name, but the genre’s origins are deeply rooted in the 80s. To modernize this world for a triple A title like “Cyberpunk 2077” so that it can be made palatable to the general public is not easy in itself.

If you have problems playing the video, please activate JavaScript

In addition, the retro-futuristic metropolis in which the game takes place has to be brought to life as an open game world. Every cyberpunk recipe needs a good shot of film noir. And noir is best staged in the rain, in fog or in the sparkling neon light of the night. To create a convincing city of the dark future that survives an entire day-night cycle and complete freedom of movement for the character and then still looks convincing, that is art.

In the streets of Night City

CD Projekt Red’s implementation of the fictional Californian city Night City quickly casts a spell over the player. It’s not perfect, but the six boroughs plus the Badlands on the outskirts are convincing enough to provide a believable stage for the epic story of the game. “Red Dead Redemption” is still unbeaten in December 2020 in terms of open video game worlds. But that’s probably also because the Wild West is characterized above all by the fact that people aren’t running around everywhere. And adding all sorts of wild animals to forests is easier than populating the streets of a big city with convincing cyberpunk freaks.

By and large, the developers have succeeded in realistically breathing life into the cyberpunk world. After a few hours you notice repetitions in the dialogues of the passers-by, but this does not affect the fun of the game. A design decision that takes getting used to is that the play figure never bumps into other people on packed sidewalks and when walking through crowds. These react verbally, but the character itself simply clips through NPCs. Together with the fairly generous damage model of the vehicles, this simplifies movement through the narrow street canyons, but it also makes the game world somehow feel less real.

It’s really nice that you have access to all parts of the city pretty early in the game. At the very beginning the player is limited to smaller parts of the map, but as soon as you are allowed to move freely, you can explore the entire city. And parts of it, like the neon-bathed red-light district of Jig-Jig Street, are really spectacular. And you have to let CD Projekt Red know that they have managed to add charm to their cyberpunk city in the sunlight – even if some key missions are played at night or in strategically emerging rain. The story of “Cyberpunk 2077” always has surprises to offer. And Keanu Reeves convinces in his central role with a lot of skill and gusto – “Cyberpunk 2077” is one of his best acting performances.

The first-person perspective is key to making Cyberpunk 2077 a clear contender for Game of the Year. The really imaginative story, which thrives on many of the core themes of the cyberpunk genre, is inextricably linked with the game’s really innovative interface design. As befits a story in which the modification of one’s own body with the help of implants is in the foreground, the player’s HUD is embedded directly into the game world on the die-table.

In other words: displays such as the minimap or the ammunition quantity of the weapon are projected directly into the brain of the game character V via an implanted cyber eye. Cyberpunk 2077 plays with this mixture of user interface and game world over and over again. The developers have built their own UI engine for this, which not only looks cool, but also dynamically adapts to missions and new events. This only works if the player always sees exactly what his character V also sees. What exactly V can perceive can be expanded into superhuman abilities through implants and cyber components.

The user interface becomes part of the story of the game. And Cyberpunk 2077 always takes full risk with its story. There are just as few taboos on ethical issues as there are with the brutality or nudity of its characters. If you want to break gender boundaries, the character screen at the beginning of the game allows you to assign primary sex organs as you wish, regardless of gender. Of course, you can also adjust the main character’s penis length. However, we couldn’t determine whether this had any effect on the game itself: shoot, sneak, hack

These were the details of the news “Cyberpunk 2077” in the test: brutal retro-futurism that is a lot... for this day. We hope that we have succeeded by giving you the full details and information. To follow all our news, you can subscribe to the alerts system or to one of our different systems to provide you with all that is new.