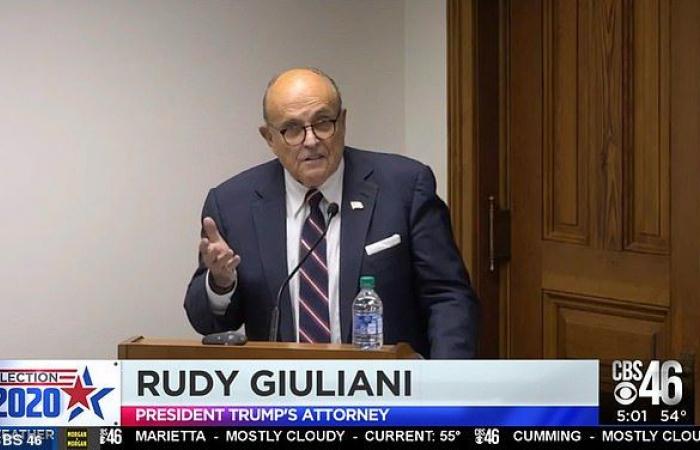 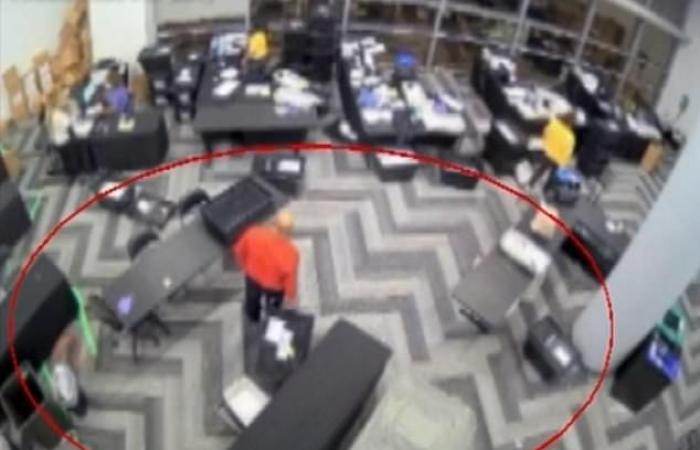 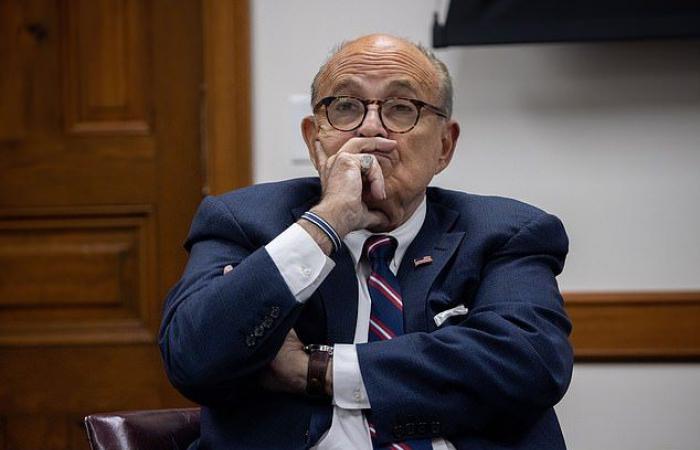 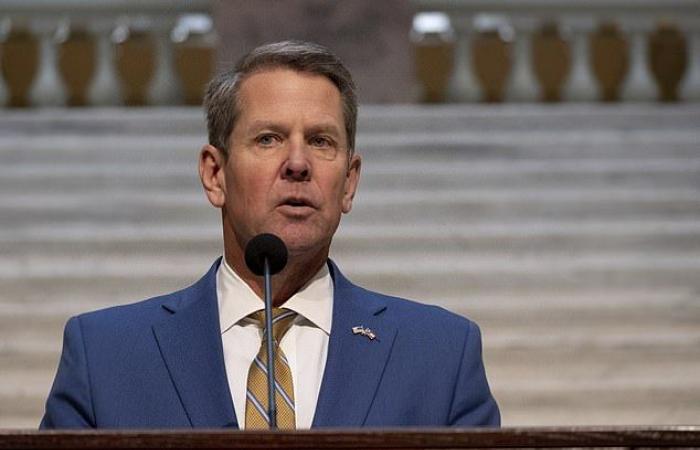 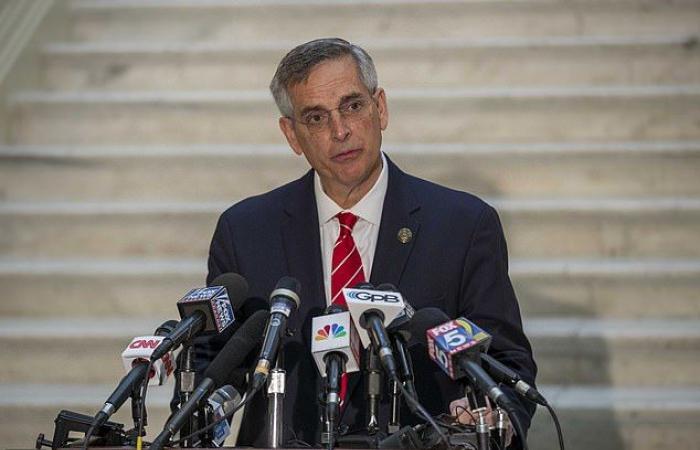 According to CBS, the clip shows people taking out at least four ballot boxes under a table and counting them with no election supervisor present.

Jacki Pick, a volunteer lawyer in Georgia who presented the evidence to the State Senate, said: “The same person who stayed behind, the person who cleaned up the place under the pretext that we are going to stop counting is the person who set the table there at 8.22 in the morning. I saw four suitcases come out from under the table.

During the presentation, Giuliani claimed that in total there had been “231,188 ballots with no return record at all and you were able to 134,000 of them, but you kept 96,600 votes where there was no record back for them ”.

“What does this suggest? Giulani asked. “Phantom votes,” he said. Jacki Pick, a volunteer lawyer in Georgia who presented the evidence to the state Senate, said four suitcases were emerging from under a table at the site with no election supervisor present.

The video is the first time the president’s legal team has presented evidence of electoral fraud.

According to CBS, there are about 6,000 ballots in each ballot box, which, if correct, would represent about 24,000 potential votes.

Biden beat Trump by just over 12,500 votes in Georgia, with Biden receiving nearly twice the record number of mail-in votes as the Republican president, according to the secretary of state’s office.

During the presentation, there was at least one lawmaker who questioned the validity of the video.

“The question is, since this has been repeatedly debunked, what evidence can you give us to counter what our election officials presented to us just an hour ago? Said the legislator.

Pick replied, “You just saw it, your officials have to watch the video. “

Giuliani also presented witnesses to verify the alleged fraud, each claiming to have signed an affidavit under oath.

On Tuesday, a senior Georgia election official criticized the rhetoric surrounding the election and the resulting threats of violence and specifically called on Trump to contain his supporters. 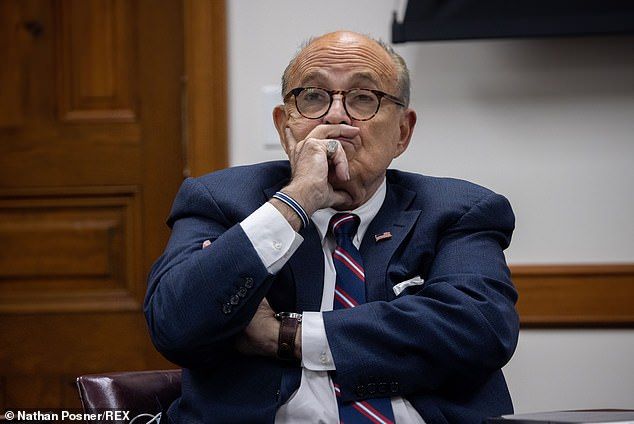 During the presentation, Giuliani (pictured Thursday) claimed that in total there had been “231,188 ballots with no return records at all and you were able to 134,000, but you kept 96,600 votes where there were none. ‘there was no going back for them’ 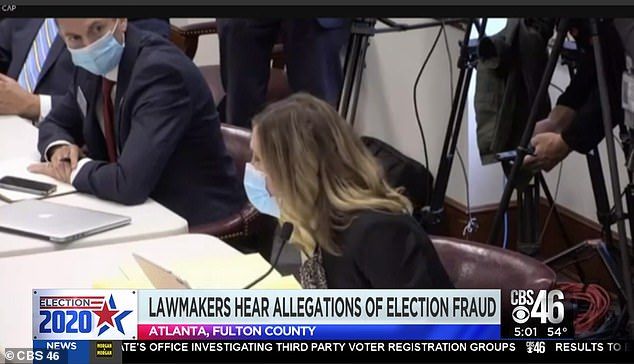 During the presentation, there was at least one lawmaker who questioned the validity of the video, asking “what evidence can you give us that goes against what our election officials presented to us there?” only an hour away?

Gabriel Sterling is a Republican who oversaw the implementation of the state’s new electoral system.

During a routine press conference at the State Capitol to provide an update on the presidential race recount requested by Trump, Sterling warned the president and the two U.S. senators from Georgia, who are both locked up in close races against the Democrats and called on the GOP secretary. state Brad Raffensperger to resign for claiming he mismanaged the election.

“It must stop. We need you to step in, and if you want to take a leadership position, show it.

Trump, however, did not take the blame to heart, reiterating unproven allegations of mail-in ballot fraud in a tweet Tuesday night that responded to an Atlanta TV reporter who tweeted about the Sterling’s denunciation.

“Election rigged,” Trump tweeted. “Show signatures and envelopes. Expose massive electoral fraud in Georgia. What are the Secretary of State and Brian Kemp afraid of? They know what we will find !!!

Kemp told The Ingraham Angle on Thursday that state law gives the secretary of state the power to check or adjust election procedures if necessary.

He claimed he had “called early” Raffensperger to do a signature audit.

‘Obviously, the Secretary of State, according to the laws and the [state] The Constitution should order that and he did not.

“I think it should be done,” Kemp added. Gov. Brian Kemp said on Thursday that state law gives the Secretary of State the power to verify or adjust election procedures if necessary. He claimed he had urged GOP Secretary of State Brad Raffensperger to do a ‘signature audit’ 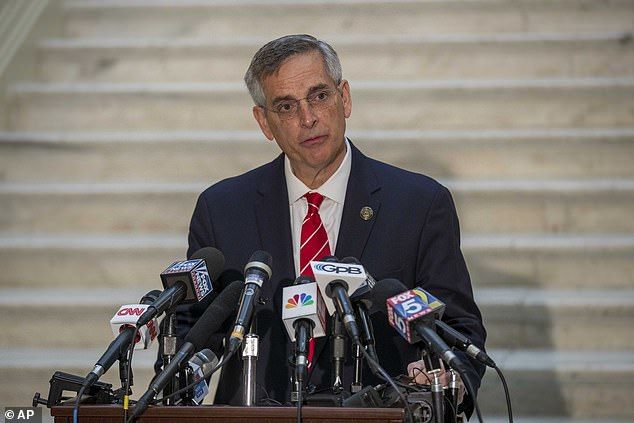 Raffensperger and Sterling both have police officers stationed outside their homes, and the Georgia Bureau of Investigation said it was investigating possible threats against officials to determine their credibility.

Sterling said his anger boiled over when he learned that a Dominion Voting Systems contractor helping with the recount effort in suburban Gwinnett County had received death threats after someone filmed a video of him transferring a report to a county computer and falsely claiming that the young man was manipulating the election. The data.

“There’s a noose over there with his name on it. This is not true, ”Sterling said, adding that the entrepreneur had not sought the spotlight by taking a top job like Sterling or running for a job like Raffensperger. “This kid took a job. He just took a job.

Trump last week called Raffensperger an “enemy of the people,” Sterling noted, adding, “It helped open the floodgates to this kind of shit. “

Trump campaign spokesman Tim Murtaugh said in a statement Tuesday night: “No one should engage in threats or violence, and if that has happened, we fully condemn him. “

“Like many officials, as someone who has been the subject of threats, Senator Loeffler of course condemns violence in all its forms. How ridiculous to suggest otherwise, said Loeffler campaign spokesperson Stephen Lawson.

“We also condemn the inaction and lack of accountability in the process of our electoral system – and will not apologize for speaking out against it. “

These were the details of the news Rudy Giuliani Gives Video “Evidence” of Georgia Election Fraud to Senate... for this day. We hope that we have succeeded by giving you the full details and information. To follow all our news, you can subscribe to the alerts system or to one of our different systems to provide you with all that is new.