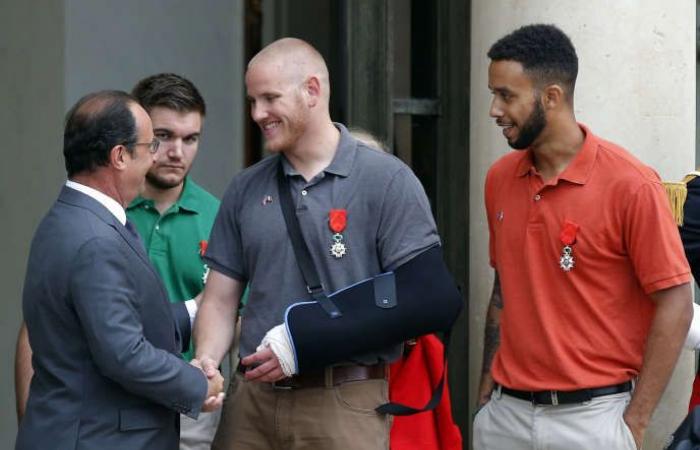 Spencer Stone will have mixed memories of his stays in France. The first time he set foot there, on August 21, 2015, he fought bare-handed with a terrorist armed with a Kalashnikov, a Luger pistol and a cutter on a train. Thalys.

The second time, it was to testify at the trial of this attack, which he partially prevented, before the special assize court in Paris. Victim of discomfort during his flight from the United States, this former American soldier was admitted to the emergency room upon his arrival at Roissy on November 18, and finally returned without a word to his country after five days spent in the hospital. ‘hospital.

Thursday, December 3, Spencer Stone was finally able to tell, by videoconference from California, the long minutes of his clinch with the Moroccan jihadist Ayoub El-Khazzani. After some technical hesitation, the “Hero” Thalys, as several passengers have called it, appears on the screen. White shirt, square jaw and short blond hair, he is about to face an unsuspected adversary: ​​the court interpreter. Before he speaks, the latter asks him to remove his mask so that he can “Read his lips”. The soldier does. And begins his story.

Story: “Like an animal trying to flee its predator”: the Thalys attack told by the passengers

At the end of summer 2015, Spencer Stone is on vacation in Europe with two friends, Aleksander Skarlatos and Anthony Sadler. On August 21, the three young men took the 3:17 pm Thalys from Amsterdam to Paris. The train stops at Brussels station, where jihadist Ayoub El-Khazzani embarks with a rolling suitcase containing a war arsenal. Spencer Stone falls asleep, headphones on. “About thirty minutes later, I was woken up by a train attendant running down the center aisle. I took off my headphones and heard a glass burst and people screaming. “ The interpreter begins to lose track: “Can you speak sentence after sentence?” “

“It was the second time he tried to kill me”

The soldier, who nevertheless expresses himself calmly, resumes. He see “Ayoub”, as he calls it, picking up a Kalashnikov from the ground. While he was asleep, a French bank employee, Damien A., got into a fight with the terrorist in the toilet compartment. A Franco-American English teacher, Mark Moogalian, took advantage of the confusion to grab the rifle. The jihadist shot him in the back with his Luger, then picked up the fallen Kalashnikov in the driveway of Car 12.

You have 66.86% of this article to read. The rest is for subscribers only.

These were the details of the news the American hero, the Moroccan terrorist and the demons of translation for this day. We hope that we have succeeded by giving you the full details and information. To follow all our news, you can subscribe to the alerts system or to one of our different systems to provide you with all that is new.