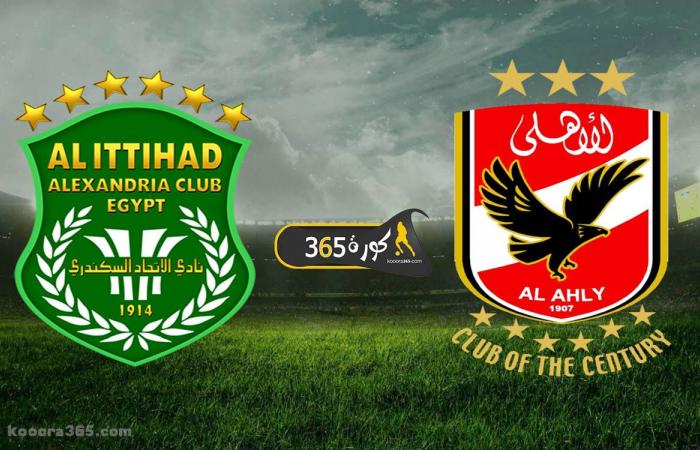 All eyes are on the new Suez Stadium, which is hosting a high-caliber meeting between Al-Ahly and Al-Ittihad of Alexandria, this evening, Tuesday, December 1, for the account of the semi-finals of the 2019/2020 Egypt Cup.

Kora 365 offers a service to watch the Al-Ahly and Al-Ittihad match, a live broadcast today, which is scheduled to start today at 8:00 pm Egyptian time, i.e. 9:30 pm Mecca time, and will be broadcast on the air exclusively on Ontime Sport HD1 with an audio performance by commentator Mohamed Al-Kawalini.

Al-Ahly managed to cross the heel of Abu Qir Fertilizers in the quarter-final stage with two goals for one goal, to cross this role with merit.

The Red Devils received a big moral boost before today’s match, which was achieving the African Champions League title and crowning the ninth star after an absence of 7 years, at the expense of Zamalek, with two goals to one.

The Red Genie, after being crowned with the title, turned this page and focused heavily on the Cup, as he finished his preparations for the day’s meeting with full force, aware of the opponent’s difficulty, but will fight for a victory to cross to the final.

Al-Ahly won the Egypt Cup 36 times in its history, but the last title was in 2016/2017, so he hopes that this cup will return to his club’s treasury again, and this requires them to fight to cross the Alexandrian team’s hurdle and prepare for the final in the best way.

Al-Ahly’s list witnessed the presence of the team’s new deals, namely: Badr Bannon and Taher Mohamed Taher, with the exception of Ahmed Ramadan Beckham, and Nasser Maher, Akram Tawfiq and Salah Mohsen added after they returned from loan to be available in today’s meeting.

On the other hand, Al-Ittihad of Alexandria qualified for this role after the Arab Contractors were stung with a second goal fought by Mr. Salem, to end the match with two goals to a goal after the match would go to extra times in the quarter-finals.

The Alexandrian team, with a new technical leadership under the supervision of Hossam Hassan, who was hired by the club to compete in the midst of the new season, has succeeded in the first cup test against the contractors, and is now clashing with the Al-Ahly team.

Hossam Hassan’s battalion will enter the meeting with full force and ferocity in order to achieve victory and remove the African champion from the cup and continue to deny him the title, and he will use some of the new deals he made to add strength to the team, hoping to provide a strong match worthy of it.

These were the details of the news Live broadcast | Watch Al-Ahly and Al-Ittihad of Alexandria match... for this day. We hope that we have succeeded by giving you the full details and information. To follow all our news, you can subscribe to the alerts system or to one of our different systems to provide you with all that is new.