Romain Grosjean accident: he suffered a shock equivalent to 53 times his weight 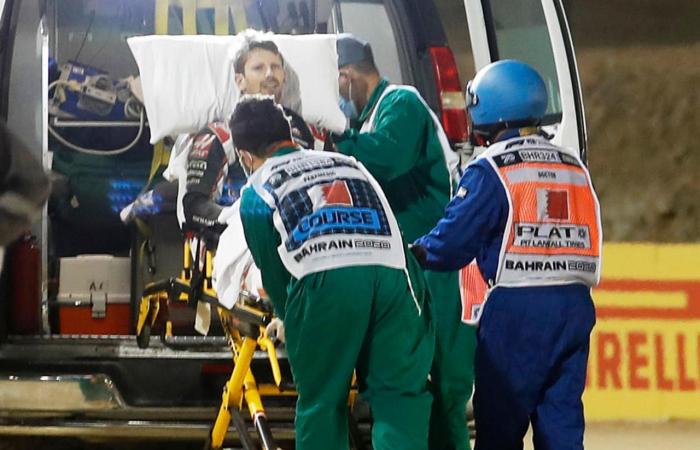 Never in its recent history has Formula 1 recorded such a shock as that caused by the crash of Romain Grosjean on Sunday in Bahrain. According to the International Automobile Federation (FIA), the appalling impact of the car was measured at 53 G in deceleration. During a Grand Prix, an F1 driver collects a maximum of 5 G in the corners, and it is already dangerous for his health.

53 G corresponds to 53 times gravity. When we walk in the street, our force of gravity is 1 G. “G”, for initial of “gravity”, is the unit which allows to measure the acceleration and which corresponds appreciably to that of the gravity at the surface. of the earth. To measure its magnitude, each unit of force G amounts to multiplying the weight of the body by the number of G recorded.

It weighed 3.8 tons at the time of the shock

Romain Grosjean weighs 71 kilos. At the time of the crash, in a fraction of a second, it therefore weighed the equivalent of 3,763 kilos (71 x 53) in total. His heart, about 62 kilos, his liver 310 kilos and his brain 260 kilos. At the time of the shock, all these vital organs came crashing down heavily inside the pilot, on his skull, his muscles, his ribs causing damage which can be extremely serious in the long term.

What about the potential damage to the brain? “It all depends on how Romain Grosjean’s head suffered the impact,” says neurologist Jean-François Chermann. 53 G is spectacular, but you can hurt yourself more with lighter impacts. This depends on the position of the pilot’s head when the impact occurred, if it turned and if ever it did, how the rotation occurred at the moment of the impact: it is the whiplash in English or the blow. rabbit. Fortunately in F1, when it comes to safety, considerable progress has been made with the halo, which considerably reduces the risk of injury. “

The comparison with fighter pilots does not hold up

In our everyday life, it is impossible to imagine what Romain Grosjean’s body has suffered. You can feel the Gs, for example, when you press hard on the mushroom head of your car or when braking very suddenly. This force is felt at takeoff of an aircraft measured at 1.4 G when it pushes its engines or in a roller coaster. The roller coaster rides at amusement parks make you howl at 3 G at most, in the fastest and steepest parts, and that’s enough to be sick.

VIDEO. Romain Grosjean after his F1 accident: “Without the halo, I wouldn’t be here to talk to you”

It may only be fighter pilots who can understand and explain the unthinkable sensation. When he takes off, a Rafale pushes to 10 G and in the event of a sudden extraction, the pilot experiences a force of 30 to 40 G which is difficult to bear: “There is nothing, however, comparable between the accident of Romain Grosjean and the accelerations of a fighter pilot. It is stupid to try to do it as I have read it since Sunday, warns Commander Vincent Roux, of the Air Force. A fighter pilot can in fact collect 10 G but over much longer periods with therefore a risk of fainting due to the lack of irrigation of the brain. Grosjean suffered these 53 Gs well but in an extremely short and instantaneous time, a fraction of a second. The comparison with fighter pilots is not appropriate. “

These were the details of the news Romain Grosjean accident: he suffered a shock equivalent to 53 times his weight for this day. We hope that we have succeeded by giving you the full details and information. To follow all our news, you can subscribe to the alerts system or to one of our different systems to provide you with all that is new.

NEXT Egyptian among militants killed in Philippines firefight