New details about the assassination of Fakhri Zadeh … News of... 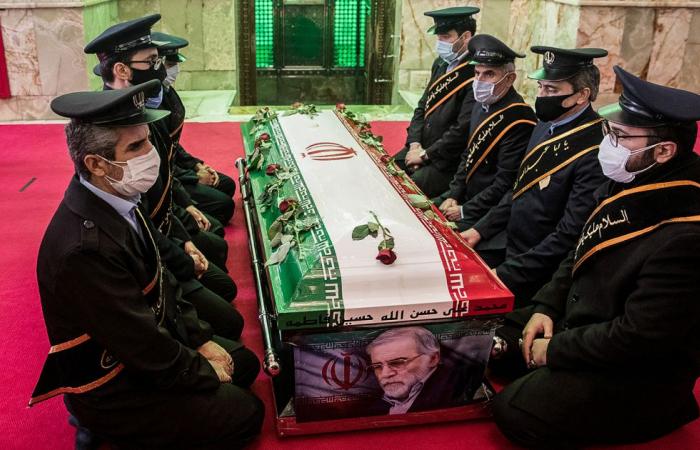 The Secretary of the National Security Council in Iran, Ali Shamkhani, announced new details of the assassination of the nuclear scientist Mohsen Fakhrizadeh, which took place in Tehran on Monday, while the British “Middle East Eye” website revealed that Tehran had threatened to launch a direct military strike on the UAE following the assassination of Fakhri Zadeh In direct contact with the Crown Prince of Abu Dhabi, Mohammed bin Zayed.

Shamkhani said that the assassination was carried out from a distance using new and sophisticated devices, accusing the Israeli Mossad and the Mujahideen Khalq Organization of being behind the operation.

On Monday, a state funeral for Fakhrizadeh was held in Tehran, in the presence of a limited number of senior military and political leaders, without public participation. Because of the health measures associated with the Corona pandemic.

During the ceremony, Iranian Defense Minister Amir Hatami said, “Our response to the assassination of Fakhri Zadeh is coming and is inevitable, and it will be severe punishment for those who committed this crime.”

Iranian Vice President Ishaq Jahangiri described the assassination of Fakhrizadeh as state terrorism, and Jahangiri added – during his participation in the meeting of the prime ministers of the Shanghai Cooperation Organization – that the countries of the world must break their silence in the face of this terrorist crime, as he put it.

In the meantime, “Middle East Eye” revealed (Middle East Eye) Briton reported that Iran had threatened to launch a direct military strike on the UAE, in response to the assassination of Fakhri Zadeh in the event of a possible US attack.

The British website – quoting an unnamed Emirati source – said that Tehran had contacted the Crown Prince of Abu Dhabi, Mohammed bin Zayed, directly, and informed him that it would deal a blow to the UAE in response to the assassination of Fakhri Zadeh.

The Emirati source confirmed – according to the British site – that Tehran will hold the UAE responsible for the assassination of the nuclear scientist, in the event Iran is subjected to a possible US attack.

On the timing of the Iranian call with Mohammed bin Zayed, the source explained that it came shortly before Abu Dhabi condemned Fakhrizadeh’s assassination on Sunday.

The site notes that this information comes in conjunction with Tel Aviv’s warning of attacks that may target Israelis in both the UAE and Bahrain, which recently opened direct airlines with Tel Aviv.

For its part, the Israeli Ministry of Foreign Affairs instructed, on Monday, all its embassies and representatives to raise the level of security alert in anticipation of an Iranian response to the assassination of Fakhri Zadeh, despite its silence about the assassination and responsibility for it.

The Al-Jazeera correspondent said that Tel Aviv had warned the Israelis not to travel to the Emirates and Bahrain, for fear that they would be the target of Iranian retaliation there.

The Washington Post also talked about pledges to avenge the killing of Fakhrizadeh, and said that the Iranian leadership confirmed on Monday to proceed with its nuclear program, while questioning the future of negotiations with the West.

The newspaper says that the assassination of Fakhrizadeh, and the pressure now on the Iranian leadership to take revenge after an embarrassing security failure; It could undermine President-elect Joe Biden’s pledge to return to the nuclear deal between Iran and world powers.

Brennan said – in an interview with the US network, “CNN”, that Tehran could carry out a retaliatory operation after the assassination of the Iranian nuclear scientist.

Brennan called on the international community to condemn the assassination of the Iranian nuclear scientist, noting that this incident targeting Fakhri Zadeh is not like the attacks launched by the United States against other organizations such as Al Qaeda, but rather an attack on an official in a sovereign state.

The Iranian Parliament Speaker Muhammad Bagher Qalibaf sent a letter to the Secretary-General of the United Nations, Antonio Guterres, about the assassination of the Iranian nuclear scientist, in which he affirmed Tehran’s right to pursue and punish the perpetrators and those involved in the assassination of Fakhrizadeh.

He added that the silence of the international community, and its inaction against such terrorist acts, will lead to persistence of those behind them. Qalibaf expressed his country’s expectation that the United Nations would condemn this terrorist act, as described, and provide the necessary legal grounds to prevent its recurrence.

For his part, Stefan Dujarric, a spokesman for the Secretary-General of the United Nations, said that the international organization condemns all assassinations and extrajudicial killings, and renewed the UN Secretary-General’s call on everyone to exercise restraint following the assassination of the Iranian nuclear scientist.

Germany expressed its deep concern about the assassination of the Iranian scientist, which it said could lead to serious consequences in the region, as described. A German Foreign Ministry spokeswoman called on all parties to show restraint.

The Russian Foreign Ministry also condemned the assassination of the Iranian scientist, describing it as a terrorist act, and expressed its grave concern about what it called the provocative nature of the assassination aimed at destabilizing the region.

The agency said that the operation lasted about 3 minutes, and there was no human element at the scene of the assassination, and automatic weapons were fired that were controlled remotely.

She explained that Fakhrizadeh and his wife were inside an armored car, accompanied by 3 escort cars, on the road at Damavand near the capital Tehran on Friday morning.

She indicated that the sound of a few bullets targeting the car caused the motorcade to stop, as Fakhrizadeh left the car, apparently believing that the sound resulted from a collision with an external obstacle or a problem with the car’s engine.

After he got off the car – according to this version – a barrage of bullets was fired from a remote-controlled automatic machine gun, and he was attached to a small truck parked 150 meters away, hitting him 3 bullets, one of which cut his spinal cord, and moments later the pickup exploded.

Fars agency said that investigations showed that the owner of the aforementioned truck left the country the day after the assassination, without naming the party to which it was directed.

In the same context, other local media reported that the weapons used in the assassination were Israeli manufacture and were controlled by means of satellites.

These were the details of the news New details about the assassination of Fakhri Zadeh … News of... for this day. We hope that we have succeeded by giving you the full details and information. To follow all our news, you can subscribe to the alerts system or to one of our different systems to provide you with all that is new.