Archaeologists discover cave paintings in inhospitable terrain in the Amazon |... 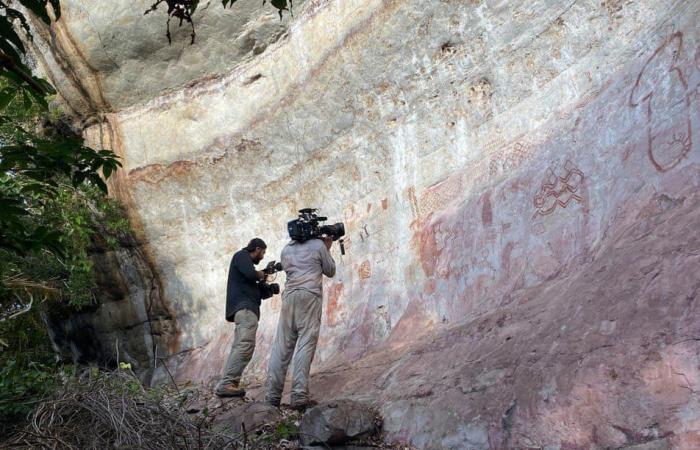 One of the largest prehistoric art galleries in the world was discovered in the Amazon rainforest. The rock paintings of animals and humans are estimated to be approximately 12,500 years old and were found in Colombia, spread over almost 13 kilometers of cliff faces.

Described as the “Sistine Chapel of Antiquity” (a name that is not exactly original), the discovery of these thousands of paintings was made by a team of British and Colombians, funded by the European Research Council (ERC), in a forest area in the mountainous region of Serranía de la Lindosa, where other works of art in stone were already known. In Colombia, the Chiribiquete National Park also has rock art zones identified.

The “Sistine chapel of prehistory” moved there

“When we are there, emotions flow … We are talking about several tens of thousands of paintings. It will take several generations to register them all … There is a new wall of paintings at every curve we make ”, he told the newspaper The Guardian the leader of the investigation, José Iriarte.

To get there, the team had to walk for four hours on forest trails after a two-hour trip from San José del Guaviare, a city 275 kilometers from Bogotá.

The tour included members of the research team and a film crew for a documentary, the reason the discovery has now been announced: the paintings were discovered in 2019, but have been kept secret because they were filmed for the documentary series Jungle Mystery: Lost Kingdoms of the Amazon, scheduled to debut in December.

The researchers estimated the age of the paintings from the rupestrian representations of Ice Age animals, such as the mastodon or palaeolama.

“We started to see images of animals already extinct. The images are so natural and so well done that we had little doubt about whether we were looking at a horse, for example. Prehistoric horses had heavy, wild faces. It is so detailed that you can see the mane of the horses. It is fascinating ”, explains José Iriarte.

The trip to the remote region involved several dangers associated with the wildlife of the forest, but also with the sensitive geo-political environment of the territory, which was the scene, for several decades, of confrontations between the FARC (Revolutionary Armed Forces of Colombia) and the Colombian government. , who now live a period of truce. The entry into territory never explored until now has come to show that there is still much to explore in the forest.

“Entering FARC territory was exactly as some of us had been warning for a long time. The exploration is not over yet. The discoveries are not yet over. Scientific research has not yet come to an end, but the great discoveries are going to be made in hostile and disputed places, ”he told the The Guardian archaeologist Ella Al-Shamahi, presenter of the documentary.

In addition to the long expanse of territory where these images can be found, ranging from small footprints to figures of men and animals at full scale or even larger, the researchers were surprised by the heights at which some of the images were painted: some can only be views using drones​.

These were the details of the news Archaeologists discover cave paintings in inhospitable terrain in the Amazon |... for this day. We hope that we have succeeded by giving you the full details and information. To follow all our news, you can subscribe to the alerts system or to one of our different systems to provide you with all that is new.