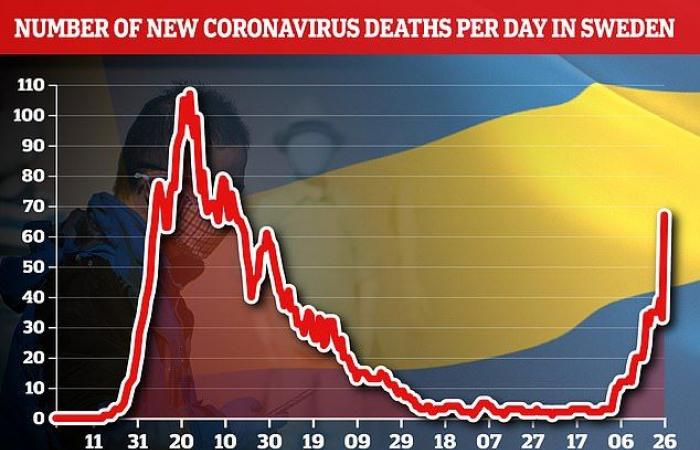 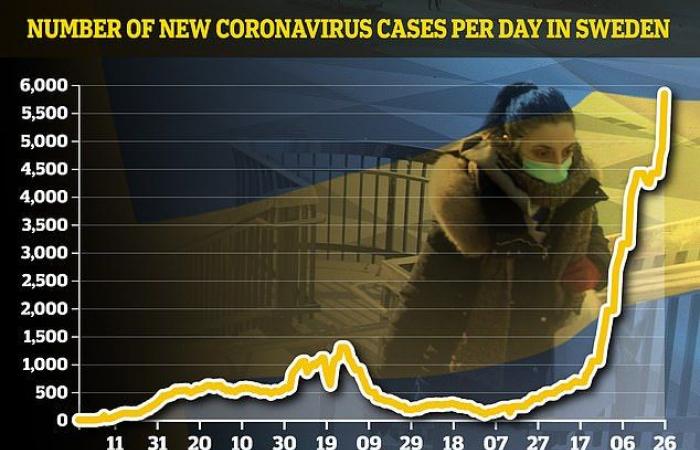 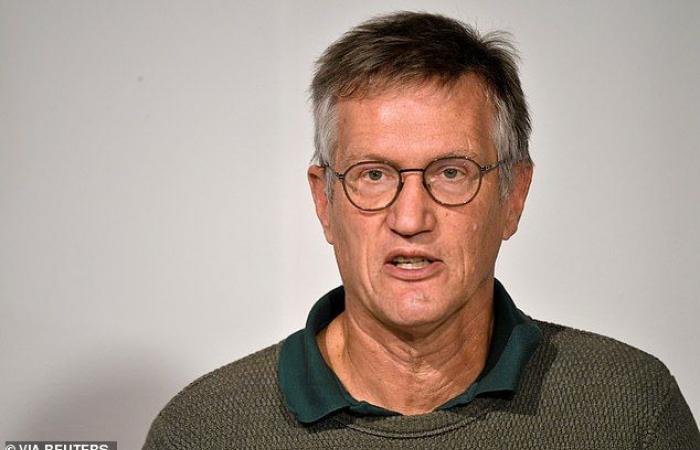 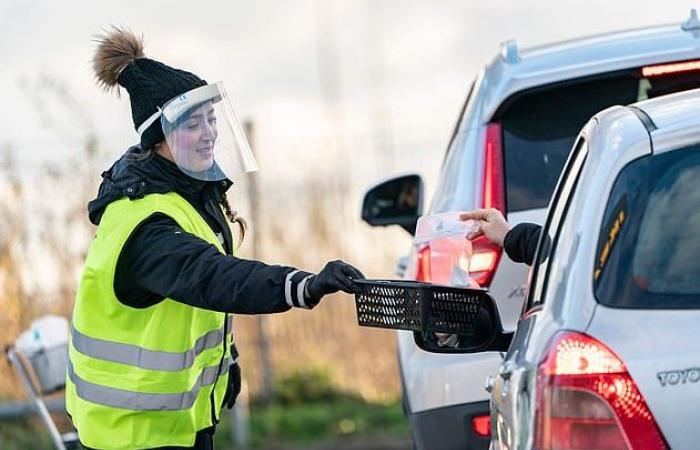 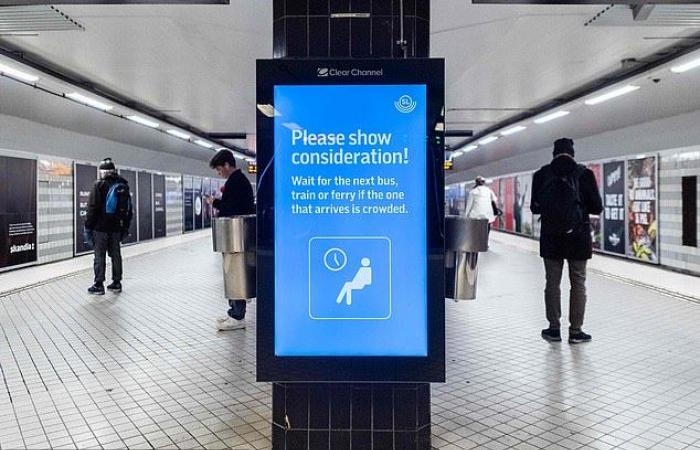 The health expert behind Sweden’s Covid-19 no-lockdown strategy appears to have been pushed off the airwaves amid a ‘split’ in government as the country’s coronavirus death toll continues to rise.

Swedish Prime Minister Stefan Lofven’s press conference ended Thursday, clashing with that of Anders Tegnell, the architect of the country’s liberal approach to the epidemic.

It follows Sweden admitting that it has seen no sign of herd immunity slowing the spread of Covid-19 as the number of new infections rises.

Dr Tegnell had previously claimed that Sweden would fare better than other countries in Wave 2 after instituting a higher level of immunity.

A total of 6,622 people with Covid-19 have died in the country, a per capita total significantly higher than their neighbors Norway, Denmark and Finland, which opted for tighter lockdowns in the spring, but lower than a handful of larger European countries.

A total of 6,622 people with Covid-19 have died in Sweden, a higher per capita total than their neighbors Norway, Denmark and Finland, which opted for tighter lockdowns in the spring. 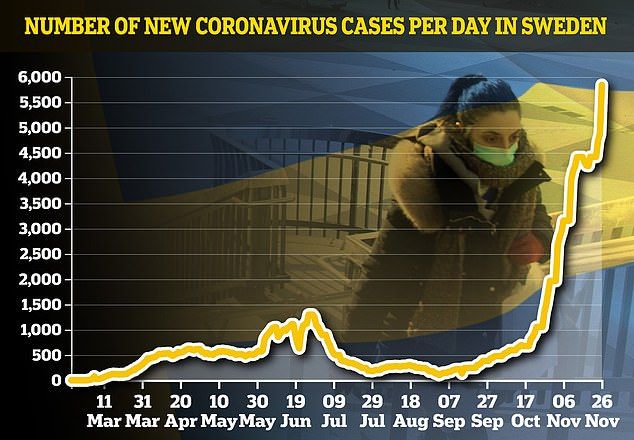 Sweden registered 5,841 new cases on Thursday. Country admitted it had seen no sign of herd immunity slowing the spread of Covid-19 as the number of new infections skyrocketed

Stockholm Södertorn University associate policy professor Nicholas Aylott told the Telegraph: “There is definitely a split, and I’m pretty sure many in government have lost faith in the Agency instead. public health.

“There are charges that we now have exactly the same level of virus spread that we had in the spring, and that’s about as clear a rebuttal of Tegnell’s strategy as you might want. “

Stricter restrictions in place since mid-October, however, may have helped slow the spread of the disease, with the Public Health Agency saying infections could peak in the coming weeks.

The director of the Health Agency, Johan Carlson, told a press conference: “We are optimistic that we can influence the development of the pandemic in this way. “

But he warned that the scenario modeled by his agency was not a forecast and relied on recommendations from the public. “If we don’t get this as planned, we won’t have this development, we will have worse development. “ 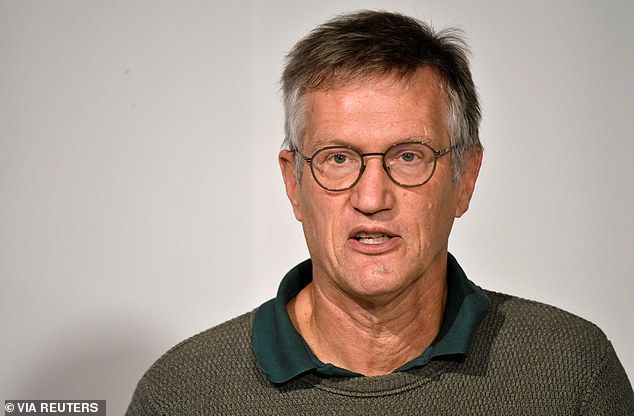 Anders Tegnell (pictured above, October 13) had previously claimed that Sweden would fare better than other Second Wave countries after implementing collective immunity. 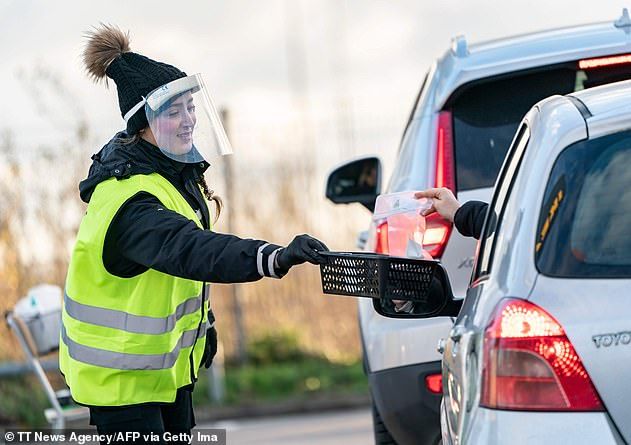 A Covid-19 test is delivered from a car on Thursday in a parking lot at a train station in Malmö, Sweden, as people with symptoms take a test on their own in their vehicle.

The agency said the current rate of new cases was lower than predicted by its model, but that this may reflect an inability of testing, which has been exceeded in some areas, to keep up with the spread of the virus.

The government has given the agency the task of modeling how the pandemic will develop to help authorities and health services in their planning.

The agency has been criticized in Swedish media that its previous attempts at modeling have been inaccurate, for example by predicting that the country will not face a second wave of infections in the fall.

The current scenario is based on infections reported between August 24 and November 6 and other variables.

Last week, Dr Tegnell was forced to admit that Sweden is battling a second wave of the virus after previously downplaying the risk. 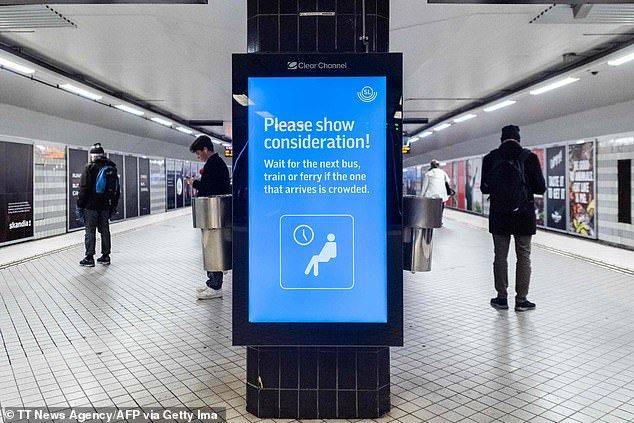 A sign reading “Please show your consideration!” Wait for the next bus, train or ferry if the one arriving is crowded ”at Stockholm central metro station in Sweden on November 19

Stricter restrictions have been issued in 17 of Sweden’s 21 regions by the country’s public health body and Dr Tegnell, along with a 22-hour curfew in bars and pubs.

“It’s a different situation than we had in the spring when it was more local. Now we have a community spread across many areas at the same time, which is part of the reason we are seeing such a high number, ”he said.

Despite growing numbers and growing criticism, Dr Tegnell said on November 13 that Sweden remains steadfast in its approach to the pandemic.

In August, Tegnell attributed the low infection rates to the development of herd immunity to the virus developed in the first wave of spring, when Sweden’s light approach was accused of being one of the rates highest per capita mortality in the world.

“The number of people we don’t find with diagnoses is, with a high probability, smaller than we thought,” he conceded last week.

These were the details of the news Anders Tegnell kicked off the airwaves amid government ‘split’ for this day. We hope that we have succeeded by giving you the full details and information. To follow all our news, you can subscribe to the alerts system or to one of our different systems to provide you with all that is new.