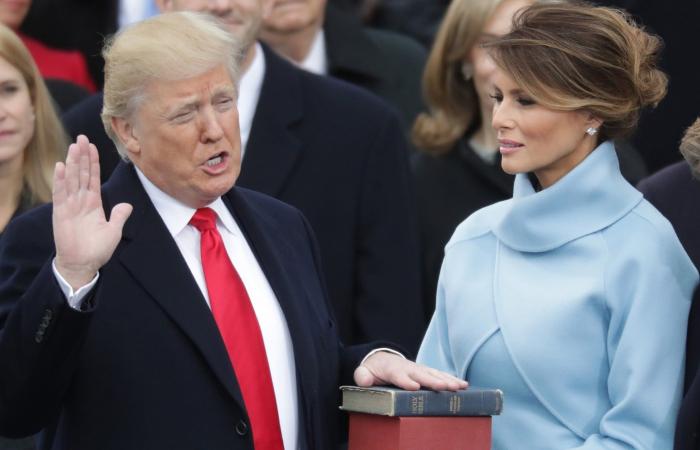 Donald Trump is planning to launch his 2024 election campaign on the day of Joe Biden’s inauguration, it has been reported – considering how to keep him in the spotlight in his post-White House life.

Mr. Trump, who has yet to concede defeat, and may never never, was invited to Thanksgiving if he would attend Mr. Biden’s inauguration on January 20.

The Saturday The daily beast cited three sources who confirmed he was considering a run in 2024, and two of them said he pitched the idea of ​​hosting an event at Mr Biden’s inauguration, to provoke a maximum disturbance.

According to two sources with direct knowledge of the matter, the president has privately boasted that he will always remain in the spotlight, even if Mr. Biden is in the Oval Office, as the media finds Mr. Biden “boring.”

November 9 Axios was among the first to report that Mr. Trump is considering a race in 2024 – which, if successful, would make him only the second man in history to serve two non-consecutive terms. Grover Cleveland was the 22nd and 24th president, elected in 1884 and 1892.

Mr. Trump is determined not to abandon the White House and is fighting in court to, in his own words, “overturn the vote.”

His efforts received their final blow on Friday, when a Trump-appointed judge on a Pennsylvania appeals court handed down a scathing verdict on their case.

“Voters, not lawyers, choose the president. Votes, not writs, decide elections, ”wrote Judge Stephanos Bibas, on behalf of the three-judge panel of the Third Circuit Court of Appeals, made up entirely of people appointed by Republicans.

Jenna Ellis, one of his attorneys, tweeted that they would now seek a Supreme Court resolution – although many legal experts felt the court was unlikely to take the case.

The president’s discussion of a 2024 campaign is seen by his associates as a tacit acceptance that his legal record is going nowhere.

It’s also a way to distract him from his loss, with figures such as Jared Kushner, his son-in-law and daughter Ivanka reportedly tasked with bringing him to the idea that he will be leaving the White House.

His review of a race in 2024 is already sparking a race for power among his supporters, The Daily Beast reported.

At an Oval Office meeting earlier this month between Mr. Trump, Vice President Mike Pence; Mike Pompeo, Secretary of State, and Robert O’Brien, National Security Advisor, the president said he plans to run in 2024, if the 2020 election results are not overturned, reported Bloomberg Thursday.

“If you do this – and I think I’m speaking on behalf of everyone in the room – we’re with you 100%,” Mr. O’Brien said, according to the Bloomberg report.

It is unlikely that everyone gathered was, in private, delighted.

If he runs a 2024 campaign, it would likely thwart the presidential ambitions of Mr Pompeo and possibly Mr Pence. His own son, Donald Trump Jr, uses the hashtag “Trump Jr 2024” and is considered a potential candidate.

It remains to be seen if the president can remain a political force and if he wants to.

On his inauguration day in 2017, Mr. Trump filed documents with the Federal Election Commission to qualify as a 2020 candidate.

These were the details of the news Trump “plans event to announce 2024 campaign on Biden inauguration day” for this day. We hope that we have succeeded by giving you the full details and information. To follow all our news, you can subscribe to the alerts system or to one of our different systems to provide you with all that is new.