The demolition of Mina Plaza towers enters the Guinness Book of... 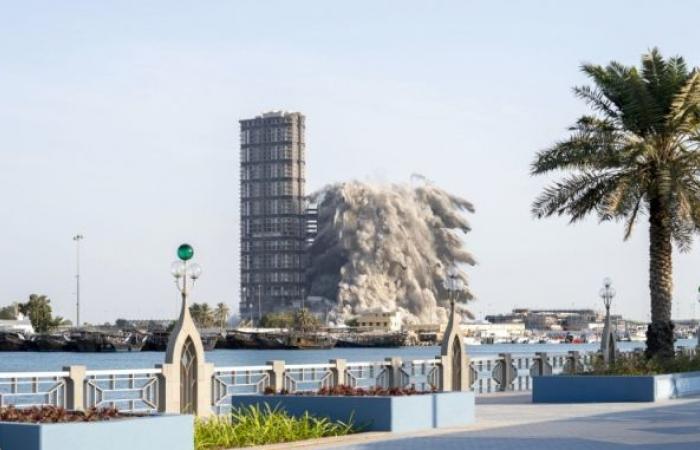 Modon Real Estate Company yesterday set a new record in the Guinness Book of Records by demolishing the tallest building, which is 165 meters high, following the success of an operation with explosives for Mina Plaza towers in the Mina Zayed area in Abu Dhabi in cooperation with the most prominent companies in the field of building demolition.

Port Plaza towers consist of four individually designed high-rise buildings that were built on a seven-story platform and during the operation a total of 144 floors were demolished with non-primary stationary explosives placed in 18,000 holes inside the structures.

For his part, Ahmed Al Sheikh Al Zaabi, Director of Implementation Department at Modon Real Estate Company, said, “We are proud to achieve a record number recorded in the Guinness Book of Records to document the ability of the Emirate of Abu Dhabi to implement mega projects by following the highest standards of security and safety, and it is recorded as the tallest building to be demolished using explosives.

He added that this success represents a motivation for us to exert more efforts towards completing the development work, as one of the developers responsible for rehabilitating the main areas in the Zayed Port area.

He pointed out that the demolition of “Port Plaza Towers” constitutes an important strategic stage in the progress of work in the region, and affirms our determination and our partners’ determination to embody the vision of our wise leadership of the urban development scene of the capital and make it one of the most attractive destinations in the world.

As the world body responsible for documenting records, Danny Hickson, official arbitrator at Guinness World Records, said, “I am pleased to witness this thoughtful demolition and admit that it is the largest of its kind.

He added: This tremendous achievement heralds a new stage for the development of Abu Dhabi’s waterfront and opens the way for new urban landmarks and designs, noting that the demolition of a building of this size and scope requires the work of specialists and people with high skills that many do not possess and I would like to congratulate all those who participated in this task on their professional and safe work.

These were the details of the news The demolition of Mina Plaza towers enters the Guinness Book of... for this day. We hope that we have succeeded by giving you the full details and information. To follow all our news, you can subscribe to the alerts system or to one of our different systems to provide you with all that is new.