The body of the legendary Maradona was transferred to the palace... 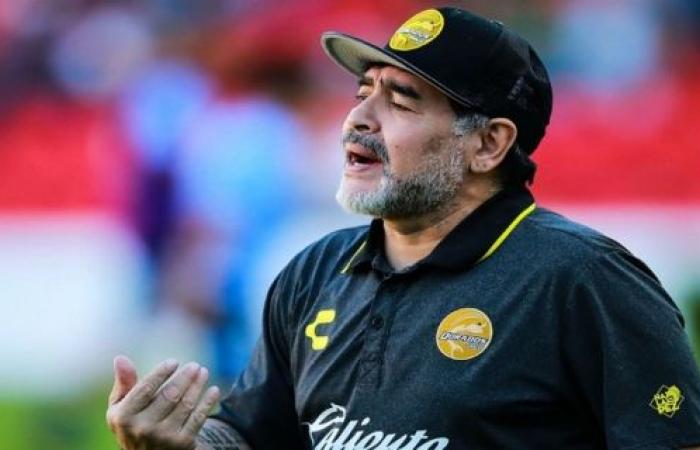 Diego Maradona’s last words before his death were: “I feel sick.” Then he said goodbye to the world yesterday, at the age of 60, with a heart attack at his home, only two weeks after he was discharged from the hospital, after undergoing surgery to treat a stroke, and revealed that his body was transferred to The palace of the Argentine President, Casa Rosada, in the city of Olivos on Thursday morning, and his desire to write on his grave the phrase: “Thank you for the ball.””

Maradona won the World Cup with Argentina in 1986, after he toppled England in the quarter-finals with a notorious goal and a second goal, called the “Goal of the Century”. The Argentine legend was famous for his amazing playing abilities and a notorious life off the field..

On the morning of his death, Maradona went down to breakfast, looked pale and complained of feeling cold, and told his nephew that he was feeling ill, before returning to bed in a rented mansion in which he lived in the San Andres area north of the Argentine capital Buenos Aires, and moved to him after leaving the hospital after surgery On November 11, shortly before noon yesterday, Maradona’s nurse called by phone to seek medical help, after suffering a heart attack, but he died before the arrival of the paramedics, and then Argentine President Alberto Fernandez announced the mourning for three days.

Thousands of mourners poured into the streets of Buenos Aires and Naples in Italy, and some carried a banner with a drawing of the legend’s face, and his mother Dalma Salvadora Franco, in honor of Maradona, at a time when stadiums across Europe fell silent before confrontations in the Champions League yesterday evening, and Argentine media showed The last hours of the short life of the former Napoli and Barcelona star in the Argentine media.

While the soccer player’s family has not made any official comment yet, Maradona has 5 children, including his two daughters Delma (33 years old) and Ganina (31 years old), from his only wife Claudia Villavan (58 years), whom he married from 1984 to 2004, and his son Younger Diego Fernando, from his girlfriend Veronica Ojeda in 2013, and has only recognized his son Diego Junior (34 years old) and daughter Jana (23 years old) in the past five years..

And in Via Devoto, in Buenos Aires, where Maradona grew up, his former neighbors put Argentine flags on their balconies, while broadcast calls from his World Cup goals echoed from loudspeakers, and a 60-year-old woman remembers that the late star was running away from his childhood home. In Villa Fiorito, where a group of fans gathered to exchange tales, she said, “This was a poor area when Maradona lived here, and the streets were full of rocks, but he never forgot his roots,” recalls a man sitting in the stands at the stadium, where Maradona appeared for the first time when He was 15 years old with the Argentine youth national team on October 20 1976, and he said, “He was a star, and the truth is that football is dead.”“.

Speaking outside San Andres, where the body of the retired soccer player was taken to a nearby morgue to find out the cause of death, Chief Prosecutor John Broade said: “Diego Armando Maradona died around 12 noon local time, and the forensic police began their work at 4 pm.” No signs of any crime or violence have been revealed, and an autopsy is underway to determine the cause of death beyond any doubt, but we can say at this stage that everything points to natural causes“.

The “Daily Mail” newspaper indicated that Maradona’s body is scheduled to be transported to the palace of the Argentine President, Casa Rosada, in Olivos on Thursday morning, to allow some fans to take a final farewell look, while Maradona, who has reached the age of sixty only, explained Last October 30th, the message he wants inscribed on his tombstone, while he was still alive.

The football legend gave this amazing confession in a strange television interview 15 years ago, in which he revealed that getting old with his grandchildren would mean a peaceful death for him, and he responded to a question about what he would say in the cemetery to the football legend, saying: “Thank God for playing football, because The sport that gave me the utmost happiness and freedom, as if I touched the sky with my hand, and I would write on the grave (Thank you for the ball)“.

These were the details of the news The body of the legendary Maradona was transferred to the palace... for this day. We hope that we have succeeded by giving you the full details and information. To follow all our news, you can subscribe to the alerts system or to one of our different systems to provide you with all that is new.