everything known about the death of a customer at Carrefour 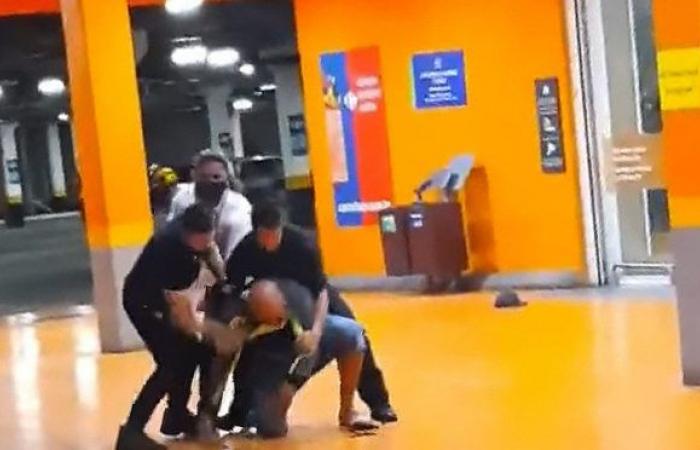 The death of João Alberto Freitas, a 40-year-old black man, in a store at the Carrefour supermarket in Porto Alegre, last Thursday (19) – the eve of Black Awareness Day – sparked protests across the country and reverberated even out of Brazil. In the capital of Rio Grande do Sul, in São Paulo, Brasília, Curitiba and Rio de Janeiro protesters protested – in some cases with violence – demanding justice for the murder of Beto, as the victim was known.

See, in 7 points, everything you need to know to understand the case:

1. How did João Alberto die?

Images from the security cameras at the Carrefour store in Porto Alegre, obtained by Fantastic, from TV Globo, show that he was beaten by two security guards at the supermarket for at least four minutes. After the attacks started, a third store employee participated in the attacks.

In that time, the victim was beaten with punches to the head and abdomen. Then, one of the security guards choked Beto with his knee, until the victim stopped moving. Medical report held by the Civil Police points out that the cause of death was asphyxiation.

2. What triggered the aggressions?

Before the beating, according to the police, João Alberto had fallen out with a supermarket employee inside the store, while shopping with his wife, Milena Borges Alves. The employee then called security, and he was ushered out of the supermarket.

On the way out to the parking lot, the victim punched one of the security guards. After that, the two employees started to attack Beto with kicks and punches and, then, immobilized him. It was with the victim already on the ground that security guards threw punches to the head and abdomen.

3. Who are the security guards who assaulted the man to death?

The two security guards involved in the murder are Giovane Gaspar da Silva, 24; and Magno Braz Borges, 30 years old. Giovani was a temporary military policeman and, according to the Federal Police, had no national registration to act as a security guard.

Both are employees of a third-party company, Vector Segurança.

4. Were there other people present at the time of the beating of João Alberto?

Images obtained by the Folha de S. Paulo newspaper show that the beating was witnessed by at least 15 people – among them other supermarket employees. A man at the scene tried to help the victim, but store inspector Adriana Alves Dutra removed him and called two more security guards.

In another section, Adriana appears intimidating people who were filming the action. “Do not do that [filmar] that I’m going to burn you in the store ”, says the inspector to one of the witnesses.

The images also show that Beto’s wife, Milena, tried to prevent the attacks, but was removed by three uniformed men.

5. What happened to the two security guards responsible for the beating?

Giovane Gaspar da Silva and Magno Braz Borges were arrested in the act. On Friday (20), they had preventive custody decreed. The two were also fired for cause.

According to the delegate responsible for the case, Roberta Bertoldo, the Civil Police works to identify other people who may have contributed to the crime, even by default.

“Any kind of disagreement, whatever it may be, would never be justified in order to carry out such violence as that which occurred during this action, of these security guards, in that supermarket,” said Bertoldo. The Civil Police does not treat the case as an episode of racism.

6. What did Carrefour and the security company say about the case?

On Friday (20), when the case came up, Carrefour and security company Vector released press releases lamenting the death of Beto Freitas. See the two placements:

Carrefour informs that it will adopt the appropriate measures to hold those involved in this criminal act responsible. It will also break the contract with the company that is responsible for the security guards who committed the aggression. The employee who was in charge of the store at the time of the incident will be terminated. Out of respect for the victim, the store will be closed. We will contact Mr. João Alberto’s family to provide the necessary support.

Carrefour deeply regrets the case. Upon learning of this inexplicable episode, we initiated a rigorous internal investigation and immediately took the appropriate steps for those responsible to be legally punished. For us, no type of violence and intolerance is permissible, and we do not accept situations like these to happen. We are deeply dismayed by everything that happened and will follow the developments of the case, offering all support to the local authorities.

The Vector Group, through its lawyer, comes to the public to report that it deeply regrets the events that took place on the night of 11/19/2020, is sensitive to the victim’s family and does not tolerate any type of violence, especially those resulting from intolerance and discrimination. .

It informs that all its employees receive adequate training inherent to their activities, especially regarding the practice of respect for diversity, human dignity, legal guarantees, freedom of thought, political ideology, as well as racial and ethnic diversity.

The company has already started the procedures for internal investigation of the facts and will take the appropriate measures, being at the disposal of the authorities and collaborating with the investigations to investigate the truth.

7. Who was João Alberto?

João Alberto Freitas was black, was 40 years old, had four children and a granddaughter. The relationship with Milena was her second marriage. Before that, he had had a relationship with Marilene Santos Manuel, with whom he had three children.

The marriage ended after almost 20 years, and had episodes of domestic violence. For his assaults on his partner, João Alberto was arrested twice, under the Maria da Penha Law.

Beto’s body was buried on Saturday morning (21) in Porto Alegre.

These were the details of the news everything known about the death of a customer at Carrefour for this day. We hope that we have succeeded by giving you the full details and information. To follow all our news, you can subscribe to the alerts system or to one of our different systems to provide you with all that is new.