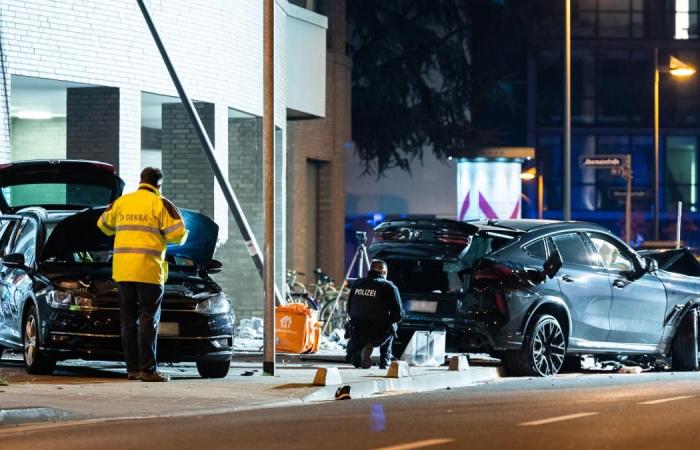 Dhe cause of the fatal collision of a sports vehicle (SUV) with several people in Frankfurt was, according to the police, “very likely” excessive speed. Both an illegal car race and an assassination attempt should be ruled out as a reason, said a police spokesman on Sunday.

An expert is investigating the case, a police spokesman said on Sunday morning. Witnesses are wanted.

In the accident on Saturday afternoon, the SUV had come off the road in a curve and crashed into a house wall. According to the police, three people were seriously injured on the sidewalk. They came to hospitals where a 62-year-old pedestrian from the Ostalb district in Baden-Württemberg and a younger bicycle courier died. The state of a seriously injured 31-year-old woman from Frankfurt has stabilized, said the spokesman.

The driver is said to be a 38-year-old man from the Main metropolis. He was not seriously injured and was taken to a police station to clarify his personal details and to record his testimony.

After a similar accident in Berlin in 2019, a debate about the dangers of heavy sports off-road vehicles (SUV) broke out. At that time, one of these vehicles ran off the road in the center of the capital and fatally injured four pedestrians, including a three-year-old boy.

*The article has been translated based on the content of Source link by https://www.welt.de/vermischtes/article220721072/Frankfurt-Toedlicher-SUV-Unfall-Fahrer-war-vermutlich-zu-schnell.html
. If there is any problem regarding the content, copyright, please leave a report below the article. We will try to process as quickly as possible to protect the rights of the author. Thank you very much!

These were the details of the news Frankfurt: fatal SUV accident – driver was probably too fast for this day. We hope that we have succeeded by giving you the full details and information. To follow all our news, you can subscribe to the alerts system or to one of our different systems to provide you with all that is new.