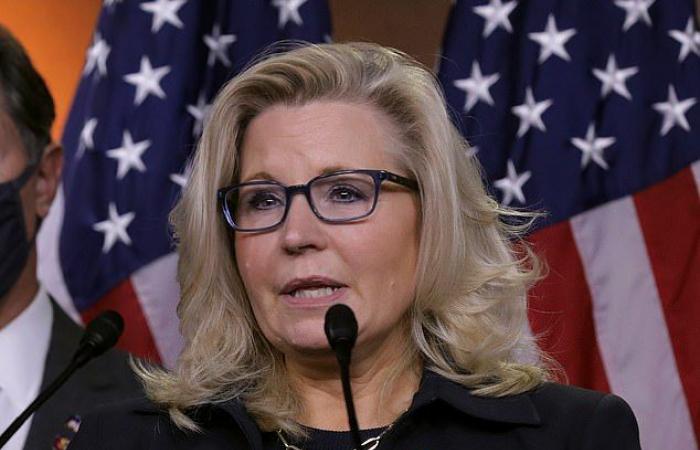 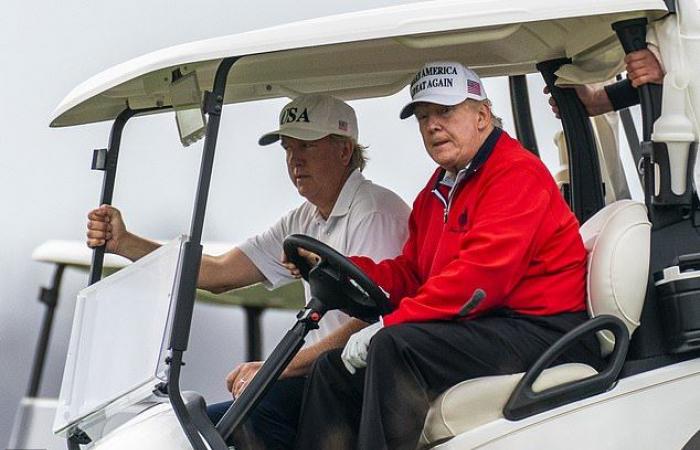 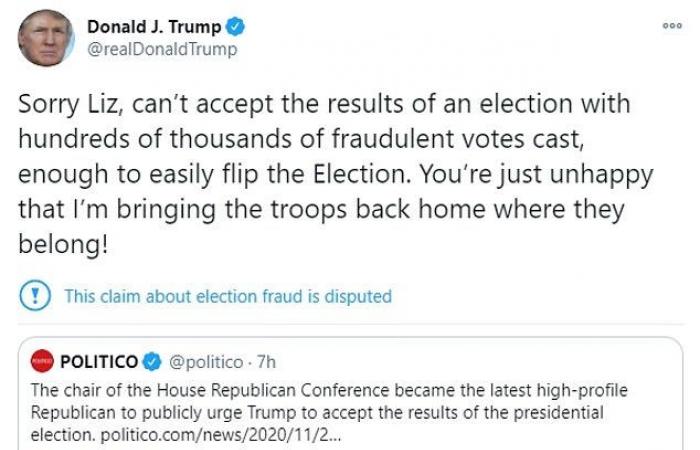 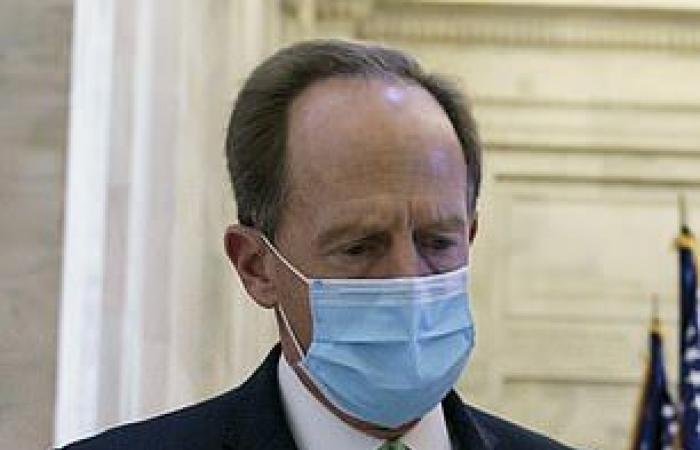 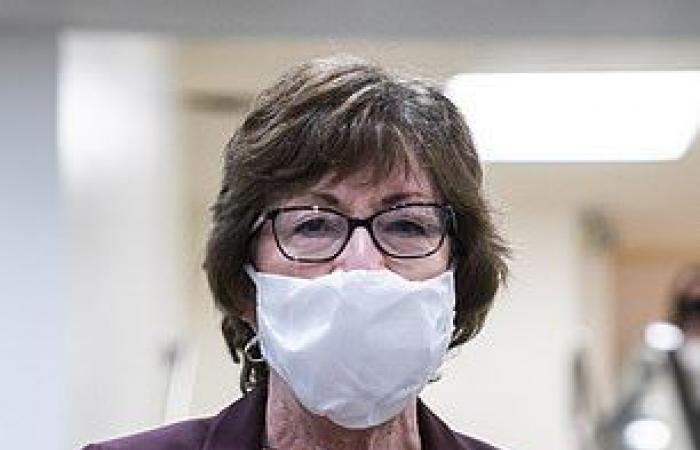 Wyoming Representative Liz Cheney has joined a growing number of Republicans in pressuring President Donald Trump to concede the election to Joe Biden as his campaign continues its fight to prove voter fraud.

The Speaker of the House Republican Conference urged Trump to respect “the sanctity of our electoral process” if he is unable to provide evidence to support his fraud claims in a Friday statement.

“America is governed by the rule of law. The president and his lawyers have made allegations of widespread crime and fraud, which they believe could impact election results, ”said Cheney, the third House Republican.

“If they have genuine proof of this, they are obligated to present it immediately to the court and to the American people.

“If the President cannot prove these claims or demonstrate that they would change the outcome of the election, he should fulfill his oath to preserve, protect and defend the Constitution of the United States by respecting the sanctity of our electoral process. “

Cheney’s statement marked a break with other senior House Republicans, including Minority Leader Kevin McCarthy, who has backed Trump as he continues to push his baseless claim that he won the election.

Trump replied to Cheney in a tweet on Saturday, writing, “Sorry Liz, cannot accept election results with hundreds of thousands of fraudulent votes, enough to easily reverse the election.

“You’re just unhappy that I’m bringing the troops back to their place!”

Wyoming Representative Liz Cheney, Speaker of the Republican House Conference, urged President Donald Trump to respect “the sanctity of our electoral process” if he is unable to prove his allegations of electoral fraud in a press release. Friday. Since Biden was declared the winner two weeks ago, Trump (pictured on his golf course in Virginia on Saturday) has launched a barrage of lawsuits and mounted a lobbying campaign to prevent states from certifying their vote totals. 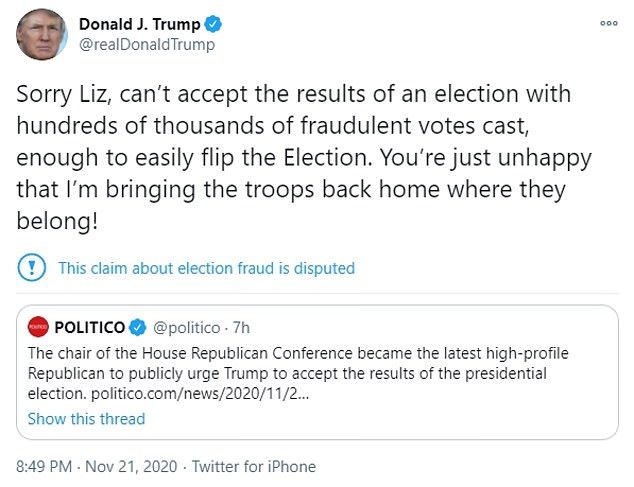 Trump replied to Cheney in a tweet on Saturday, writing, “Sorry Liz, cannot accept election results with hundreds of thousands of fraudulent votes, enough to easily reverse the election. “You’re just unhappy that I’m bringing the troops back to their place!”

Since Biden was declared the winner two weeks ago, Trump has launched a barrage of lawsuits and mounted a campaign of pressure to prevent states from certifying their vote totals.

So far, attempts to thwart the certification have failed in courts in Georgia, Michigan, and Arizona.

For Trump to have the slightest hope of staying in the White House, he must eliminate Biden’s 81,000-vote lead in Pennsylvania. The state must begin certifying its results on Monday.

Trump’s lawyers have promised a quick appeal, but lawyers who opposed him in court say he is out of time.

“This should put the nail in the coffin of any further attempt by President Trump to use federal courts to rewrite the 2020 election result,” said Kristen Clarke, chair of the Lawyers’ Committee for Civil Rights Under Law.

Some of Trump’s Republican colleagues in Congress – like Cheney – are now breaking ranks.

Republican Senator Pat Toomey said the decision blocked any chance of legal victory in Pennsylvania and called on Trump to concede the election.

Senator Susan Collins (R – Maine) also spoke out against the president on Friday, saying he was damaging the transition process by refusing to concede.

“There is a right and a wrong way to gather evidence and mount legal challenges in our courts,” Collins said.

“The wrong way is to try to pressure state election officials. It undermines public confidence in our election results without evidence or court rulings to back up the claims. 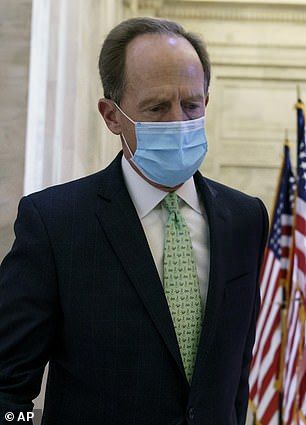 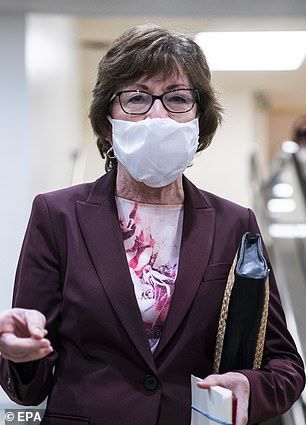 Biden won six million more votes than Trump in the Nov. 3 election and also prevailed 306-232 in the state-by-state electoral college system that determines who will be sworn in on Jan.20, 2021.

He has spent the past few weeks preparing to take office, although the Trump administration has refused to provide funds and security clearances to do so.

Critics say Trump’s refusal to concede has serious implications for national security and the fight against the coronavirus, which has killed nearly 255,000 Americans.

To stay in power, Trump would have to somehow overrule election results in at least three major states – a feat unprecedented in U.S. history.

A recount in Georgia only confirmed Biden’s victory there, and officials certified the result on Friday. Trump’s campaign said on Saturday night it would demand another recount.

As recounts and prosecutions come close, Trump is now pressuring Republican-led state legislatures to nullify the vote totals and declare him the winner.

“Hopefully the courts and / or legislatures will have… the COURAGE to do what needs to be done to maintain the integrity of our elections and the United States of America itself,” he wrote on Twitter. after the Pennsylvania decision.

On Friday, he summoned two senior Republicans from the Michigan legislature to the White House. After the meeting, they said they saw no evidence that would lead them to intervene. Biden leads Trump to Michigan by 154,000 votes.

Election officials across the country say there is no evidence of significant electoral fraud, and Trump’s own administration has called the election “the safest in American history.”

But Trump’s accusations continued to inflame his tough Republican base.

Half of Republicans believe the election was stolen from Trump, according to a Reuters / Ipsos poll, and supporters have held rallies across the country to protest the result.

These were the details of the news Liz Cheney tells Trump to concede defeat if he is unable... for this day. We hope that we have succeeded by giving you the full details and information. To follow all our news, you can subscribe to the alerts system or to one of our different systems to provide you with all that is new.