Speaking at the G20, Bolsonaro criticizes protests against racism across the... 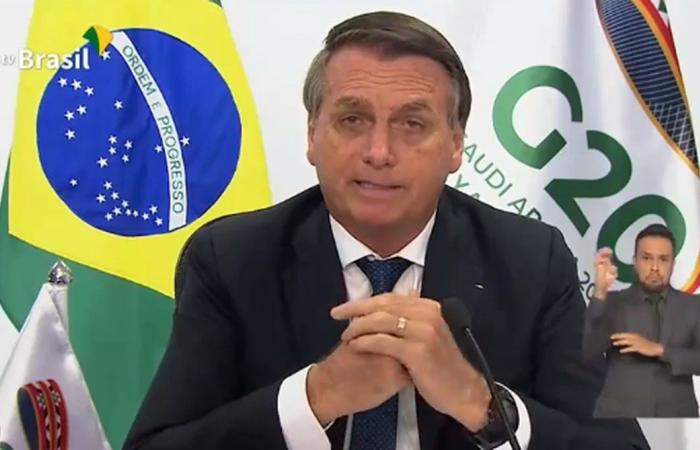 Faced with the leaders of the world’s largest economic powers, Bolsonaro also reiterated his defense of reform of the World Trade Organization (WTO) and the non-mandatory vaccination against the covid-19.

Before going into the topics discussed at the meeting, Bolsonaro stated that he would need to make an introduction on guaranteeing the “defense of the Brazilian national character”, on the occasion of the protests held since Friday (20).

“Brazil has a diverse culture, unique among nations. We are a mixed race, ”he said. “It was the essence of these people that won the world’s sympathy. However, there are those who want to destroy it, and put conflict, resentment, hatred and division between races in their place, always masked as a ‘struggle for equality’ or ‘social justice’. Everything in search of power ”.

In a speech similar to what he had published on social networks at the end of last night, Bolsonaro said that he defends a “sovereign and united” people.

“As a man and as a president, I see everyone with the same colors: green and yellow! There is no better skin color than the others. What exist are good men and bad men; and it is our choices and values ​​that will determine which of us we will be. Those who instigate the people to discord, fabricating and promoting conflicts, attack not only the nation, but our own history ”, he added.

In the sequence, Bolsonaro recalled the commitment established among the G20 leaders, at the beginning of the pandemic, to maintain trade flows and global production chains. For the Brazilian president, although “far from ideal”, the initiatives were successful.

Bolsonaro also guaranteed that Brazil is aligned with international efforts in the search for effective and safe vaccines against covid-19 and adopts early treatment to fight the disease.

“We support universal, equitable and affordable access to available treatments. It is for this purpose that we participate in different initiatives aimed at combating the disease ”, he explained. “However, it is necessary to emphasize that we also defend the freedom of each individual to decide whether or not to get the vaccine. The pandemic cannot serve as a justification for attacks on individual freedoms. ”

In highlighting the main measures in the economic area adopted internally by his government, such as emergency aid and transfers to states and municipalities, Bolsonaro said that the injection of resources by the main economies of the world contributed to “ensure the proper liquidity of the markets and provide fiscal relief to the most vulnerable countries ”.

In line with what he had already said this week at a Brics meeting, Bolsonaro promised to carry out internal structural reforms and demanded changes in the World Trade Organization.

“The reform of the WTO, which was necessary before the pandemic, is now a key element for the recovery of the world economy. Brazil advocates progress on the three pillars of the WTO: negotiations; dispute settlement; and monitoring and transparency, ”he said. “We also hope that the Appellate Body will be able to return to full operation as soon as possible.”

Bolsonaro again argued that the WTO needs to equate the ambition of reducing subsidies for agricultural goods to the promotion of trade in industrial goods. The reform needs, according to the president, to stimulate investments and create fair and balanced conditions for international trade, not only in goods, but also in services.

“For this reason, I propose that our ministers debate and share best practices on how to deal with this issue, avoiding falling into the trap of subsidies and policies that distort international trade,” concluded the president.

The G20 summit, organized this year by Saudi Arabia, is taking place for the first time in a virtual way, due to the pandemic. President Jair Bolsonaro is also expected to participate in other stages of the meeting tomorrow.

These were the details of the news Speaking at the G20, Bolsonaro criticizes protests against racism across the... for this day. We hope that we have succeeded by giving you the full details and information. To follow all our news, you can subscribe to the alerts system or to one of our different systems to provide you with all that is new.