Six hours of video conference: G20 summit: Much is likely to fail because of Trump 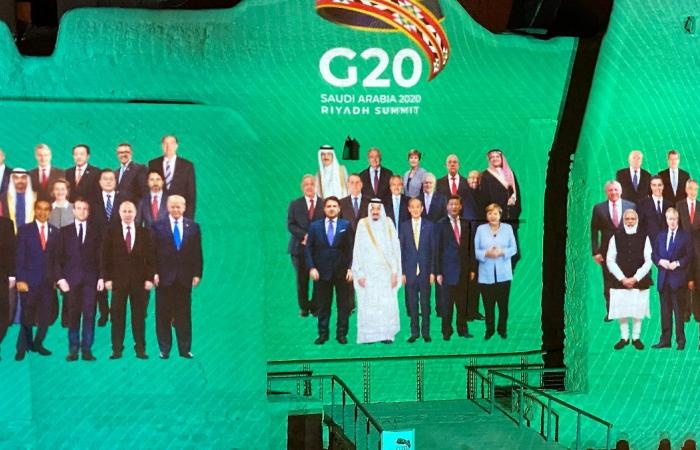 The corona pandemic hits almost every country on earth. The world is having a hard time with a global answer. The G20 summit is an attempt to change that. Without the USA, however, the leading industrial nations will hardly make any progress.

Dealing with the corona pandemic is the central topic of the G20 summit of leading economic powers, which begins this Saturday as a video conference led by Saudi Arabia. Chancellor Angela Merkel, Chinese President Xi Jinping, Russian President Vladimir Putin and probably one last time Donald Trump will take part in the two-day deliberations. The elected US president, who will remain in office until January 20, will play a key role at the two-day conference. It is not only a brake on the containment of the pandemic, but also on the second top topic of the summit: the fight against global warming.

The summit was supposed to be a major event with thousands of guests in the Saudi Arabian capital Riyadh. The pandemic thwarted the royal family’s bill. Now the heads of state and government only confer about six hours on video. The otherwise so important conversations in private or in a small circle on the fringes are eliminated. Nevertheless, there are some expectations of the G20, especially when it comes to Corona. It’s all about this:

Fighting pandemics: vaccine for everyone

Just in time for the summit, there has been a series of encouraging news about the approval of corona vaccines. Chancellor Merkel hopes that it could be in December or shortly after the turn of the year. One of the issues at the summit will be how the distribution is then designed. UN Secretary General António Guterres campaigned once again on Friday for the international Covax initiative, which aims to make vaccines available and affordable for everyone. “I urge all G20 members to become members of Covax,” he said. Federal Finance Minister Olaf Scholz made a similar statement: “It is necessary that all G20 countries participate.” More than 150 countries have already joined the Covax initiative, including China, but not the USA. Germany has already contributed 100 million euros. However, the German delegation announced that there would be no further financial commitments at the G20 summit. Covax will need $ 11 billion by the end of 2021.

At the summit, the European Union wants to campaign for further debt relief for the poorest countries in the world. “We are convinced that more debt relief is needed,” said EU Council President Charles Michel before the summit. This is intended to cushion the consequences of the corona pandemic. The development organizations One and Oxfam pointed out before the summit that more than 200 million people were also at risk of sliding into extreme poverty as a result of the Corona crisis. At their virtual meeting in October 2020, the finance ministers and central bank governors of the G20 decided to extend the debt moratorium until June 2021. A decision on a further extension should be made by spring at the latest.

Climate protection: Nothing works without the USA

The G20 has found it particularly difficult to deal with this issue in recent years. The reason was the withdrawal of US President Trump from the Paris UN climate agreement to reduce greenhouse gases. The issue turned the G20 into a G19 plus 1. It is unlikely that Trump will change his stance in any way at what will probably be his last summit. So much progress is not to be expected here.

Then there is another topic that will be present at the summit, but one that will hardly be discussed: the human rights situation in the host country Saudi Arabia. The kingdom has come under massive criticism, among other things, for the murder of the journalist Jamal Khashoggi, who is critical of the government in the Istanbul Consulate General, for the death penalty, the restriction of freedom of expression and the imprisonment of activists. Members of the Bundestag from the Greens, the FDP, the Left, but also from the ruling party SPD, asked Merkel before the summit to make a clear statement on this. In the big group, however, it will hardly come to that. The German delegation said there were other ways to address this issue.

These were the details of the news Six hours of video conference: G20 summit: Much is likely to fail because of Trump for this day. We hope that we have succeeded by giving you the full details and information. To follow all our news, you can subscribe to the alerts system or to one of our different systems to provide you with all that is new.