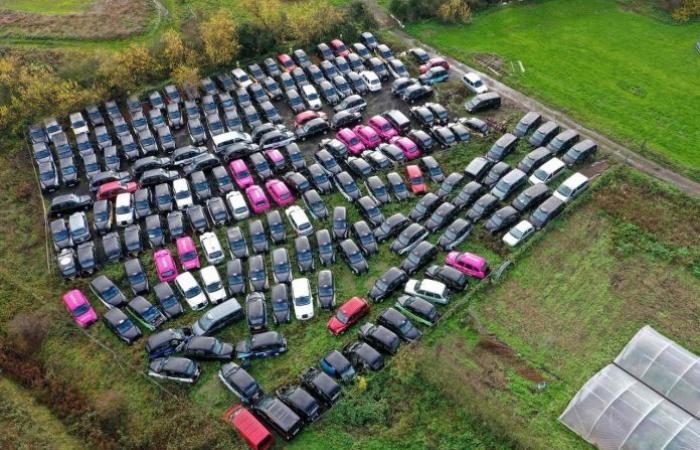 © AFP/Will EDWARDS
Epping (UK), November 19. Overwhelmed by the influx of returned taxis, rental companies are forced to store them in fields.

The image is striking… Hundreds of “cabs”, legendary London taxis, abandoned in fields on the outskirts of the British capital.

These iconic domed taxis, originally designed to accommodate passengers wearing top hats, are no longer successful in times of pandemic. In a city center emptied of its inhabitants by a second confinement, the drivers cannot find customers to load for a race. And most have chosen to return their rental taxi. Overwhelmed by the influx of returns, the rental companies found themselves forced to store them in fields near London.

“I’ve lost count of the number of vehicles we have here,” laments Tony Georgiou, the manager of GB Taxis Limited, which usually rents the famous cars to licensed drivers. “There must be between 150 and 200 cars that have been withdrawn from circulation.”

“It happens everywhere, all around the M25 (major road around London, editor’s note), there are fields full of cabs like that “, confirms to AFP Steve McNamara, secretary general of the Association of licensed taxi drivers (LTDA), for whom this” completely new “situation is untenable for some.

Tony Georginou says about 50 of his vehicles have already had parts stolen, which will cost 120,000 pounds to replace. “I don’t know if we’re going to be okay,” he explains of his business that opened 16 years ago.

Successors of the London horse-drawn taxis that appeared in the 17th century, black “cabs” are an emblem of British life, just like red telephone boxes and helmeted police officers. “The only ones left are taxis now,” says McNamara. But for how long ?

READ ALSO> Covid-19 vaccine: will we be ready?

Currently, only 20% of taxis drive, he says, basing himself on the cars of his association – which has 11,000, or more than half of the 20,000 in the city – and the official figures provided by the London Heathrow Airport.

“We have lost 5,000 to 6,000 vehicles since June,” he says, because while some drivers do odd jobs like deliveries to supermarkets, the “vast majority” no longer work.

For Steve McNamara, the new coronavirus is “without a doubt the main factor” responsible for the drop in the number of taxis, and not applications like Uber.

Asked by AFP, London transport (TfL) claim that the number of licensed taxis fell from 19,000 vehicles on March 1 to just under 15,000 on November 8.

The subject has become political, with officials being moved by the fate of taxis and attacking the mayor of London. “Sadiq Khan, you did not help our emblematic cabs”, denounced the elected Susan Hall on Twitter.

“The most difficult period I have ever known”

At Heathrow Airport, previously the busiest in Europe, Sam Houston is stepping in. He usually waits 3 hours to have a run, but that goes up to 8 p.m., or even a day, in times of coronavirus. The 45-year-old driver, who has been working for 8 years, explains that in normal times this profession is “a good livelihood”. But the pandemic represents “the most difficult period I have ever known,” he says.

His colleagues tried to get help from the short-time working system for the self-employed, but many did not fit the boxes, he said. “We want targeted government support for our sector,” he claims, joined by Steve McNamara, according to whom drivers are struggling to get by financially while many have recently invested in electric taxis or payment machines .

He calls for specific financial assistance similar to what has been done for the restoration, claiming to have “been hit as hard – if not more – than this sector”.

These were the details of the news hundreds of abandoned London taxis in fields for this day. We hope that we have succeeded by giving you the full details and information. To follow all our news, you can subscribe to the alerts system or to one of our different systems to provide you with all that is new.