Rudy Giuliani: How Donald Trump’s lawyer makes himself a joke 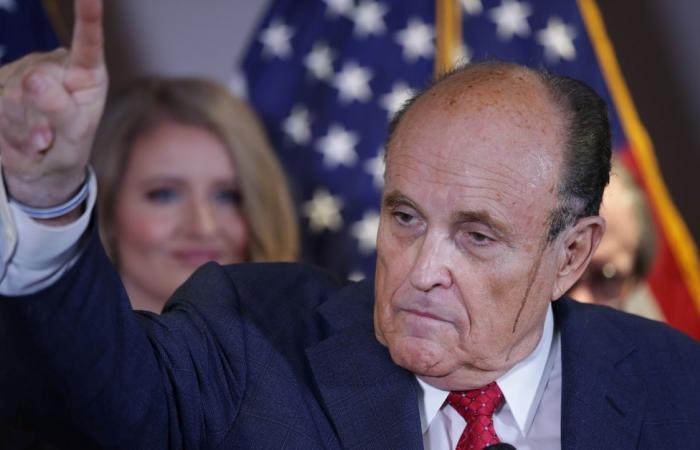 The madness of the whole action would also open up if Rudy Giuliani had turned off the microphone and not a word of what he was saying. On Thursday, the former New York mayor is standing in a small press room in Washington, with reporters from the capital’s media crowding in front of him.

Before the lawyer goes to the microphone, two members of the Trump team quickly hug each other in front of the cameras; Giuliani himself doesn’t even think about wearing a mask. It’s only been a day since the United States reported the 250,000. Corona dead. Giuliani and his people however pretend that the pandemic only exists in the imagination of crazy leftists.

Probably the ability to deny reality is exactly what the president likes about his lawyer. Donald Trump lost the presidential election, there is no doubt about that. Joe Biden leads with a lead of over five million votes, he has recaptured the decisive swing states in the north of the United States, which won Trump in 2016. Half the world has now congratulated Biden on his victory, from Angela Merkel to the Pope.

But behind Giuliani there is a sign that reads: »Several paths to victory« – including those states in red that Trump supposedly can still win. In the course of his speech, the sweating Trump attorney ran dark paint over the temples, apparently it was hair dye. You can imagine the reactions on social media.

What Giuliani says is reminiscent of the Iraqi Minister of Information Mohammed Saeed al-Sahaf, who in 2003 shortly before the victory of the American troops in Iraq declared: “Baghdad is safe. Hundreds of unbelievers commit suicide at the gates of the city. ”For what Giuliani says is just as credible as the words of Saddam Hussein’s chief propagandist, who went down in history as“ Comical Ali ”. The president’s lawyer said there was massive evidence that the November 3rd election was cheated. He claims that Republican inspectors have been systematically prevented from doing their job. He says, “This is not a single case of electoral fraud in a state.” Rather, everything speaks for the fact that there was a sophisticated plan to steal Trump’s victory.

Lots of claims – no evidence

The only problem is: Giuliani still lacks solid evidence for his theory this afternoon. Donald Trump doesn’t have to worry about that. The president’s strategy is simple. He’s working on the myth that an unscrupulous Democratic party cheated him out of winning the election – and that unfaithful Republicans then rammed the knife in his back. That has nothing to do with reality. But that is meaningless as long as enough US citizens believe the lie. And that seems to be the case: almost 70 percent of Republican voters now say they are worried that the election has been rigged.

The question is why is Giuliani playing this dirty game. He was once a man with a reputation to lose. Giuliani was New York City Mayor for eight years. He drove back crime in the city and managed to restore courage and confidence to the New Yorkers after the attacks of September 11, 2001. The myth of Giuliani grew out of the ruins of the World Trade Center, and he became the world’s most famous mayor, “America’s Mayor”. Time magazine took him on the cover; the British Queen knighted him.

After his time as mayor, he turns his fame into money. He took $ 100,000 per speech and founded a consulting firm at the same time. Giuliani was not squeamish when choosing his customers. He served Purdue, the pharmaceutical company that made big bucks on addictive pain relievers. But Giuliani was soon drawn back into the spotlight. In 2007 he ran for the Republican presidential candidacy, but the project failed miserably. Joe Biden blasphemed at the time that Giuliani basically only knew one sentence: “Noun – Verb – 9/11”. In fact, Giuliani had put his reaction to 9/11 at the center of his campaign. That was not enough by far.

Giuliani has no official position in the White House

Trump was the opportunity for Giuliani to step onto the big stage again. He was already defending his old friend from New York during the election campaign, even when everyone else disliked it. “Men just talk like that,” said Giuliani on television when a sound recording was released in the fall of 2016 in which Trump boasted that he would hold women in the crotch without being asked. In the White House, Giuliani becomes a mixture of consigliere and hammer for Trump. Officially, he has no function – but that makes it all the easier to do the dirty jobs.

In the Ukraine affair, it is Giuliani who makes the completely unfounded claim that Joe Biden fired an attorney general in Kiev to do his son Hunter a favor. And shortly before the election on November 3, Giuliani supplied a New York tabloid with dirty stories about the candidate’s son that no serious medium wants to touch.

The scene in the “Borat” movie is embarrassing – but not surprising

But the rubbish that Giuliani spreads rubs off on himself. “America’s Mayor” becomes a character. When the comedian and filmmaker Sacha Baron Cohen released his new “Borat” film in the fall, in which Giuliani was first interviewed by a young woman and then lured into the bedroom by the – fake – reporter (“Shall we have a drink in the bedroom? «), the mockery is great – but nobody is surprised at Giuliani. Because the image of the sleazy lawyer patting young women on the buttocks corresponds exactly to the image that most Americans have of Giuliani in their heads.

Seen in this way, he has nothing to lose anyway. The 76-year-old is fighting his last fight with Trump. As with the president, Giuliani is in danger of going to jail if Joe Biden should take power in Washington. For many months Giuliani has been sitting on the back of the New York prosecutor for whom he once worked.

In addition, Giuliani is paying for his loyalty to Trump well: Allegedly, he wants to charge the president’s team a rate that is as serious as his work as a lawyer: $ 20,000 a day.

These were the details of the news Rudy Giuliani: How Donald Trump’s lawyer makes himself a joke for this day. We hope that we have succeeded by giving you the full details and information. To follow all our news, you can subscribe to the alerts system or to one of our different systems to provide you with all that is new.