A space triangle in the sky of Saudi Arabia is being... 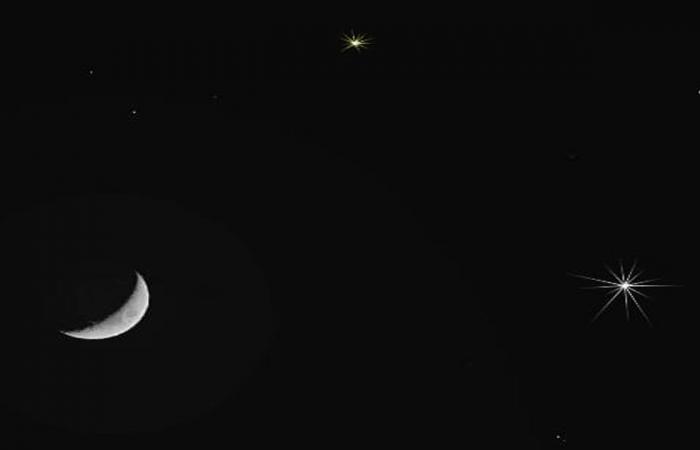 The Astronomical Society in Jeddah clarified that in Saudi Arabia and the Arab world, after sunset on Thursday evening (November 19) and the beginning of the night, the passage of the crescent moon will be apparently observed near the planets of Jupiter and Saturn, and they will be arranged together in a triangle towards the southern horizon, easily seen with the naked eye.

The chief astronomer of Jeddah, Eng. Majed Abu Zahra, said, on the Society’s Facebook page, that Jupiter is brighter than Saturn, so Jupiter is the fourth brightest object in the dome of the sky after the sun, moon and Venus, and it will appear as a bright white point for the observer with the naked eye and upon observing it through binoculars or a small telescope, he will see The disk of the planet and around its four large moons known as “Galileo Moons”, namely: “Janmid, Callisto, Europa, Iowa.” They appear as small points of light near Jupiter.

Abu Zahra added that Saturn will appear to the naked eye as a faint golden point of light, and through a small telescope, its rings, which reached their farthest tilt towards the Earth in October 2017, and its northern side at its peak in clarity, was the last time it observed that inclination in 1988 and its next vision will be in the year 2046.

The chief astronomer of Jeddah said that during the night hours, all these objects appear to move to the west as a result of the Earth’s rotation around its axis, but the true movement of the moon is towards the east with respect to the stars.

He added that by observing the position of the moon at the same time every day, he notices that its movement is towards the east with respect to the stars and planets in the zodiac, so the next day he will notice that the moon has moved away from Jupiter and Saturn is pushing towards the east, which is its natural movement in its orbit around the Earth.

The chief astronomer of Jeddah pointed out that at the present time Jupiter and Saturn are separated by 4 degrees from each other, and day after day Jupiter is getting closer and closer to Saturn, ostensibly at the dome of the sky, until they meet in a rare conjunction in the second half of next December.

These were the details of the news A space triangle in the sky of Saudi Arabia is being... for this day. We hope that we have succeeded by giving you the full details and information. To follow all our news, you can subscribe to the alerts system or to one of our different systems to provide you with all that is new.