Historical sentence against the women’s torture center in the Pinochet dictatorship... 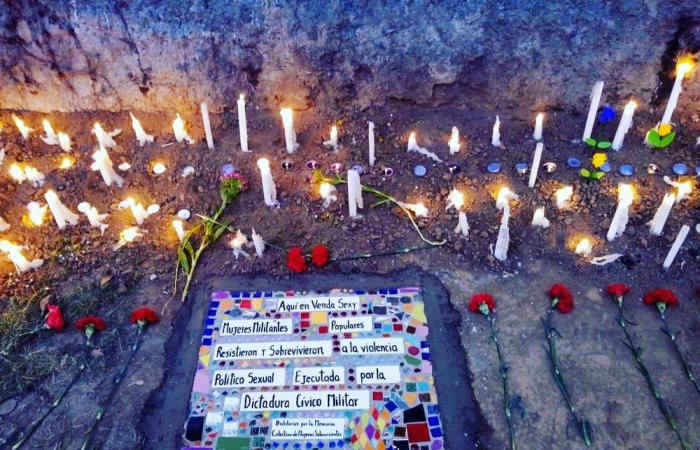 Beatriz Bataszew was terrified when she heard what was going on in the Venda Sexy basement. Hours earlier, on September 12, 1974, she had been detained by agents of the National Intelligence Directorate (DINA), the secret police of Augusto Pinochet’s dictatorship, who transferred her to that clandestine center housed in a two-story house on a middle-class sector of the Macul commune in Santiago de Chile.

The origin of the name Venda Sexy is recorded in the first Report of the National Commission on Political Prison and Torture – better known as the Valech report. There it was established that it was part of the jargon of DINA agents and was related to their favorite method of torture: sexual abuse, especially of women, who during their stay in the house were naked and blindfolded.

For Beatriz Bataszew, a student of forestry engineering and a member of the Revolutionary Left Movement (MIR), she spent five days in the basements of the house, naked, blindfolded, without contact with the outside and subjected to several interrogations in which she was tortured, assaulted and sexually abused. The place was also known as the disco: a record player was turned on at full volume to hide the horror.

What happened in Venda Sexy, says Beatriz, was completely outside of what she and other militants of leftist movements imagined about the repression, in the midst of the harshest years of the dictatorship. One of the first warnings of what she was going to live came when she heard the story of Marta Neira, of whom they would lose all trace and would add to the list of the more than 1,210 prisoners who had disappeared by the regime: “She returned from the basement and reported in desperation, disconcerted, that she had been raped by the dog. This was terrible for us who had not yet had that experience, because when she told me I thought it would happen to me, and it did happen ”.

The rapes were perpetrated by the DINA agents themselves and in particular by a woman: Ingrid Olderock, a descendant of Germans, with ideas related to Nazism, who became known in the secret police through her dog Volodia, of the German shepherd breed and trained to commit the abuses. “It was not just sexual violence, it was political sexual violence, which aimed to domesticate us, discipline us and particularly punish us, because we were women who were fighting decisively against the dictatorship”, says Beatriz Bataszew, remembering what she lived for almost half a century.

Her case is part of an unprecedented decision by the Chilean Justice that incorporated a gender perspective when sentencing former DINA agents Raúl Iturriaga Neumann, Manuel Rivas and Hugo Hernández to 15 years in prison for kidnapping and using torture with violence. sexual against Beatriz and five other women: Cristina Godoy, Laura Ramsay, Beatriz Bataszew, Sara de Witt, Alejandra Holzapfel and Clivia Sotomayor; in addition to four men who were victims of kidnapping and torture between 1974 and 1975, in Venda Sexy.

The particularity of Judge Mario Carroza’s decision lies in the fact that the abuses committed during interrogations were considered “a specific form of violence against women”, in line with international standards. “In the study of what happened in the said clandestine detention facility, the agents did not limit themselves only to kidnapping men and women, with the purpose of locking them up and extracting information from them, under torture, which in the case of women, due to their nature and severity , had an impact on them that marked their future life ”, explains Carroza to EL PAÍS.

For the judge, what the women experienced inside that house “were dehumanized, degrading and abusive circumstances”, which should be understood as a different criminal figure and “making these circumstances evident”. With the prison sentences of the ex-agents, Carroza ordered the State of Chile to pay an indemnity of 80 million Chilean pesos (about 560,000 reais), for moral damages, to each of the plaintiffs. The sentence is final.

For Beatriz Bataszew, the sentence “has an important value, but it has limitations, among the main ones the fact that it is not considered the political element of that violence. This means that those who committed the acts are tried, but not those who orchestrated this instrument of state terrorism. In other words, political authority is not judged ”. “There is progress in the sense that progress is actually being made, but we do not consider justice to be an act carried out almost half a century later. If justice is not opportune, it is not justice ”, he says.

As for the lawyer Camila Maturana Kesten, of the Corporación Humanas, a feminist organization that provides legal support to victims of human rights violations, “it is of the utmost importance that the Chilean Judiciary recognizes and highlights the particularity of the repression by State agents in Venda Sexy , pointing out that, in addition to inflicting serious physical and psychological suffering on the abducted people, massive and systematic sexual violence was committed, particularly against women ”.

These were the details of the news Historical sentence against the women’s torture center in the Pinochet dictatorship... for this day. We hope that we have succeeded by giving you the full details and information. To follow all our news, you can subscribe to the alerts system or to one of our different systems to provide you with all that is new.