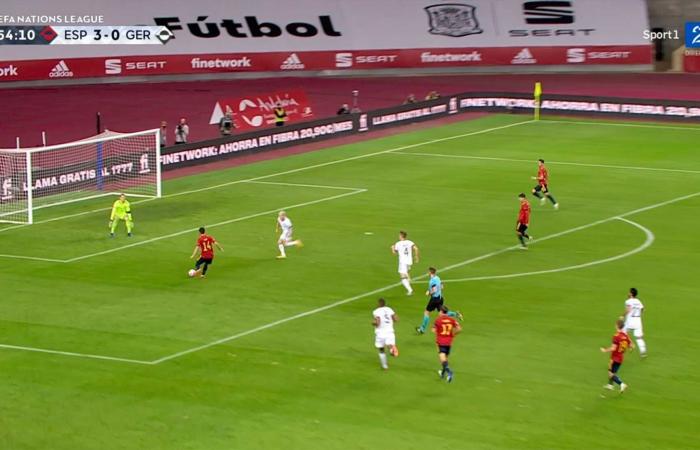 One has to go all the way back to 1931 to find a similar loss. Then Germany lost 0-6 against Austria at home in Berlin. Besides whether it is a 0-9 loss to the English amateur national team in 1909, the Germans’ fourth national team match in history, the only German loss that is worse in history.

After going undefeated through 2020, few people believed that similar figures would become a reality for Joachim Löw and his men. Away against Spain, however, the German team was nowhere near getting the point needed to win the group in the Nations League. Instead, they were regularly played around by an energetic Spanish team, led by Manchester City’s summer signing Ferrán Torres.

The 20-year-old did not give up until he had sent three balls into the net behind Manuel Neuer, and with a goal each from Álvaro Morata, Mikel Oyarzabal and Rodri, the scoreboard finally showed 6-0 to the home team in Sevilla.

– It is probably not the bitterest loss in my career, but clearly the biggest. That hurt. We did not get hold of them him. Spain showed us how to attack, says German midfielder Toni Kroos after the match according to UEFA.

GERMAN MANNEFALL: There was a loss for the history books for Germany on Tuesday night.

It did not start perfectly for the Spaniards. Already after five minutes, they shouted for a penalty kick, but Swedish Andreas Ekberg thought the offense happened a few small centimeters outside the 16-meter.

After ten minutes, injured Sergio Canales took the count and went to the thigh. Fabián Ruiz came running down the stairs and it did not take long before the substitute made his mark.

After a short tussle with the defender, Álvaro Morata finally tucked the ball home.

Morata put the ball back in goal seven minutes later, but the offside flag came up for what was a very marginal decision. As so often before for Morata, who according to

has had 13 goals canceled for offside this year. He especially made a name for himself when he had three goals canceled out for offside in the same match in the Champions League three weeks ago. In comparison, he now has 11 approved goals in 2020.

Spain continued the big game, at the same time as the German national team made more and more mistakes. Ferrán Torres picked up the ball when Dani Olmo headed in the crossbar after 34 minutes and knocked the ball into the goal. Four minutes later, another striking corner kick came from Ruiz, this time nicely headed in goal by Rodri.

With 3-0 at the break, Spain had full control of the victory, and thus also the group victory in the Nations League. A small sliver of joy was then that captain Sergio Ramos had to go out with an injury just before the break, but that did not dampen the pace of the Spaniards in the second half.

After a couple of good counterattacks, the fourth goal came after 55 minutes. José Gayà played free and scored Ferrán Torres on an open goal. But the Spaniards did not give up there. Substitute Ruiz served his third goal after 72 minutes, when Torres scored his third goal with a wonderful shot from 16 meters.

Mikel Oyarzabal went on to 6-0 just before the end, and thus ensured the worst German loss in 89 years.

These were the details of the news Largest German loss since 1931 for this day. We hope that we have succeeded by giving you the full details and information. To follow all our news, you can subscribe to the alerts system or to one of our different systems to provide you with all that is new.