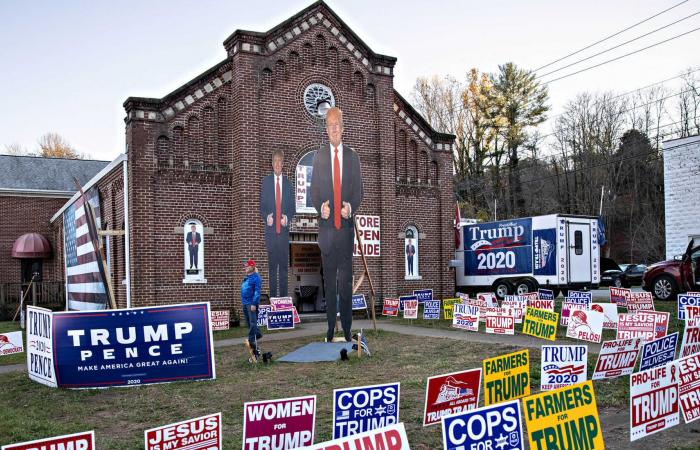 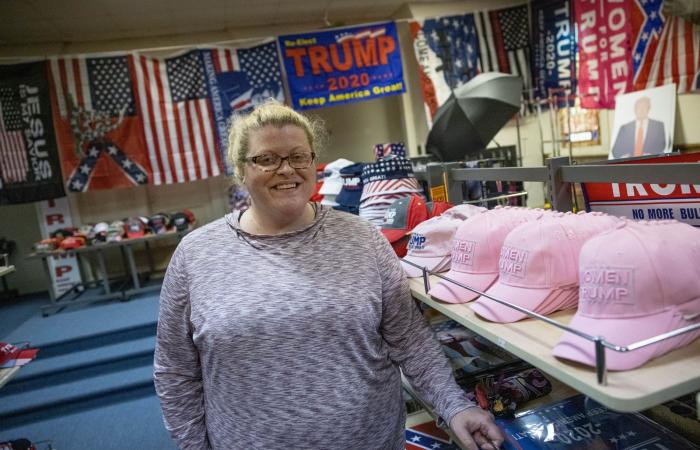 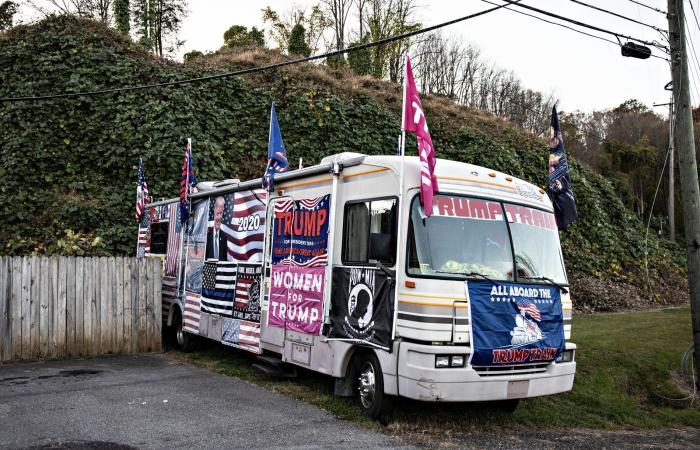 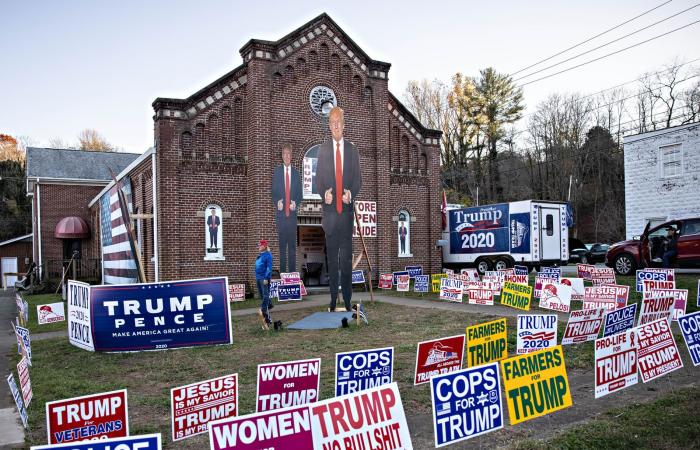 BOONES MILL, VIRGINIA (VG) Whitey Taylor has never been in doubt that he will continue to run the store with Trump products. In his eyes, the choice is far from decided yet.

There’s really no reason for anyone from outside to decide to take the trip to Boones Mill. The town consists more or less of a strip of shops on each side of the road: a gas station, a couple of fryers and a funeral home.

Nevertheless, merchant “Whitey” Taylor experiences that people make pilgrimages from other parts of the country precisely to his business. That’s because he has what he claims is America’s largest selection of Donald Trump products.

Whitey, as everyone calls him, just as well bought the village’s empty church, filling it with Trump T-shirts, cups, beer mugs and umbrellas from ceiling to floor.

Two four-meter-high cardboard figures of the president and Whitey himself, well placed in a good chair in the open church door, welcome us.

– I have been to 36 states and 56 election meetings with Trump. I’ve talked to him three times, it comes from the white-haired man.

Running a sale of supporter effects to a president who lost the election is perhaps not such a good deal ?, asks VG.

– Absolutely not, on the contrary. People came in droves before the election, and keep coming. This has not been decided, the store owner assures.

The final distribution of voters is not clear, but Biden has so far secured 290 against Trumps 214, in an election where 270 are needed to win. Republicans dispute the result, and Trump claims that there was widespread electoral fraud, but this is rejected by the US National Electoral Commission, those responsible in each state and foreign election observers.

Trump has said he will hold new rallies where he will talk about his lawsuits, Fox News and the political website Axios claim.

In Boones Mill, they have heard about these plans and are ready to mobilize.

Inside the Trump “church”, VG meets Christie Droze (37). Tears gather in the corner of her eye as soon as she talks about the president they have had for the past four years.

– I have been so emotional this week. I can hardly talk about it, because I’m so sorry about it. Of course, I will support him and his family for as long as I live. He is a true American, not a politician. He truly loves the United States with all his heart, the woman says, wiping her cheeks.

– How has the United States changed under Trump?

– He has taken care of the small people, the farmers, people in small towns, the police, we who have always felt forgotten. He goes out to the small towns and takes you by the hand, gives you a hug and makes everyone feel that he cares about their problems, no matter how small they may be. That’s how I feel, the woman says, glancing at the row of shelves with beer mugs and shot glasses.

– I forget about talking, I should buy something, she laughs.

Refuses to take over

The time after Election Day on November 3 has been the only long parade of events we have not seen before in American politics. Senate Republican Leader Mitch McConnell said Monday that President Trump has a “100 percent” right to question election results and consider legal options.

Renowned Kentucky Senator Lindsey Graham has also called on the president to “fight hard” and “not acknowledge defeat.” The Trump administration has so far refused to sign the document that starts the transition process to a new president, CNN was able to reveal on Monday, so the Americans are still living in limbo between two leaders, and know little about when they will receive an answer.

Christie Droze hurts with the uncertainty, and feels with Trump.

– I mean, Trump did not need to become president. He had an enchanting and rich life, he had not had to give up all this to expose himself to so much lack of respect these four years. Had I been him, I would never have run for office again, but he does, because he loves the true America and their people. That says a lot about him, she thinks.

Meanwhile, Trump continues to rule as we have seen for the past four years. This week, he fired Secretary of Defense Mark Esper and several other Pentagon leaders. Esper resisted pressure from the White House to deploy federal troops to crack down on protesters during the riots in the United States this summer, and relations between him and Trump have been poor ever since. Trump has also indicated he will fire the country’s infection control expert Anthony Fauci.

This is proof that “President Trump intends to spend his last days in office creating chaos in our American democracy,” said House Speaker Nancy Pelosi.

Between Trump caps, commemorative coins, socks and sandals, store owner Whitey stands firmly with his hands on his hips, and is not worried.

– They will be pressured through an electoral reform. The guy he just kicked had something to do with this. Now heads are starting to roll on those who have not done their job, he believes.

– My first signature shirt was “Donald J. Trump, finally someone with balls”. I’m going to make new shirts that say “my president has balls,” okay?

– It is divided, yes: It is evil against good. It is completely biblical. The Bible talks about the goats that go to the left and the sheep to the right, and that’s where we are. They want to promote everything that is wicked: Homosexuality, abortion, and then they want to talk about the young girls and that they want to give them a future, but they kill them, they do not give them a future. But it works out. All of this is about fulfilling the Bible, the word of God, true, Whitey says.

He can not imagine that a Democrat can be his president, even if Biden wants to try.

But should it be four years with the Democrats, he has at least bought a sign with “Trump 2024”.

– Of course, his son will be quiet in 2024, no matter what. Trump will continue to rule the country, he will stand behind it and control until he dies. It’s going to work out, because he’s the only man in the United States whose name can be sold on the side of the highway.

These were the details of the news People come in large numbers – VG for this day. We hope that we have succeeded by giving you the full details and information. To follow all our news, you can subscribe to the alerts system or to one of our different systems to provide you with all that is new. 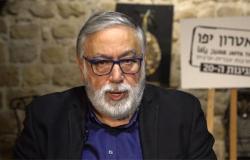