In Naples, overwhelmed by the Covid, a patient died in the... 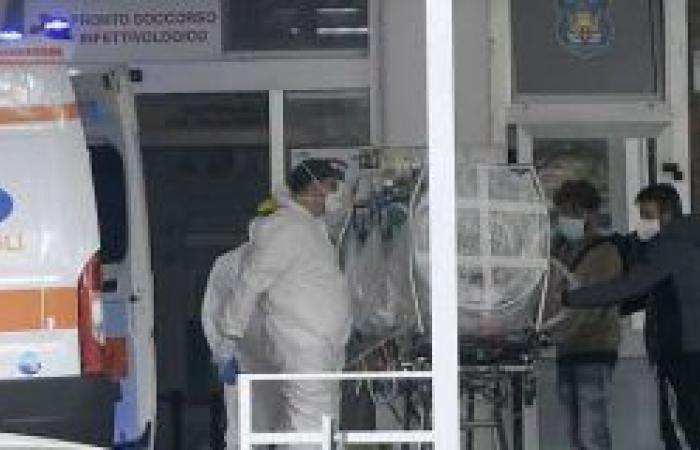 “See Naples and die” says a famous saying. Giuseppe Cantalupo, 84, illustrated it to perfection. Naples, not only he saw it, but he was born there, he lived there and he died there, on the afternoon of November 11, in a toilet of the Caldarelli hospital. Sick of the Covid and waiting to be taken care of, he could not have known that it would cause one of the biggest health scandals in the Peninsula, which made the headlines of newspapers and televisions, invaded social networks. The video of his corpse lying on the tiled toilet has toured Italy.

It is a 30-year-old patient, also waiting for 24 hours for hospitalization, who filmed and posted her on social networks. The scene quickly became the tragic symbol of the health situation in Naples and Campania, first classified as a “yellow zone” (almost normal), now on the verge of moving into a “red zone”. To complete the picture, films were also seen showing the corridors of the hospital crowded with patients awaiting treatment, some lying on the floor on improvised stretchers. The announcement on November 13 afternoon by local pharmacies of a worrying lack of oxygen bombs was the ultimate bad news. Naples has become the culmination of an increasingly degraded Italian pandemic situation.

Is France the worst student in Europe in the face of Covid-19?

Giuseppe Cantalupo was in more than poor health, had diabetes, high blood pressure and had an abdominal aneurysm. The autopsy will soon tell what caused the cardiac arrest that took him to the Caldarelli Hospital restroom. His daughter Annamaria is leaning towards a heart attack. Caldarelli director Giuseppe Longo ruled out any responsibility for his services in the death. The investigation by the Naples Public Prosecutor’s Office will decide.

The open war, partially linked to the Covid, between the mayor Luigi De Magistris, left populist at the end of his mandate, and the governor of Campania, Vincenzo De Luca, barely re-elected under the label of the Democratic Party, also focuses all Italian media on Naples. Nicknamed “the sheriff”, the latter categorically refuses to take responsibility for the 927 deaths since the start of the pandemic and the 4,000 new daily cases in the region. For him, the members of the government are “jackals”. Faced with his request for “600 additional doctors and 800 nurses”, they sent… 7 anesthetists. The peninsular press will have been concentrated once again on this South, called “Meridione”, which does not seem, in its eyes, hardly capable of facing its disasters.

Italy, the first country in Europe hit by the pandemic of the new coronavirus last spring, has exceeded one million cases since the start of the epidemic, according to figures released last Wednesday by the Ministry of Health. The country has recorded 32,961 new cases and 623 deaths in the past 24 hours, bringing the total since February to 1,028,424 cases and 42,953 deaths.

Italy has been one of the hardest hit European countries, particularly the northern regions which have recorded more than two-thirds of cases, while the southern regions have been relatively spared so far.

After the summer respite, the spread of Covid-19 has started to rise again since September and regions and government have had to take restrictive measures limiting mobility and work.

Faced with the rapid growth in the number of new cases and hospitalizations which threaten the intensive care units with saturation, doctors and experts are calling for a general reconfinement.

Video: Coronavirus: “The peak of the epidemic is in front of us”, says Jérôme Salomon (Dailymotion)

Prime Minister Giuseppe Conte said on Wednesday that the government was not yet resigning. The executive, he stressed in an interview with the daily “La Stampa”, wants “Avoid the closure of the entire national territory”.

Return to the emergency room of the Antonio Caldarelli hospital in Naples, where Marianna, 65, interviewed by Franceinfo has been waiting for three hours for the results of a Covid test. « This is the most important hospital in southern Italy. But look, it’s a real nightmare. Look how organized they are, it’s scary. It’s really madness ”, insists Marianna.

“This video highlights the countless lies told and repeated about health in Campania. We are afraid, we are calling for help ”, launched the priest Don Maurizio Patriciello, known for his commitment to improving the medical network in his region.

Another video. And the scene is impressive, says “the Parisian”. It illustrates the lack of resources of Italian hospitals in the face of the increase in the number of Covid-19 cases. At Cotugno Hospital in Naples, patients waiting for a place in the hospital are treated even before entering the premises.

“We are doing the impossible by helping the sick inside cars and ambulances”, Maurizio Di Mauro, general manager of the hospital, told the Italian newspaper “Il Fatto Quotidiano”. “The staff are making superhuman efforts, but we are at the limit. “

Forcing the French to be vaccinated against Covid? “It could have a disastrous effect”

“Campania is on its knees”

Overwhelmed hospitals, patients treated in their cars or dying in ambulances: Naples and its region, Campania, hard hit by the new wave of Covid-19, could pass Friday in ” Red zone “ and end up under a bell.

“Campania is on its knees”, Luigi Di Maio, the Italian foreign minister from the region, was alarmed in an interview on Friday in the daily “La Stampa”.

Campania accounts for around 10% of the 30,000 to 40,000 new cases currently recorded every day in the Peninsula, which corresponds more or less to its weight in the national demography.

But its health system is notoriously, chronically, failing, and the situation is now dramatic in Naples, its hot capital dominating the Mediterranean, with lines of cars in front of the emergency room and nurses distributing oxygen in a parking lot …

“We are almost out of beds available”, notes Rodolfo Punzi, head of the infectious diseases department at Cotugno Hospital, met within its walls by the AFPTV.

“Unfortunately, the disease requires long hospital stays and that is why there is a low turnover rate. The emergencies suffer from this low turnover and fill up with people who must be hospitalized but also people who could be treated at home ”, adds Rodolfo Punzi.

According to a study published by the Ministry of Health at the beginning of the year, just before the outbreak of the epidemic, Campania is the penultimate Italian region in terms of the quality of care offered, ahead of Calabria.

These were the details of the news In Naples, overwhelmed by the Covid, a patient died in the... for this day. We hope that we have succeeded by giving you the full details and information. To follow all our news, you can subscribe to the alerts system or to one of our different systems to provide you with all that is new.