Central America waits underwater for the arrival of a new tropical... 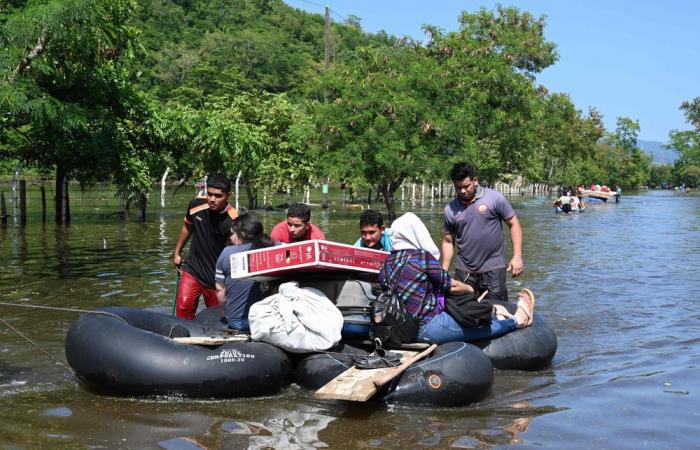 Central America lives these days pending the sky due to the arrival of the storm Lota, while the mud continues to move and making a damage count after the passage of Eta. This cyclone has left 261 deaths in six countries of the region and 20% of the population of Honduras with nothing to put in their mouths or a roof to protect themselves from the arrival of more water, according to the International Red Cross.

The trail of destruction doesn’t even end. To the hundreds of thousands of displaced people, there are 58 dead in Honduras, another 44 dead and 99 missing in Guatemala, and at least two other deaths in Nicaragua. While the population waits for the overflowing rivers to descend to finish the damage count, the governments of the Northern Triangle of Central America have made a desperate appeal for help to the international community. The effects have also been noted in El Salvador, Costa Rica and Panama, where hundreds of thousands of displaced people are counted.

Eta hit the Caribbean coast of Central America hard last week, arriving as a Category 4 hurricane. It subsequently degraded to a tropical storm, but strong wind and falling water for several days in a row caused flooding and landslides. In Guatemala there are towns that, directly, were declared ‘holy ground’ due to the impossibility of initiating a rescue with guarantees. Other municipalities in the departments of Alta and Baja Verapaz or Izabal in Guatemala or Valle de Sula in Honduras were devastated and thousands of people were relocated to shelters.

According to the first reports in Honduras, 1.7 million people, 20% of the country’s population, have lost all their possessions. The Permanent Contingency Commission (Copeco) confirmed that 45,000 people were sheltered in more than 400 temporary shelters set up by the Government of Juan Orlando Hernández, whose management has been highly criticized due to the inability to respond to the phenomenon. In the worst hit areas, “citizen commandos” have been activated to bring food to the victims.

Although there are 58 deaths so far, Copeco expects that bodies will continue to appear, mainly in the department of Cortés, in northern Honduras, another of the areas affected.

According to Santiago Luengo, Red Cross aid coordinator, the usual complications to access the area, one of the poorest on the continent, are compounded by difficulties for evacuation and the effects of covid-19. In many cases, helicopters are being used, since the boats cannot get there because of the mud and stones. In addition, it is difficult to maintain social distancing measures against the virus in shelters. “The Sula Valley is the area most affected by the cyclone in Honduras, but here the highest covid rates in the country were already registered before,” Luengo said from San Pedro Sula.

“This is a large-scale disaster. The problem now is trying to bring water and health services to an area where dengue outbreaks are beginning. Now we are preparing for the arrival of a new storm, but also for the a later stage of reconstruction in a region where the main coffee and banana crops that feed people have been lost, ”Luengo explained to EL PAÍS.

In Guatemala, so far there are 44 deaths and almost 100 missing. The landslides have left dozens of people underground and the search and rescue efforts have been frustrating. “We calculate that between the deceased and the disappeared, the unofficial figures show us more or less 150 deaths,” said President Alejandro Giammattei at a press conference. The main avalanche occurred in the indigenous village of Quejá, in the northern municipality of San Cristóbal Verapaz. More than a hundred houses were buried and some 2,500 people from that indigenous Mayan area lost their belongings due to the landslides.

The National Coordinator for Disaster Reduction (Conred) ensures that at least 4,102 people remain at risk from the rains, because they are in areas prone to more landslides. Eta leaves 343,038 people affected directly and indirectly in Guatemala, according to official data. La Conred has estimated that there are almost 17,000 homes affected, 108 stretches of roads damaged and nine roads destroyed, as well as 246 schools with problems. The floods caused by Eta also destroyed 16 bridges and left severe damage to 34 others. Giammattei said Monday that the support of who he says is a “friend of Guatemala” will be vital at this time. Especially for the “more than 25,000 families who lost everything,” warned the president.

For its part, in Nicaragua, the Caribbean has not yet finished rising. The Wawa Bar community was wiped off the map and its community members are desperate as they lose their plots, livestock and poultry animals. In the city of Bilwi, departmental capital, three shelters are full and the victims want to return to their homes due to the lack of food.

In Nicaragua, 71,000 people were evacuated, 47,000 needed shelter, 47,690 were left without drinking water, 1,800 houses were destroyed, 24,600 were left without electricity and 900 kilometers of roads were cut, according to the Red Cross. The humanitarian organization compared what happened to Hurricane Mitch, which devastated the region in 1998, and pointed out that about three million dollars are needed for emergency tasks.

The Inter-American Development Bank (IDB), the World Bank and the Central American Bank for Economic Integration (CABEI) pledged to help. In a joint statement released on Tuesday, the multilateral banks indicated that their commitment will materialize in a “short, medium and long-term action plan” to finance humanitarian aid and reconstruction tasks. “We are going to give the countries affected by Eta all the necessary support so that they can quickly assist the affected families, repair the damage and, which is very important in the medium term, rebuild better,” promised the World Bank Vice President to Latin America, Carlos Felipe Jaramillo.

These were the details of the news Central America waits underwater for the arrival of a new tropical... for this day. We hope that we have succeeded by giving you the full details and information. To follow all our news, you can subscribe to the alerts system or to one of our different systems to provide you with all that is new.