The video of a dead person in the hospital bathroom shows... 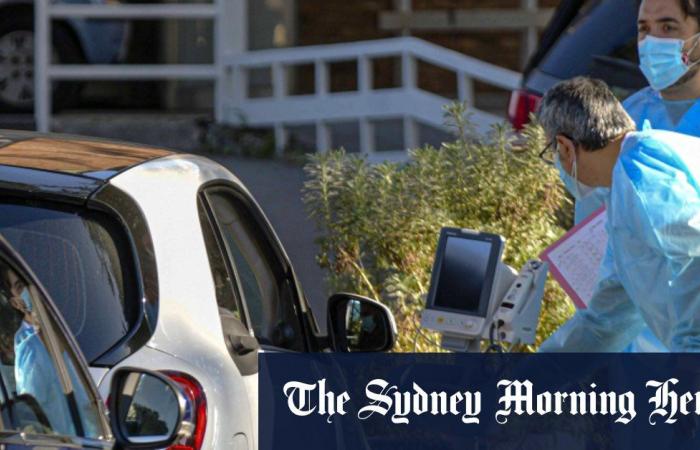 Officials said Campania reflected a larger health disaster that was unfolding across much of southern Italy and emerged largely unscathed from the initial wave of COVID-19 that mainly hit the north. But it is hammered by the second wave.

The number of cases across the country passed the one million mark this week – with half of these infections only occurring in the last 19 days. The number of deaths is 42,953 – the sixth highest number in the world.

Hospitals across the country have struggled to cope with the skyrocketing COVID-19 numbers, but the poorer South appeared particularly ill-equipped to deal with it, despite having had all summer to strengthen its defenses.

The sick in Naples have been given oxygen and drip through their car windows while waiting hours for COVID-19 tests or being hospitalized. Further south, on the island of Sicily, the mayor of Palermo warned his region on Monday of an “inevitable massacre” when infections arose there.

“The north has always had a well-equipped health system that was spread across the entire area. The situation there may not be optimal, but the south is a wasteland by comparison, ”said Carlo Palermo, head of the ANAAO-ASSOMED medical union Reuters.

Signs of hope in Germany, France, but virus strains in hospitals

The surge in new coronavirus cases appears to be slowing in Germany and France, raising hopes that the two European heavyweights will regain control of the pandemic. But authorities said Thursday, local time, the hospitals are overcrowded and likely to face further stress in the coming weeks.

Countries across Europe have taken more or less drastic lockdown measures in the past few weeks to contain a resurgence of the pandemic. Numerous confirmed cases have set records. They have largely overtaxed the efforts to trace contacts in Germany as well, as the first cases of the pandemic were treated well and they are still in better shape than most of the neighbors.

The German health minister urged his compatriots to prepare for a long winter, regardless of whether a partial shutdown succeeds in reducing the number of cases.

“That doesn’t mean that things can really get going again from December or January and that we can hold wedding celebrations or Christmas parties as if nothing were going to happen – that won’t work,” Jens Spahn told RBB Inforadio.

On Thursday, the Robert Koch Institute, Germany’s national disease control center, announced that 21,866 new cases have been recorded in the nation of 83 million in the past 24 hours. That’s less than a record of 23,399 on Saturday, but almost 2,000 more than a week earlier.

Neighboring France, which has confirmed more infections than any other European country since the pandemic began, is two weeks after a tougher month-long lockdown with most adults staying in their homes for up to an hour a day, despite schools still open are.

French Prime Minister Jean Castex was due to announce later on Thursday that authorities would regain control of the virus.

A doctor who advised the French government, Antoine Flahault, said on BFM television that “after two weeks of lockdown, the epidemic is coming back under control. We no longer see this exponential curve ”.

However, doctors warn that hospitals continue to be overcrowded and urge the public to follow lockdown measures. A helicopter transported patients from saturated hospitals in the Lyon region to the eastern city of Strasbourg on Thursday.

COVID-related deaths also continue to rise, and authorities say more people with the virus died in French nursing homes so far in November than in the previous five months.

Few people are currently traveling with the growing fear of viruses and the new round of European restrictions. Nevertheless, the German airline Lufthansa has started a test program to ensure health on board and encourage more people to fly.

All passengers on a domestic Munich-Hamburg flight on Thursday morning completed a so-called antigen test and were only allowed to board after the quick results showed that they were negative for the corona virus. Passengers were not billed for the test, but should arrive an hour early to have time for the results.

Lufthansa did not immediately have details of how many passengers were on the first flight.

Receive our Coronavirus Update Newsletter on the most important developments of the day and the numbers you need to know. Register for Der Sydney Morning Herald Newsletter here and Age Here.

These were the details of the news The video of a dead person in the hospital bathroom shows... for this day. We hope that we have succeeded by giving you the full details and information. To follow all our news, you can subscribe to the alerts system or to one of our different systems to provide you with all that is new.