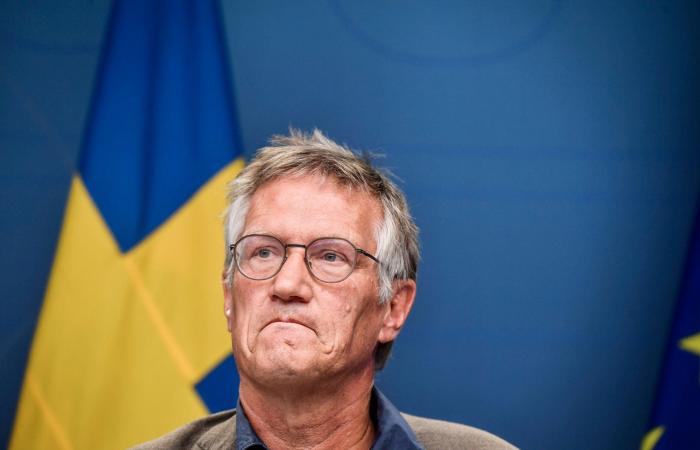 Sweden’s state epidemiologist Anders Tegnell believed that many would be immune to the next corona wave. It has turned out to be a disc boom.

A new corona crisis hits Sweden. The growth in hospital admissions is growing faster than anywhere else in Europe, and criticism of Anders Tegnell is growing stronger.

– So far, Sweden’s strategy has proved to be a dramatic failure, says virologist and critic Lena Einhorn, who points out that Sweden now has eight times more infected in relation to the population than Finland and three and a half times more than Norway.

“And they should have been worse off than us this fall, because we should have immunity,” she told the Financial Times.

According to the newspaper, the latest figures from Stockholm are that one in five tests is positive. The infection is far more widespread than previously thought.

There are gloomy figures coming from Sweden, and there is little in the figures that indicates that there is any talk of herd immunity. Last week, there were 5,766 new cases in Stockholm alone, and the infection is around 50 per cent higher per 100,000 inhabitants than in Oslo, which is highest in Norway.

At the press conference on Thursday, Anders Tegnell stated that the infection is now on its way into the old people’s homes again, and that last week there were almost 400 infected people in such homes – something he described as a warning sign.

The Nordic major bank says this clearly in its daily report: – European countries are beginning to show a declining trend in new cases, which indicates that better times are ahead of us. Sweden has overtaken both Germany in new cases per capita, it is stated in the daily corona update.

These are ominous signs that the Swedes risk a new wave of deaths, and the statistics so far are dramatically much worse than in Norway.

The Swedish figures show that Stockholm is the worst. Last week alone, there were almost 5,800 new cases of the disease in the city. The capital also had the most infection in the first instance, but there is no trace of any significant herd immunity in the city.

There has been an extensive debate in Sweden to explain the high death rates. As in Norway, corona is particularly prevalent in immigrant communities, and as in Norway, factors such as poor finances, overcrowding and problems with obtaining information have been pointed out. As in Norway, many have been infected and died in nursing homes.

The overall strategy in Sweden is to minimize mortality and disease in the entire population, and to minimize other negative consequences for most people and society.

The seas: The Swedish Public Health Agency’s work with covid-19

In general, Swedish politicians and health authorities have been more careful about shutting down society than Norwegians. Sweden had lower growth in unemployment than in Norway, and has, for example, not yet decided to stop drinking and close restaurants in Stockholm.

In the meantime, the infection is growing stronger than in neighboring countries, and state epidemiologist Anders Tegnell is no longer as free from criticism as before. A new book reveals how Anders Tegnell defied professional advice in the belief in herd immunity – that is, accepting that many were infected, so that the infection would later die out.

Here you can hear the author of the book «Flocken», Johan Anderberg, in an interview with Swedish Radio.

There was also a discussion in Norway as to whether the Norwegian or Swedish strategy was correct. Many warned of huge economic and social costs by shutting down the country, portraying covid-19 as a powerful form of flu.

Today, few believe that we should just let the corona pandemic go its own way. And the Swedes are likely to round up 200,000 cases of illness in a short time.

The book “Flocken” describes how Anders Tegnell was warned by some of the country’s foremost experts against choosing the herd immunity strategy. On March 15, Peet Tüll, former head of the Infection Control Unit, wrote an email to Tegnell outlining three strategies for stopping the epidemic:

Tüll recommended alternative 2, and strongly warned against alternative 3 because it would lead to thousands of deaths and thought it would appear as “a given and headless strategy, which I would never have accepted in my previous role”.

Tegnell replied: – Yes, we have gone through this, and after all landed in 3.

We do not yet know the historical outcome of the corona pandemic. right now there is reason to hope that better treatment and vaccine will in time save Norway many thousands of deaths.

We also have convincing figures that show that it is socially more profitable to shut down and fight the pandemic, or let it burn out and accept enormous social and economic consequences.

In the face of an unknown crisis such as the corona pandemic, no one should be retrospective, but accept that the decisions in March were made under great uncertainty.

But it may be worth recalling philosophy Henrik Syse, who said that morally philosophically it is right to save lives one can save now, and buy oneself time to deal with future problems.

Covid-19 is not a national match between Norway and Sweden, and it will be deeply tragic if posterity shows that our Swedish neighbors chose a corona strategy that cost thousands of lives that could have been saved.

But until now, there is every reason to be happy that we have Camilla Stoltenberg, Espen Rostrup Nakstad, Bent Høie and everyone else who has contributed to the Norwegian elections.

It should also be mentioned that the Petroleum Fund meant that Norwegian politicians had greater financial muscle to buy time than the Swedes.

At the time of writing, Norway has just under 26,000 cases of the disease, while Sweden, which has less than twice as many inhabitants, has six times as many cases (167,000).

PS! What do you mean? Is the Swedish strategy headless or smart? Write your opinion in a reader’s letter!

These were the details of the news covid-19, Coronavirus | New corona wave sweeps over Sweden for this day. We hope that we have succeeded by giving you the full details and information. To follow all our news, you can subscribe to the alerts system or to one of our different systems to provide you with all that is new.